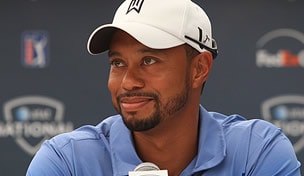 NEWTOWN SQUARE, Pa. – From Torrey Pines to TPC Sawgrass the competitive obituary has been written, premature to be sure, but penned by a surprisingly large number nonetheless.

The most common question used to be, “Have you ever met Tiger Woods?” Now the ubiquitous query is, “Will Tiger ever win again?” With a neon spotlight on ever. Woods has heard the discord in between his daily workouts to right a left leg that’s been wrong for far too long and episodes of “Dora the Explorer.” “That song is just brutal,” he said.

In practical terms, Woods’ winless drought on the PGA Tour now stretches back to the 2009 BMW Championship, 21 months and 20 events for those keeping track of such minutiae.

Fueled by his freefall out of the top 10 in the Official World Golf Ranking and Rory McIlroy’s stunning U.S. Open victory, golf’s new era is upon us and there seems to be little room in the new world order for an ailing alpha male.

But on Tuesday in this tony Philadelphia enclave, Woods didn’t exactly have the look of a dead man walking. Of course, that he was walking at all without the aid of a protective boot or crutches is progress by any measure.

In short order a surprisingly forthcoming Woods revealed that he hasn’t hit anything more meaningful than a putt since walking off TPC Sawgrass after nine holes in May, that there is no time line for his return to the competitive fray, that playing The Players likely set him back physically and that “this one is different.”

“I pushed too hard and hurt myself, and this time around I’m not going to do that again,” Woods said of his rehabilitation and impending return.

Not exactly the same man who once famously told doctors advising him not to play the 2008 U.S. Open where to put their Magnetic Resonance Imaging tests.

As for those who say Woods’ pursuit of Jack Nicklaus’ record of 18 career majors is dead in the water the man of few words offered only this: “He won when he was 46, right? I’ve still got some time.”

Recent history and the polarizing nature of Tiger Woods aside, the all-or-nothing debate over whether Woods is washed up is overshadowed by the realities of time and talent.

Whether he ever chases down Nicklaus’ Grand Slam benchmark is best left to the certainty of time, which, as Woods correctly pointed out, is currently on his side. What does seem certain at the current crossroads is that the last four will be the most difficult.

Whether he ever wins again, however, is a question of semantics. You don’t lose talent. Confidence? Sure. Health? Yep. Desire? Perhaps. But not talent, and throughout all of Woods’ travails the last two calendars no one has ever questioned his talent.

The luster of the one-time Teflon kid has long faded, as evidenced by a surprisingly weak field for this week’s AT&T National that doesn’t include a single player from the top 10 in the world ranking. And a four-times operated on left knee certainly qualifies as an occupational hazard. But the underlying skill that lifted him to 14 majors and 71 Tour titles remains.

By all accounts, Woods has become a model patient. Following doctor’s orders to the letter, dialing back workouts if things get too extreme and breaking tradition by refusing to set a timeline for his return.

“It’s time to actually have a different approach. It’s time,” he reasoned.

Of all the titles Woods has been fitted for the last few years this one may be the most surprising – Tiger the pragmatist.

So it is that, in practical terms, a return in time for the British Open seems about as likely as a Cubs’ pennant run, opening the door for speculation that he may eventually call it a year. From there the rumors of his demise will only grow louder.

Whether he can ever truly “come back” from the depths of his professional abyss is unknown, but this much is certain – he will begin his climb back to the top of the pack with the same level of talent, and by many accounts dedication, that he had before his body and his misbehaving put a pause on his historic career. Whether he ever wins again remains to be seen, but what is certain is that he’s not done trying.