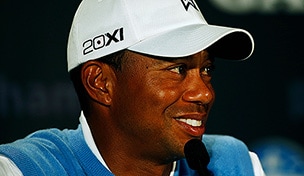 Getty Images
PARAMUS, NJ - AUGUST 22: D.J. Trahan plays a shot during the second round of The Barclays at Ridgewood Country Club on August 22, 2008 in Paramus, New Jersey. (Photo by Hunter Martin/Getty Images)  -

PITTSFORD, N.Y. – Maybe he’s had enough of run amok expectations. Or perhaps he’s just finished playing “what if” with the media. Either way, Tiger Woods seemed utterly at ease with his distinctions between what differentiates a great season from merely a good one.

For the world No. 1, the varying shades of competitive gray have much more ambiguity than the press, and perhaps even a portion of the public, care to allow. The question du jour at Oak Hill, site of this week’s PGA Championship, was how Woods would assess his play in 2013.

“This year, for me, I think it's been a great year so far for me, winning five times, and you look at the quality of tournaments I've won, a Players and two World Golf Championships in there, that's pretty good,” Woods said.

Normally, it’s best to leave such esoteric questions in Woods’ hands. He is, after all, the only one who really knows the state of his game beyond the inconsistencies of statistics and nuanced results.

A split second before, however, Woods had already head-butted the Grand Slam elephant in the room by figuring: “I think winning one major championship automatically means you had a great year. Even if you miss the cut in every tournament you play in; you win one, you're part of history.”

You see, asking Woods if he considers 2013 a “great” year is really code for, how much pressure are you feeling as the major season inches toward the locker room and you continue to find yourself mired at major No. 14.

Who knew the 15th would be the hardest?

“It kind of seems that way. It's been probably the longest spell that I've had since I hadn't won a major championship,” he said. “I've certainly had my share of chances to win. I've had my opportunities ... probably half of those Sundays for the last five years where I've had a chance, and just haven't won it. But the key is to keep giving myself chances, and eventually I'll start getting them.”

To Woods’ point, he’s hardly been a non-story since that historic Monday at Torrey Pines. He has six top-5 finishes in his last 17 majors since he last hoisted Grand Slam gold at the 2008 U.S. Open, including a tie for fourth this year at Augusta National and a tie for sixth last month at Muirfield.

It has been a great season by any measure, even by Woods’ lofty litmus test, but it was hard to shake the notion that if five wins – albeit quality wins – without a major victory is a great calendar has the bar been lowered, however slightly, in the wake of Woods’ Grand Swoon?

“No,” Woods curtly answered when asked if he’s adjusted his standards for success.

This is worth noting only because for the better part of Woods’ historic career his competitive world revolved around the majors. Collecting titles at Bay Hill, Doral and Firestone were nice, but on the cosmic scorecard it was the Grand Slam starts that counted.

Consider that in 2008 Woods had four wins – including his Torrey Pines Open, a World Golf Championship (Accenture  Match Play) and a runner-up showing at the Masters in just six starts.

In December of that year, Woods was asked if he voted for Padraig Harrington – who had just two victories that season at the Open Championship and PGA Championship – for PGA Tour Player of the Year

Perhaps the danger here is confusing appreciation for apathy. Woods plays the toughest golf courses against the deepest fields, he doesn’t get a night off and, as he’s matured and endured more than his share of injuries, he’s realized no one is bulletproof.

Maybe, as he explained Tuesday, winning majors is a combination of solid play and a few good bounces.

“I was saying to a lot of you guys last week, that's how I played at the British Open,” said Woods, who lapped the field last week at Firestone by seven strokes. “The only difference is I made more putts last week. I hit it just as good at Muirfield, and didn't make any putts the last three days. At Firestone, I putted well, but I hit the ball just the same.”

That Woods has momentum on his side following last week’s walkover and a good handle on Oak Hill also factors into his great vs. good take on 2013.

Ever the optimist, the Donald Ross gem was always going to be his best chance to break out of his Grand Slump. Driver troubles slowed him in 2003 at Oak Hill, but he estimated he will only hit driver two to five times a round this week depending on the conditions and played surprisingly aggressive on the weekend at Firestone.

The only question this week is which guy shows up on the greens – the one who rolled the field last week in Ohio or rolled in nothing last month in Scotland.

For Woods, there is still time on the clock to turn what he said has been a great season into something truly special.