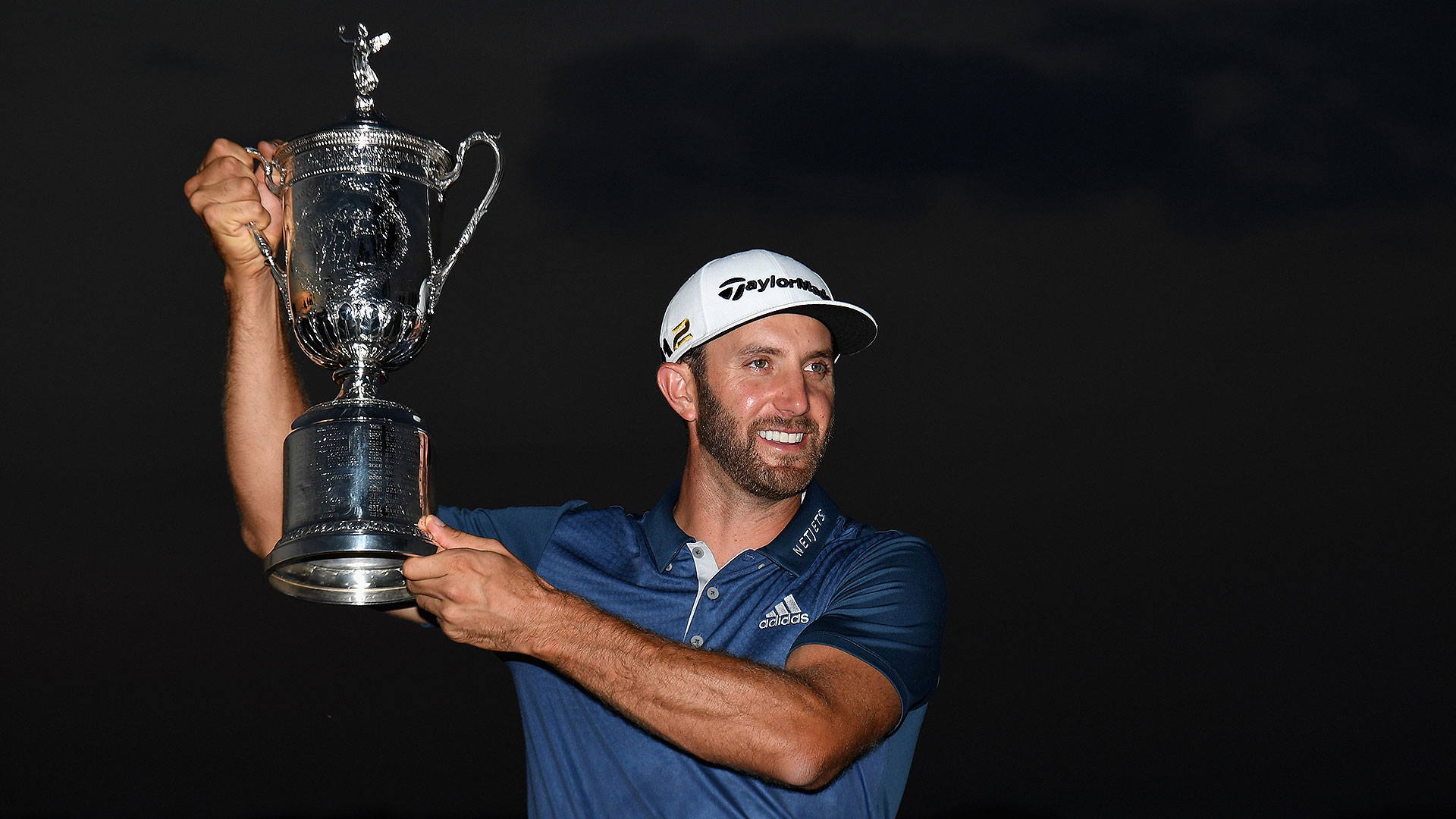 OAKMONT, Pa. – For a guy who’d found all manner of ways to lose a major, this was a stunningly new twist.

The man who can move a golf ball insanely long distances was drawn into a “he said, he said” with the USGA over a golf ball that nudged a fraction of an inch at the worst possible time on Sunday at the U.S. Open.

Did Dustin Johnson cause his ball to move as he prepared to putt on the fifth green?

Had he unwittingly run afoul of the rules, again, or were gravity and insanely fast greens to blame?

This time it didn’t matter. DJ made sure of that with a performance that will be remembered as equal parts surreal and special.

Johnson, the sometimes troubled and infinitely talented 31-year-old bomber who had come painfully short so many times, won his major in convincing fashion – closing with a 68-turned-69 thanks to a bizarre rules violation that nonetheless left him three strokes clear of the field.

Although never one to get caught up in minutia, Johnson would be forgiven if he recalls his Oakmont breakthrough as a four-stroke triumph – the margin he would have won by had he not run afoul of yet another rules snafu – but then the U.S. Open trophy thankfully doesn’t come with small print or asterisks.

Instead, Johnson will recall starting the final round four strokes adrift of Shane Lowry, who is best described as a jolly, bearded giant, following a worst-of-the-week 71 in Round 3.

Major championships aren’t won on Sunday mornings, but Lowry seemed to score a moral victory when he completed his delayed third round early on Father’s Day with two birdies over his final four holes for a four-stroke advantage.

But there are two things at Oakmont that are in short supply – trees and guarantees, no matter the size of one’s lead or heart.

For three days there was the distinct feeling that the golf world had thrown a party and the guest of honor was a no-show, with Oakmont playing soft and soggy.

Lowry entered the final turn at 7 under par, the same number eventual champion Ernie Els was going into Sunday at the ’94 Oakmont Open when the beast played to a beautiful par of 71.

For three days, however, Oakmont masqueraded as a par 70 that was left defenseless by torrential rains on Thursday.

But on Sunday Oakmont became painfully familiar, like a recurring nightmare or a visit to the dentist, and Johnson’s plan of persistent punishment worked to perfection.

“Winning any tournament, there's a lot of satisfaction, but to get it done in a major, especially I've been so close so many times, it's just an unbelievable feeling,” said Johnson, who dominated the field tee to green. “It's hard to even describe.”

Johnson birdied the second hole after driving to the edge of the green and he seemed to sidestep the type of fateful mistake that cost him in the past when his ball moved as he prepared to hit his par putt on the fifth green.

Johnson told the walking official he hadn’t grounded his club and he was advised there had been no rules violation, but we’ll come back to that.

A birdie at the ninth moved Johnson into a tie for the lead and Lowry continued his free-fall with back-to-back bogeys at Nos. 9 and 10.

It was at the 12th tee when things began to unravel in far too familiar fashion for Johnson. There were no wayward drives, no untimely three-putts, no mental lapses which have haunted him in the past.

Instead, it was Jeff Hall, the USGA’s managing director of rules and competition, who informed Johnson that officials planned to review the ruling from the fifth green after the round and that he might be penalized a stroke.

“We agreed that we were concerned about what we saw and felt obligated to have a conversation with Dustin about it, and the 12th tee presented the best opportunity to do that,” Hall said. “We told him that what we saw was a concern, but we also asked him a couple of questions.”

For seven holes Johnson, who steadfastly contended he did nothing to make his ball move and shouldn’t have been penalized, battled indecision, an increasingly difficult golf course and an assortment of some of the best players in the game – including world No. 1 Jason Day, who cut the lead to three strokes at one point.

Sergio Garcia, who also made a run on Sunday, once opined that he felt like he was playing more than the field at major championships.

On Sunday at Oakmont Johnson would have been forgiven if he felt similarly out-gunned against the field if not the rules committee.

“At that moment there was nothing I could do about it. Let’s just focus on that shot and go from there,” Johnson said. “This golf course is very difficult. It’s very difficult to close, so from 12 to 18 I just tried to focus on what I was doing.”

That Johnson would make the peculiar and largely panned ruling irrelevant with a dominant performance only added to a moment he’d been denied so many times.

For a player who some considered incapable of dealing - or unwilling to deal - with major championship pressure, Johnson put on a clinic in crisis management.

After three-putting the 14th hole for bogey, Johnson played a perfectly U.S. Open round of golf with pars at Nos. 15, 16 and 17 and a towering approach to 5 feet at the last.

The man who had three-putted the last green at last year’s U.S. Open to lose by a stroke, who grounded his club in a dirt-patch hazard and was penalized two strokes at the 2010 PGA Championship, who had stood on the edge of major glory so many times and failed, refused to allow fate and an unfavorable rub of the green to keep him from his major.

“Just one more thing to add to the list, right?” he figured with a smile born from his ability to overcome adversity.

Throughout Johnson’s eventful career, which now includes victories every year for nine consecutive seasons, he’d spoken of when, not if, he’d win a major and at Oakmont he broke free of the Grand Slam gloom on his own terms.

“It’s validation for all the work he’s done, on the golf course and off the golf course. Regardless of who you are each near-miss, and he’s always processed this stuff differently than anyone else, but the clock’s always ticking and the questions just grow and grow,” Johnson’s manager, David Winkle, said. “Now he will have a little bit of relief.”

When Johnson eased his birdie attempt into the hole at the last he flashed a rare show of emotion, hugged his fiancée and son and was met by Mike Davis, the executive director of the USGA.

The moment was a perfect metaphor for so many years of frustration and major futility.

Congratulations on winning the U.S. Open, now add one.