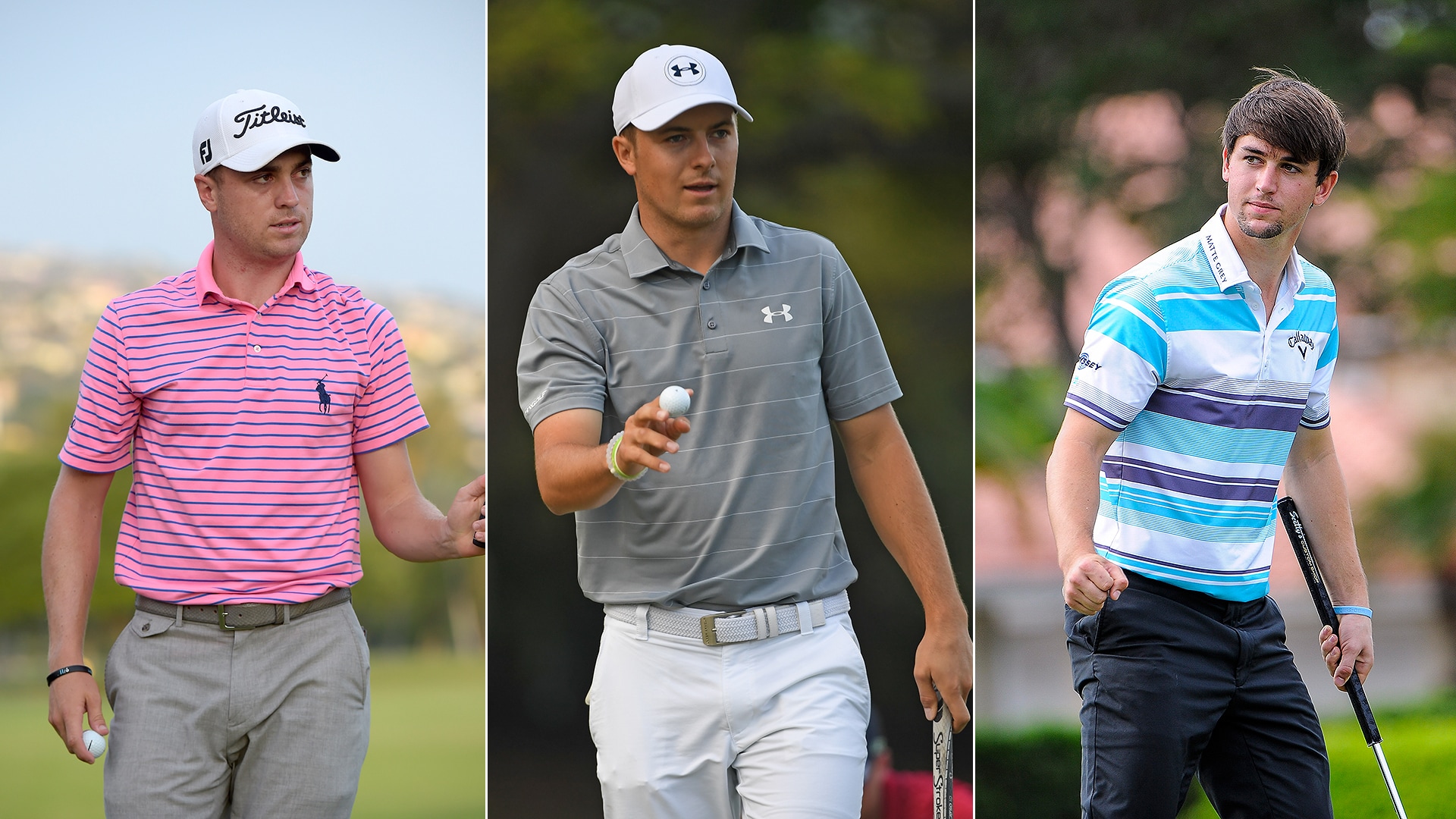 HONOLULU – Six years ago this week Justin Thomas was wrapping up his senior year of high school and readying for college life at the University of Alabama.

Ditto for Jordan Spieth, who was bound for Texas, and Ollie Schniederjans, who had signed to play golf for Georgia Tech. All told, there are at least 10 players from the high school class of 2011 who currently have day jobs at golf’s highest level – the PGA Tour.

Spieth has won eight times in the big leagues, including two majors. Emiliano Grillo was voted the 2015-16 Rookie of the Year thanks to his victory at the Frys.com Open, and Daniel Berger outdueled Phil Mickelson, no less, to win the 2016 FedEx St. Jude Classic.

And now there is Thomas, the rail-thin, high-flying jokester of that ultra prolific class, forging a legacy that seems blatantly absurd. After holding off Hideki Matsuyama last week at the SBS Tournament of Champions and winning the year lid-lifter by three strokes, he became the first of the group to shoot a 59 in a Tour event on Thursday at the Sony Open.

“It reiterates the journey we've all been on to get out here from when we've been playing together since we were 12 years old, or 13 years old,” said Spieth, who is alone in ninth place at Waialae Country Club.

“Our whole class. There was no doubt, whether we believed it was as hard as it is or not, we just chose to shrug it off, and hey, we're just going to go to the next level and the next level.”

There have always been young players who crash through barriers, with Tiger Woods being the best example of preconceived expectations. But the class of ’11, collectively, has gone next level.

Although they largely took different paths to the Tour, they’ve all arrived with the same unbridled ambition and fearlessness.

“It’s fun to watch this breed of player come out because everybody has talked about the fact they hit it further than anyone else, but nobody talks about the scores they are shooting,” Charles Howell III said of Thomas’ 59. “To come out on this course, which is a tricky golf course, and the guy shoots 59.”

There is no shortage of reasons why the class has blown through the normal Tour learning curve and age ceiling.

Junior, amateur and college golf have never been more honed to groom success than they are now. Events at all levels are played on better golf courses and the best players have access to the most modern training techniques and fitness programs.

But the class of ’11 goes beyond those normal assumptions. They were prepared, physically, mentally, emotionally to play at the highest level from the opening tee shot. They didn’t earn their Tour cards and expect a few years of tough lessons like so many young players in the past.

There’s also something to be said for the group’s shared competitive history.

Beating, for example, a future major champion or multiple Tour winner can have a profoundly inspiring impact on a player like Schniederjans, whose mind quickly drifts back to the group’s junior days.

At the 2008 Polo Junior Classic at PGA National, he recalls, Schniederjans beat Grillo in the quarterfinals and Trey Mullinax in the finals to take the title. A year later he finished second to Grillo at the Ping Invitational, well ahead of the likes of Spieth and Thomas.

There’s also no ignoring Woods’ influence on the class. In the last 2000s, the 14-time major champion was regularly winning, instilling from afar that it was simply the way of the world

“I'd say it's because of him, honestly," Thomas said. "I think what Tiger did, you can't put into words what he did and continues to do for this game. I got into golf, as much as I did, watching him play. I knew he was in his early 20s and winning majors.”

It’s only apropos that Thomas’ current run is very much Tiger-like, with the 23-year-old 18 holes away from winning his third event in his last four starts.

It’s not a comparison to Woods, which is always a wildly unfair bar to set, as much as it is an explanation, a rationale behind the collective success of the class of ’11.

Like Spieth, Thomas isn’t prone to bouts of bragging, for the new breed it’s best to let the results sing your praises; but asked his thoughts on the class’ success his answer was the best explanation to date.

“I'm trying to think of how to say this without sounding really arrogant, but I just think we're all good. I think we're all very accomplished,” he said. “We've won at every level we've played.”

That they’re now winning, and dominating, at the highest level is nothing more than a logical progression.