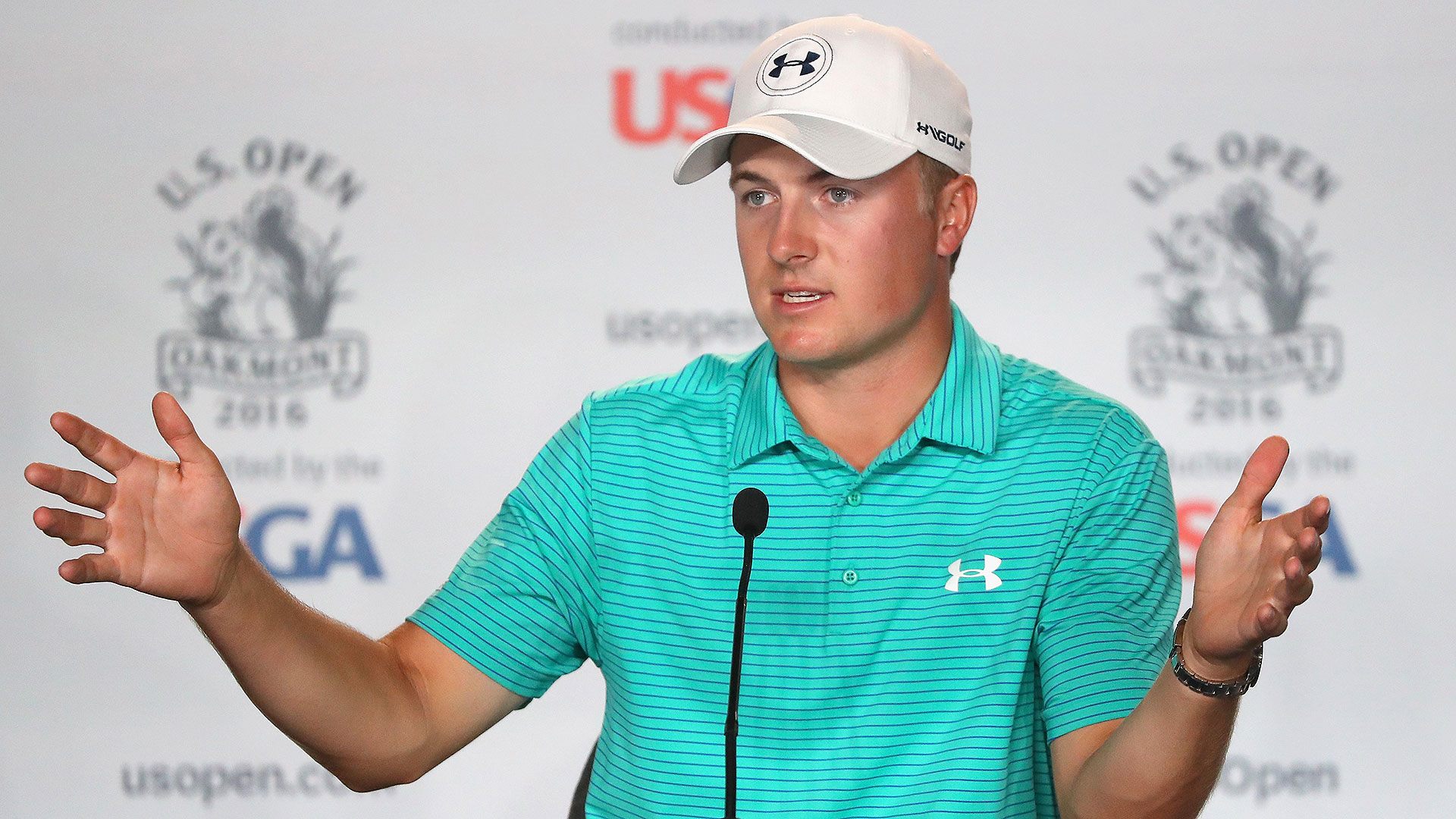 OAKMONT, Pa. – The last time Jordan Spieth settled in front of microphone in a USGA media tent he was the undisputed heavyweight champion.

He’d just survived four surreal days navigating the brown and bouncy moonscape of Chambers Bay to claim his second consecutive major championship and would win his very next start at the John Deere Classic.

He’d flirt with history at St. Andrews, coming within a few blades of fine fescue of claiming the third leg of the single-season Grand Slam, and would cruise to PGA Tour Player of the Year honors.

Fast-forward a year, to Monday’s media meet-and-greet at Oakmont and the 22-year-old wunderkind still flashes the same boyish smile and subtle confidence, but there are now questions that didn’t linger 12 months ago.

In his last Grand Slam start, Spieth blew a five-stroke lead with nine holes to play at the Masters. He’s moved on, he said, and his victory late last month at the Dean & DeLuca Invitational is evidence of that.

“Honestly, I think it's out of our heads now just from that one experience at Colonial,” Spieth said when asked if his Masters meltdown still lingers.

There’s no reason to doubt Spieth and he’s shown an amazing amount of resilience in his young career, yet as he spoke on Monday there wasn’t the same air of invincibility that loomed when he outdueled Dustin Johnson last year in the Pacific Northwest.

After opening his year with a convincing victory at the Tournament of Champions, Spieth looked tired through the rest of the West Coast swing and into the Masters, posting just a single top-10 finish in five Tour starts.

He missed the cut at The Players and began the final round in second place, just two shots behind Brooks Koepka, at the AT&T Byron Nelson only to close with a 74 to tie for 18th place.

He’s also been overtaken by Jason Day atop the Official World Golf Ranking and in the eyes of some golf fans following the Australian’s victories at the Masters, Bay Hill and The Players.

But beyond the crowded field of potential favorites each week in golf and the recent ebbs and flows of Spieth’s career, it may have been the setting, brutish Oakmont, site of this week’s U.S. Open, that makes the defending champion seem somehow less imposing.

Although he’s proven to have a game that travels, with victories at a variety of golf courses from East Lake to Innisbrook, an examination of his record shows a less-than-stellar record at traditional U.S. Open venues.

With the exception of the last two U.S. Open sites – last year at Chambers Bay and in 2014 at Pinehurst, both of which featured no rough and bouncy conditions, he’s missed the cut (Merion) and finished tied for 21st (Olympic Club) in 2013 and ’12, respectively, at his national championship.

It’s a curious - and perhaps far too nuanced - distinction for a player who has proven himself adept on some of the most challenging layouts; but given the severity of this week’s test it’s not entirely unfounded.

Intellectually, Spieth’s relatively pedestrian record on traditional Open-style courses doesn’t add up. Among the game’s best players he i largely consistent off the tee and his brand of low-technique, ultra-feel putting is perfect for greens like those at Oakmont.

Spieth seemed to suggest as much when asked the keys to victory this week.

“I think the most interesting thing I found here was looking back into '07 [the last time the Open was played at Oakmont], and I think out of the top 10 finishers in the tournament, maybe one or two of them were actually in the top 10 of the guys that hit fairways, and that really shocked me,” Spieth said. “That goes against everything I've been saying, which is you've got to put the ball in the fairway off the tee here, or else it's so hard to just hit it around the green, let alone on the green. . . . I can't seem to fathom why.”

He conceded that Oakmont will be a vastly different test from Chambers Bay and certainly Augusta National, where there is room for mistakes off the tee, and stressed that he’s up to this week’s challenge.

Spieth has preached all along that 2015 was a magical year not easily duplicated, but the heightened expectations born from his historic run through the majors leaves precious little room for a benefit of the doubt.

Spieth is still among the favorites this week at Oakmont – dominant on occasion, human at other times in 2016 – just not the favorite like many believed him to be at this point last year.