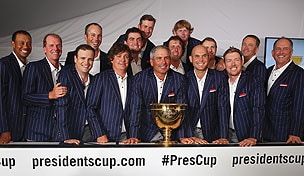 Getty Images
Michael Tobiason hopes that his putt will find the cup and drop in on Big Break Greenbrier.  -

DUBLIN, Ohio – The exhibition felt more like another evisceration.

How about this: Despite some truly inspired performances by International captain Nick Price’s team, the only time the American team found itself in harm’s way over four damp days was when a wayward squirrel named Sammy crashed the team room.

As hard as Price & Co. planned and plodded to make this Presidents Cup a game, this wasn’t a fair fight. It hasn’t been for some time, but a fitful week of starts and stops at muddy Muirfield Village proved to be the latest indication of the event’s lack of relevance.

“This is a pretty tall order,” an emotional Price allowed after the final foursomes collapse set up the singles formality on Sunday. “I just hope the golfing gods are on our side this afternoon.”

It’s not a higher power that has rendered this biennial bash a non-story. That liability rests on PGA Tour commissioner Tim Finchem’s shoulders.

Earlier this year Price, former captain Greg Norman and future captain Ernie Els pleaded with Finchem to give the Internationals a fighting chance and reduce the number of foursome and fourball matches, the idea being fewer team bouts would favor the Rest of the World’s perceived lack of depth.

Instead, Finchem allowed for a format change – this year’s event started with a fourball session instead of foursomes, with which the Internationals have struggled – and the United States rolled to an 18 ½ to 15 ½ victory to improve to 8-1-1 in the matches.

And it really wasn’t that close.

Don’t get it twisted – the Internationals fought. They fought like a wild squirrel trapped in an assistant captain’s golf cart. But when Round 4 play finally ended early Sunday the visiting team was down 14-8 and the home side needed to win just four of the 12 singles matches to keep the cup.

It would have been the largest comeback in Presidents Cup, or Ryder Cup, history. The Internationals needed a Medinah-like miracle and then some. But then the Europeans only had to dig themselves out of a four-point hole and they had Ian Poulter.

For Davis Love III, last year’s Ryder Cup captain and an assistant this time for Fred Couples, the déjà vu was impossible to ignore.

“We flashed back last night,” Love said. “It was me and Fred and Jay (Haas) and Tiger (Woods) and Phil (Mickelson) and Hunter (Mahan) talking about how we were going to do the pairings. It was hard for me all week because I felt so bad about it. It was like, here’s what we said we were going to do at Medinah, we know now.”

Mahan, in the singles leadoff position, set the tone, quickly dispatching surprise rookie standout Hideki Matsuyama, 3 and 2, and Jason Dufner added another point when he beat another newcomer, Brendon De Jonge, 4 and 3.

There were tense moments after the Internationals won four of the first six matches. Couples, who is notoriously low key, may even have felt nervous with five matches remaining on the course. The math was straightforward: If the International team won the final five matches they would force a tie.

“I must have asked 500 times, ‘How are we getting this fourth point?’” Couples said.

The answer? Tiger Woods. Who else?

Sent out in the ninth spot, it seemed unlikely the world No. 1’s point would count, but shortly after a particularly forceful swing at the 15th hole nearly sent Woods to his knees with back pain, it became clear his point would be pivotal.

Woods took a 1-up lead when little-known Richard Sterne hit into the grandstand at the 16th hole, then calmly two-putted from 36 feet at the last to secure the winning point for the third consecutive Presidents Cup.

“I was just trying to hang on,” said Woods, who found a new partner at Muirfield Village in the form of Matt Kuchar. “The problem was, I knew I wasn't feeling good, and if I happened to mess up 18 and we had to continue playing until it's been decided. I was like, 'I really don't want to play anymore. Just can I win, can I halve this last hole, somehow?' And it ended up being that way.”

This marks the fifth consecutive match that the Internationals failed to finish closer than three points to the Americans and the title drought has now been run to 15 years.

It wasn’t all gloom and doom for the Internationals. A pair of young stars emerged in Graham DeLaet – think Poulter without the wardrobe stipend – and Matsuyama and two long-term potential power pairings in DeLaet and Jason Day and Matsuyama and Adam Scott.

Combined, those four players contributed 11 points and considering his team included seven rookies and little room to hide any weaknesses, Price’s post-match assessment was only slightly less dark than the gray skies that blanketed Muirfield Village for most of the week.

“Our rally this week in a couple of the sessions, and particularly today, showed how much fight we've all got in us,” Price said. “We all wanted this badly, but 9 ½ (points, what his team needed to win the cup in the singles session) is almost an unobtainable task.”

Even Els, whose inevitable turn at captain seems certain to wait considering his play at this week’s matches (3-2-0), allowed for a glimmer of hope the next time the Rest of the World meets America’s best in 2015 in Korea. “It’s closer than you think,” he said.

Perhaps, but from 30,000 feet this still has all the markings of a homecoming game for the United States.

If International captains past and present really want to turn the tide in the biennial blowout they may want to make another run at Finchem in an attempt to increase the number of singles matches. The U.S. has won just one of the last three Sunday singles sessions at the Presidents Cup and we all know America’s singles record in the Ryder Cup.

But on Sunday, Medinah and The Meltdown felt like another lifetime for the Americans.

Relaxed, if not rested, the U.S. side responded to nearly every move Couples made at Muirfield Village, the byproduct of the captain’s laid-back lead and a six-point advantage heading into the final frame.

Media types always want to know why the U.S. team plays so well at the Presidents Cup but tightens like an ailing Achilles’ at the Ryder Cup. The answer could be found in Mickelson’s mood Sunday as players marched out to end the muddy marathon.

“This morning everybody was worried about when their tee times were and Phil comes in and says, ‘I tell you what. I’m going last and I don’t want my point to count,’” Love said. “You guys get out there and win this thing. I want to come giggling down the fairway.”

Like clockwork, only the Americans were giggling at the Presidents Cup.