Vigilance is key for Tour's security since '96 incident 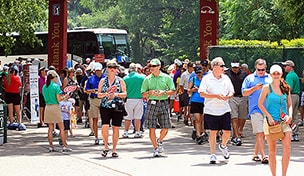 Fans lined up to brave the elements and Sunday’s extended matches at the WGC-Accenture Match Play Championship grumbled as they waited to pass through security, but – as is the case in nearly every avenue of modern life – they endured the wait and moved on.

Following last year’s bombing at the Boston Marathon, the PGA Tour’s enhanced security measures – including wanding and a limit on bag size – is widely considered the price of vigilance and the twisted realities of a dangerous world.

Even the Tour’s own website seemingly references the incident on a page explaining the new procedures, “Due to the events earlier this year and heightened security measures across our nation, the PGA Tour will . . . expand screenings for all patrons, sponsors, volunteers, media and vendors attending or working at all events.”

But shortly after the two finalists set out on Sunday at Dove Mountain, commissioner Tim Finchem’s mind raced back nearly two decades to another incident that, although not even remotely as devastating as the Boston bombing, was nonetheless alarming for Tour officials.

“We had an incident in Akron (Ohio), quite a while ago. Back before 9/11. There was a device that had exploded on the first tee. The final group had left the first tee, everybody had left. Nobody got hurt,” Finchem recalled.

“There wasn’t much to it. Whoever did it, my recollection is, they put it in a trash can and that sort of contained it. It was homemade, it wasn’t a significant thing. It just reinforced to us that while our fans are really solid fans, anyone can get in.”

The incident occurred in the 1996 NEC World Series of Golf  just as the leaders, including Phil Mickelson, set out at Firestone Country Club. The report filed with the Akron Police Department considered the incident a “dangerous ordinance” which caused “minor injuries” to a few fans but no major damage.

Although no one was seriously hurt, and the incident received little attention in the press, it prompted an intense evaluation of the circuit’s security policies.

“That got everybody’s attention,” said Jim Cook, the tournament director at the Tour’s Akron, Ohio, stop in 1996. “That incident came down to being a prank and the Tour took very strong action and made it a priority because of the access fans have to players at a golf tournament.”

The Tour’s policy has evolved from that incident and during last year’s winter meetings of the tournament directors, the circuit held a special break-out session with security officials to go over the policy adjustments.

Some have suggested that one of the byproducts of the new procedures, specifically the added cost of screening at entry points, is that some tournaments, like the Northern Trust Open two weeks ago, have closed their Tuesday practice rounds to the public.

One tournament director estimated the additional security costs to tournaments would range between $10,000 and $20,000, and if tournaments are not selling enough tickets to cover expenses on Tuesday they have discovered it’s better to simply keep their gates closed, although Finchem dismissed that cause-and-effect relationship.

“I don’t see a correlation,” he said. “In some markets it seems like some tournaments have concluded that when they do that it helps their tournament out later in the week and they like that.”

“Heck no,” said Kym Hougham, the executive director of the Wells Fargo. “We have thousands of people out there on Tuesday. You can save a lot of money (closing Tuesday rounds), but there are some of us that do a good business on Tuesday.”

Last year’s Wells Fargo Championship was held just three weeks after the bombing in Boston and for Hougham the policy changes were easy choices. Simply put, whatever tradeoff individual tournaments and fans may have to endure is the price golf has to pay.

No athlete in any other major sport is as exposed to potential threats as professional golfers.

“We’re out here on 200 acres of property with 40,000 or 50,000 people sometimes,” Finchem said at Dove Mountain. “You have to be real careful and do anything you can. That’s when we up scaled it. Anything we have done since has just been to fine-tune it.”

Completely securing 18 holes will never be an option, and last year’s bombings in Boston brought that reality into sharp focus. But for Finchem and the Tour, doing nothing is not an option. It was a lesson learned on a summer Saturday in Akron, Ohio, 18 years ago.

“We’re always looking to upgrade security. Security in today’s world has to be as vigilant as you can make it and we ask ourselves, are we doing it as good as we can? How can we do better?” Finchem said.

In that context, longer lines to get into PGA Tour events doesn’t seem like that big of an inconvenience.