Web.com Finals not perfect but an upgrade over Q-School 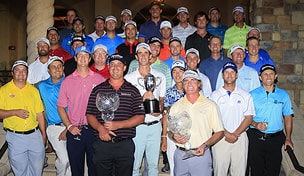 Getty Images
MARANA, AZ - FEBRUARY 24: Tiger Woods walks off the first green with his caddie Steve Williams during the Championship match of the WGC-Accenture Match Play Championship at The Gallery at Dove Mountain on February 24, 2008 in Marana, Arizona. (Photo by Scott Halleran/Getty Images)  -

PONTE VEDRA BEACH, Fla. – When you ask soon-to-be senior Joe Durant about his Q-School history he waves his hands defensively and offers a metaphorical white flag: “a lot of times.”

After 17 full seasons on the PGA Tour and almost as many bouts with the Fall Classic, Durant’s assessment of the circuit’s new qualifying system which concluded Sunday at TPC Sawgrass is unapologetically positive.

“When this thing gets a year or two under its belt – just like the FedEx Cup it took some tinkering,” Durant said. “It’s a better format, honestly. When they went to 25 cards at the Finals, it’s tough. If you’re off a little bit, with the caliber of play you’re done.”

As only Durant could provide, his take on the four-event Finals is that it is an improvement over the previous model, but – as he tactfully concludes – the new process is not exactly a finished product.

Twenty-five 2013-14 PGA Tour cards were doled out on Sunday following the final round of the Web.com Tour Championship, although it took a team of Ponte Vedra Beach, Fla.’s biggest brains to explain it to anyone with a few hours to kill and a healthy attention span, along with 25 to the top regular-season money winners on the Web.com Tour.

Only the Tour’s new qualifying system could make the FedEx Cup math seem like second-grade arithmetic.

Despite the confusion, the new process was largely applauded by those who endured the four-week experiment, but that’s not to say the Finals was without flaws.

“Some guys would say it’s unfair because it only took you one week (to earn a Tour card), but Q-School basically comes down to playing good one week. It just has to be the right week,” said Durant, who managed to finish inside the top 25 with his tie for eighth. “As a player, I like this system better because I can afford a bad week.

“The flip side is I’ve made every cut (in the Finals) but I’ve been on the outside (of the top 25) and looking in until this week.”

The elephant in the new qualifying process room was always the misnomer that the final stage of Q-School was the ultimate pressure point. Truth is, second stage was a much more compelling, albeit largely overlooked, event.

For many, a washout at second stage meant an entire year toiling in golf’s minor leagues and playing for a fraction of the prize money on both the Web.com and PGA tours. But if you made it to the six-round final stage players were assured of status on the secondary circuit at the least.

“When I was going through second stage it was the hardest and (final stage) was just gravy,” Chad Campbell said. “Back then I didn’t have anything. It was life or death whether I got through.”

That urgency was largely absent throughout the inaugural Finals run. In fact, given the explosive nature of the four events the new system has created a competitive indifference for most of the series, with players dismissing poor performances like a long-suffering Chicago Cubs fan: “There’s always next week.”

Consider Andrew Loupe, whose run-up to the finale at TPC Sawgrass was an alphabet soup of competitive mediocrity – MC (Hotel Fitness Championship), MC (Chiquita Classic), WD (Nationwide Children’s Hospital Championship). Yet the 24-year-old needed only a tie for sixth place at the finale to earn a Tour card for next season.

“It’s turned into four one-week Q-Schools,” Jason Gore said. “I wish over the course of time you could have four 15th-place finishes and get in, something that rewards consistent performances over just one good week.”

There was also push-back from some players who had already earned their 2013-14 Tour cards via regular-season Web.com Tour earnings, but were lapped in the Finals in the priority rankings.

Players like Jamie Lovemark, who finished 12th in regular-season earnings on the secondary circuit to secure his card but struggled in the Finals and will enter next season 39th, out of 50, in the priority rankings, which dictate which events a player can enter.

“It is hard to see guys who I beat on the regular-season money list, by a good amount, pass me with one decent finish,” said Lovemark, who tied for eighth at TPC Sawgrass for his best showing in the Finals. “You kind of feel like you should have a little more weight for the top 25 guys (regular-season money winners), but I’m sure that will probably be tinkered with in the future just like we did with the FedEx Cup.”

Players like Will Wilcox and Benjamin Alvarado, regular-season card winners who didn’t play any of the Finals events, will begin next season at the bottom of the class and will likely struggle to get into fields when the Tour begins its West Coast swing early next year.

Like the FedEx Cup playoffs, which will likely go through another points overhaul before next season, the Finals series is a work in progress, but the ultimate benchmark for any qualifying system, identifying the best players, seems to have been achieved.

“It’s probably going to be a better identifier over four tournaments than six rounds on two courses (Q-School),” David Mathis said. “At Q-School you played one course where the fairways were big and the weather was perfect, where now we play different golf courses where the wind is blowing with different grasses. It’s a better test that way.”

Even with its first-year blemishes, the Finals represents an upgrade over the previous model. But then it always had one thing going for it in the minds of professionals: It’s not Q-School.