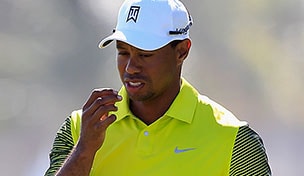 DORAL, Fla. – In 2009 at the PGA Tour’s annual south Florida siesta, Henrik Stenson stripped to his underwear to hit a shot out of a water hazard. On Friday at the new and improved Doral, the entire field felt like they’d been pants-ed.

On a windswept Friday, the combination of architect Gil Hanse’s handiwork, Donald Trump’s maniacal vision of building the Tour’s hardest golf course and what can only be described as Mother Nature’s mean streak conspired to embarrass all of the world’s best – not just Tiger Woods.

Consider that over the last 36 holes the world No. 1 hit four shots into various water hazards – wash, rinse, repeat – No. 3 Henrik Stenson hit a shank and No. 5 Phil Mickelson hit a wall after rattling off three consecutive double bogeys.

We don’t want to overstate Friday’s gale, but at one point Naples blew by.

For Woods, his 1-over 73 in Round 2 could only be considered a victory of sorts. Although the defending champion finished two rounds at 5 over, his post-round optimism didn’t seem misplaced considering a Blue course that suddenly seemed like the Monster of old.

“Just had to grind it out,” Woods said. “When we made the turn there were nine guys under par and now there are (four).”

Tour types are not normally the best sounding boards for golf course design; as a rule professionals would much rather err on the side of the Coachella Valley over Carnoustie, but as Stenson marched down the third fairway his take was poignant enough to take seriously.

“I don’t think too many players are having fun today,” the Swede said.

For Woods, the roller coaster of Round 2 – he had five bogeys and four birdies – came against the backdrop of an ailing back that caused him to withdraw from last week’s Honda Classic with five holes to play, and the rigors of 35-mph wind gusts and 26 holes on Friday.

“I’m a little bit sore right now, long day,” said Woods, whose opening 76 was his highest score ever at Doral in 40 career rounds on the Blue Monster. “It will be nice to get some treatment tonight and be ready tomorrow.”

The rub is that he will have a fighting chance on Saturday despite finding water hazards at the third, eighth and 15th holes in Round 2. To be fair, more than 100 golf balls found the suddenly ubiquitous water hazards on Friday.

“I contributed to that number,” Woods smiled. “One of them was a perfect shot right down (No.) 8, right down the middle of the fairway with a 3-wood. Just ran out too far.”

Woods would save par at the par-5 eighth - in fact his third shot from 197 yards hit the hole and nearly dropped for the most unlikely of eagles - and he added a 92-foot birdie putt at the par-3 fourth hole which ranks as the longest made putt on Tour this season ... by 18 feet.

It all added up to a 5-over total to begin Round 3, just six strokes off the pace set by Patrick Reed, Dustin Johnson, Matt Kuchar and Hunter Mahan.

But Woods stopped short of dubbing the new Doral unfair, questioning instead the setup of the layout considering Friday’s fierce forecast.

“Some of the pin locations were a little bit on the edgy side because of the wind direction,” he said. “You just couldn’t get the ball close. From that standpoint, it was right on the teetering point.”

As Woods marched down the seventh fairway, however, Donald Trump watched the day’s happenings with neither a hint of surprise nor remorse.

“They haven’t even set it up hard,” said Trump, who estimated the winning score would be around 8 under, less than half of what it took to win the World Golf Championship last year.

Luckily for Woods & Co. there is no cut at the Cadillac Championship nor will there be near as much wind on the weekend. The forecast calls for 10- to 15-mph breezes the rest of the way and no rain, which will likely feel like a cosmic mulligan for those who weathered firestorm Friday.

“Basically, you’ve got to hang around. You just never know,” said Woods, who left the property without going to the practice range or receiving treatment on his back. “We’ve all got a shot at it now. No one is going anywhere.”

Nor was anyone going low on what turned out to be the fiercest of Fridays.