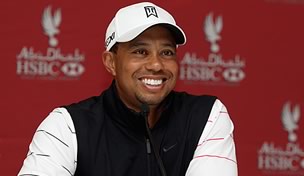 ABU DHABI, United Arab Emirates – “I started from the green back.”

That’s the way it works when you’re rebuilding, from the green back, from the ground up, from this point forward.

Tiger Woods was talking about his seven-week off-season and how he prepared for 2012 and this week’s Abu Dhabi HSBC Golf Championship – two weeks on hiatus and then onward and upward. From the green back.

For those who take the long view, Woods’ assessment is part metaphor, part method. From the competitive and emotional depths of 2010 Woods has rebuilt, some may even say reinvented, seemingly every part of the product.

Critics will say it was a fat appearance fee that lured Woods to this Middle Eastern playground. Perhaps but even in a down economy there is something to be said for the cathartic benefits of a fresh start.

“My first time in Abu Dhabi,” Woods smiled on Tuesday. “I hear nothing but positive things of the golf course.”

The same could not be said of Woods’ first news conference of 2012. The 30-minute Q&A was dotted with six questions regarding Hank Haney’s new book “The Big Miss,” which is due out the week before the Masters.

Woods reiterated his disappointment in what he views as a violation of trust, although it must be pointed out that Haney seems to be one of the few members of Team Tiger that was never asked to sign a nondisclosure agreement, and, in a telling exchange, offered a rare glimpse into how stardom complicates relationships.

Woods was asked if it was difficult, given his comments about Haney’s book and his unsavory split with caddie Steve Williams, to trust people who are close to him. “One might say that,” Woods allowed.

One might also say that despite the distractions, or maybe because of them, Woods begins his 16th year as a professional with more optimism than he has exhibited in some time, the byproduct of improved health and a better understanding of what Foley wants him to do.

It’s also the first time in two seasons he has a bit of history on his side following his victory at the Chevron World Challenge in December and solid showings at the Australian Open and Presidents Cup.

“I missed most of the year (2011), and to finally be able to get ready for a tournament properly and to do the type of lifting that I think I need to do to be ready, I was finally able to do that and my game came around,” Woods said.

Left unsaid was a competitive psyche that also reset in a familiar way at Sherwood Country Club. Before the Chevron some wondered if Woods needed to learn how to win again. Birdies at Nos. 17 and 18 to clip Zach Johnson by a stroke proved it was still familiar curriculum despite a two-year victory drought.

“I know how to get it done,” Woods said on Tuesday. “I’ve been there before and it shouldn’t feel any different. They asked the same question of Jack (Nicklaus) in ’86 (at the Masters). Did if feel any different out there? It didn’t.”

Maybe the most telling sign of how far Woods has come will arrive on Thursday when he tees off with world No. 1 Luke Donald and Rory McIlroy in Abu Dhabi. Last year at the Dubai Desert Classic, Woods’ one-dimensional swing was blown off course by a fierce Sunday storm, he signed for a 75 and tied for 20th.

“I got exposed again because the wind was right to left and I couldn't cut the golf ball into it,” Woods said in December.

Just past noon on Tuesday Woods carved a drive into a similar right-to-left gale and smiled faintly as his golf ball bounded safely along the first fairway.

From the green back, from the bottom up, from this point forward, that’s how Woods began his climb back from the abyss that was 2010 and why it’s taken longer than many thought it would to turn the tide. And why he’s starting to sound like a man who knows where he and his golf ball are going.