World of possibilities awaits Woods and co. Sunday at Doral 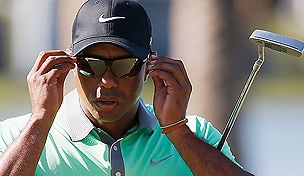 Getty Images
Arnold Palmer was a three-time winner on Tour when he teed off in the 1957 Houston Open, but Doug Ford was the bigger star. In 1955 Ford had won the PGA Championship, been named PGA Player of the Year and made the first of his four Ryder Cup appearances. Palmer, however, shot 9-under 279 to nip Ford by one stroke. Ford was hardly deterred, though. He went on to capture the 1957 Masters, and a year later, as defending champion, he helped 1958 champ Palmer put on his first green jacket (pictured).  -

From the cruelty of Friday’s gale to the rare south Florida calm that greeted players for Saturday’s third turn around the Gil Hanse redesign at Doral, the tale of two days was etched across many faces as Round 3 yielded three times as many scores in the red compared to Friday.

“Last night I felt beat, the guys felt beat up. There were a lot of guys downstairs (at the hotel) last night having a beer,” smiled Jimmy Walker, who was 10 strokes better on Saturday (67) than he was on Friday (77) on his way to a tie for ninth.

What awaits for Sunday’s final lap could go either way, although the field would gladly take another breezy walk around the brand new and beefy Blue Monster. Tiger Woods certainly would.

The world No. 1 carded a stress-free 66 and appears poised to complete his first PGA Tour Sunday round of the year. Of course, that’s if his ailing back, which prompted him to withdraw from last week’s Honda Classic, cooperates.

When Woods walked off the course he was one stroke off the lead thanks to a Saturday surge and will begin Round 4 three strokes behind Patrick Reed in his quest to win his second consecutive WGC-Cadillac Championship.

Strangely, if Woods goes on to win his fifth PGA Tour title at Doral – two World Golf Championships and two Ford Championships – it may be Friday’s 73, a round that included three water balls, and not his Saturday rally that lifts him to the winner’s circle.

“It was nice to get back in the tournament again,” said Woods, who is tied for fourth at 1 under. “I held it together yesterday, a long day, a long, tough day and that gave me a chance today. I figured if I just get back to even par for the tournament I’ll be right there and I did one better.”

Count Woods among the large group that hopes we’ve seen the last of the various faces of the new Doral. When asked to characterize the rebuilt Blue Monster many figured the only comparison would be to a major championship venue, but even that doesn’t exactly fit the mold.

“I can't remember the conditions changing so much, where the wind was blowing 20, 30 (mph) and then you get an absolute perfect day like we had today,” said Jason Dufner, who is tied for second place with Hunter Mahan at 2 under. “Usually when it's firm and fast and tough, you expect it for the whole week.”

And Hanse’s handiwork has provided a major-like leaderboard, complete with names like Woods, Johnson (both Zach and Dustin are tied for sixth at even par), Dufner, Mahan and Reed . . . that would be Patrick Reed.

If Reed’s name doesn’t exactly fit the star billing one would expect from a World Golf Championship consider that the soon-to-be father and former Monday miracle worker has won twice in his last 13 Tour starts, hasn’t missed a cut since the Frys.com Open in October and is currently 13th on the U.S. Ryder Cup points  list.

If U.S. Ryder Cup captain Tom Watson is unfamiliar with the second-year Tour player he should start getting to know the 23-year-old. Reed carded a third-round 69 to move to 4 under par, two shots clear of Mahan and Dufner, and he is already 2-for-3 in his young career turning 54-hole leads into trophies.

But then those previous two victories - the 2013 Wyndham Championship and 2014 Humana Challenge - didn’t come against the world’s best, and on Sunday the weight of the game’s entire marquee will be bearing down on him.

“To me it’s another golf tournament. Of course, it’s a World Golf Championship event and there’s a lot on the line, but at the same time I have to treat every round, every event like it’s just a normal event and a normal round of golf,” said Reed, whose wife, Justine, is due with the couple’s first child, a girl, on May 26.

Sunday, however, promises to be a new test for Reed. If, as many players have said this week, Doral is playing to major championship standards, then Reed, who has never played a Grand Slam event, will likely be faced with an entirely new set of challenges.

Just ask Dufner, who has won a major and is treating this week no differently. “It’s a tough course, man,” he figured. “Head down, on to the next hole.”

He’s just hoping that next round is more like the one he enjoyed on Saturday and not that Round 2 tempest.