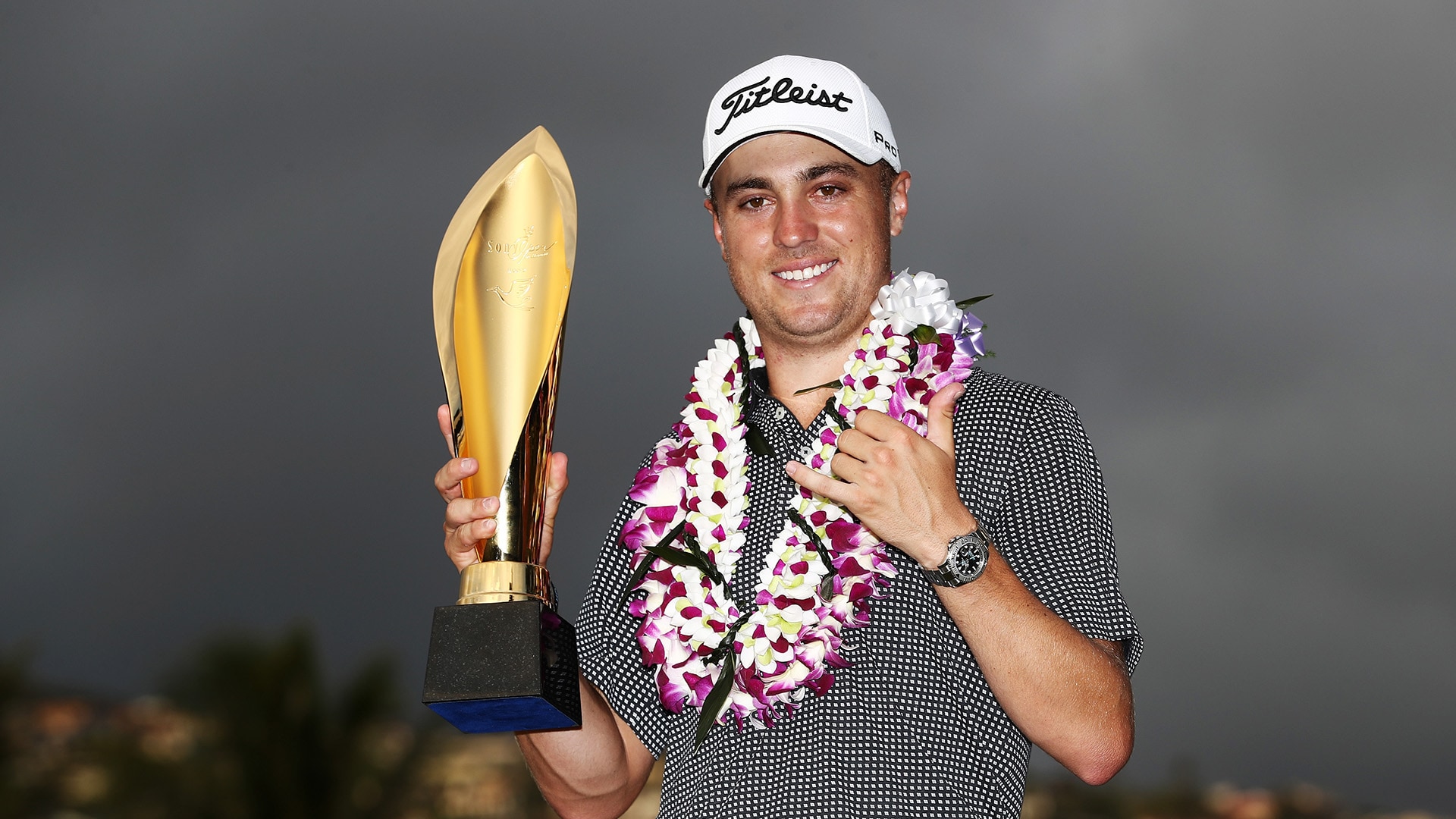 HONOLULU – If this began as the worst week of Justin Thomas’ life, just imagine what a good week would look like.

To be completely accurate, following Alabama’s loss in Monday’s national championship game Thomas tweeted, “Without a doubt most upset I've ever been in my life. Just hate to see those guys lose that game after a great season. Congrats to Clemson.”

That he was less than 24 hours removed from his third PGA Tour victory, a three-stroke gem at the SBS Tournament of Champions, was reason to dismiss Thomas’ musings as a heat-of-the-moment lapse. That he was less than seven days away from his second consecutive appointment with a victory lei only served to highlight the emotional ebb and flow of his fortnight in Hawaii.

Even after he opened with an 11-under 59 to become just the seventh player in PGA Tour history to post a sub-60 round, the Crimson Tide’s loss lingered.

“We talked about it all week,” said Trey Mullinax, Thomas’ roommate for the week on Oahu and a former teammate at Alabama. “It wasn’t until solid Wednesday, both of us had a hard time with that. Deep down it was about Wednesday until he was fully over it.”

In fact, it was probably all the way to the starting bell on Thursday before Thomas’ mind was able to wrest free from the heavy thoughts of Alabama’s loss.

But they faded quickly.

He chipped in for eagle from 34 yards at his first hole of the week (No. 10), rolled in a bookend 15-footer for eagle to complete his historic opening round and never looked back.

For the week, Thomas matched the first-round 18-hole Tour scoring record (Paul Goydos is the only other player to begin a tournament with a 59), broke the 36-hole record (123), tied the 54-hole mark (188) and closed his week with a birdie at the 18th for a final-round 65 and 27-under 253 total, which eclipsed the circuit’s 72-hole standard.

But it was another footnote in history that Thomas spent the better part of Sunday morning mulling. Told on the eve of the final round that no player had ever lost a lead of seven or more strokes the noise became deafening.

“I was more nervous teeing off today then I was in the other [wins],” said Thomas, who won for the third time in his last four Tour starts and his fourth big league tilt. “I had to turn off Twitter, I couldn't look anymore. It was just like, no one has ever lost a seven-shot lead, no one has ever lost a seven-shot lead. I'm like, I go out and play OK, a bad break here and there, if someone shoots 9 under, I lose.”

Thomas said he planned to play the final round with a “smart aggressive” approach, and his first nine holes, a bogey, two birdies and six pars, certainly qualified.

With his lead trimmed to five strokes, however, Thomas delivered with a grit that even Mason Crosby, the Green Bay kicker who deep sixed the Dallas Cowboys just as the leaders were making the turn in Hawaii, would be proud of.

He birdied the 11th hole to go six ahead, added another at No. 12 to jump eight clear and when he birdied the 14th hole he took a staggering nine-shot advantage. By the time he made his way up the 18th fairway it wasn’t the field that Thomas was thinking about, it was the 72-hole record.

“I was telling [caddie Michael Greller] out there, honestly it felt like we were playing a different tournament. I honestly felt like I was trying to win the tournament for second place,” smiled Jordan Spieth, who closed with a 63 to finish alone in third place. “JT is just pretty unbelievable what he's doing right now. He's got full control of his game, full confidence, and he's executing under pressure.”

In a twist to the duo’s friendship, a creative jokester turned the sign around marking Spieth’s parking spot at Kapalua last week and scribbled “Golden Child,” which is Spieth’s nickname on Tour. Some believe the most likely culprit was Thomas, although he hasn’t taken credit for the gag.

After playing eight rounds in Hawaii in 49 under to become the first player to claim the Aloha Slam since Ernie Els in 2003, it is now Thomas whose turning everything he touches to gold.

Like the other members of the high school class of 2011, a growing list that includes Spieth and Daniel Berger, Thomas has never wanted for confidence. He always knew he was capable of this kind of golf, vividly envisioned joining Spieth and the other members of the game’s elite atop the marquee, but until he beat Hideki Matsuyama, arguably the hottest player in the world at the time, at last fall’s CIMB Classic he was somewhat lost in the mix of up-and-coming players.

“I've always felt like I had the game to do so,” said Thomas, who moved to eighth in the world. “You can't expect wins or you can't be like, look, I'm going into this event and I should win this. It's more of just like, I'm playing well enough, if I manage everything well and I'm smart out there, I should have a chance to win.”

Both Thomas’ caddie Jimmy Johnson and his father, Mike, have seen the transition over the last few months from anxious prodigy to a player at ease with the spotlight and pressure that comes with winning.

“His confidence is crazy, he’s more comfortable in that situation now and his patience level is much better,” Mike Thomas said. “He expected to win before, but that’s easy to say when you haven’t won, but once you start winning it gets easier.”

As he celebrated with the Waialae members late into a balmy January night, that gutting loss in the national championship game seemed a lifetime away; but it turns out Clemson’s upset wasn’t the only lowlight of Thomas’ week. Each night he and Mullinax would pass the time playing gin.

So, it turns out there was room for improvement.