Diplomacy with a Democrat 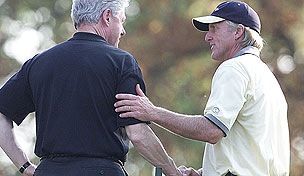 Greg Norman still fits comfortably into the Hugo Boss Stovepipe jeans he bought more than 30 years ago. At age 56, Norman sports the same 32-inch waist. When he revealed this during a recent Golf Channel Academy taping at his Medalist Golf Club in Jupiter, Fla., I thought, 'This is the point in the show where wives turn to their husbands, pat their bellies and say, ‘I still love you honey.’'

When Norman tees it up this week at the Humana Challenge, fans will likely remark, as they often do, that he looks the same as he did when he first arrived in the U.S. It was 1976, in the California desert at Mission Hills. Greg teamed with Bob Shearer to play the World Cup.

He fondly recalled his first, first-class flight on Pan Am from Sydney to Los Angeles. From Palm Springs he traveled north to Carmel to play Pebble Beach and Spyglass for the first time. He hung out at Sadie’s, a local watering hole in Carmel and later went to Pasadena to see the Raiders beat the Vikings in the Super Bowl. That’s a strong introductory to the United States.

Norman always knew how to mix a good time with hard work. “I estimate that I’ve hit between 800 and a 1,000 balls a day in my prime so I’m guessing it’s about 4 1/2 million balls that I’ve hit in my lifetime,” he said.

They were hit with purpose. “When I practiced at Royal Queensland Golf Club, growing up there was a tree right in the middle of the driving range,” he said. “And I used to practice trimming up the branches and that taught me ball flight. It was my way of having fun, avoiding boredom.”

As an assistant pro at Royal Queensland, Norman also learned how to make a driver out of a block of wood, to mill a laminated piece of wood, put on the face and sole plates, insert the shaft in and then whip it all up. The knowledge proved useful. “About every month I’d have to repair my driver,” he explained. “I’ll never forget when I went to Palm Springs in ’76 to play that World Cup, my club head speed was measured at 128. So my persimmon driver was getting a pounding, always falling apart.”

Jeff Sluman, in the grill room at Medalist days before he’d leave to start his Champions Tour season in Hawaii, said of Norman, “He’s the greatest driver of the ball with a wooden club ever.”

This week, while his contemporaries will be in Hawaii, Norman will rekindle the good memories of that first trip to Palm Springs 35 years ago when he wielded that old persimmon MacGregor M-83.

Still a box-office draw in the titanium era, Norman answered the call to play in La Quinta from President Bill Clinton, the maestro of the second act now spearheading one for the Humana Challenge, formerly the Bob Hope Classic.

Norman and the former President forged a lasting though unlikely friendship during Mr. Clinton’s first term in the 1990s.

“I received a call from the White House saying the President is going to be in Australia,” he said. “Would you be interested in playing golf with him? This is where I learned a huge lesson in life, that you never pre-judge someone from what they say or your views of what that person represents.”

Norman concedes he did not like the Democratic direction. “I’m a Republican through and through and believe in free market enterprise. So I called up President Bush (41) and I said, ‘Mr. President, I’ve been asked by the White House  to play with President Clinton. To be honest, I don’t like his political standing.’ And President Bush said, ‘Greg, I’m going to give you one piece of advice. You respect the office of the President of the United States. If he asked you to play you go play golf.’”

Norman heeded the advice and set up a round at his favorite course in Australia, New South Wales. “All of a sudden my guard’s down,” he recounted. “And this conversation on life opened up and all of a sudden I see the President of the United States as I would you and I sitting down and talking. And I said, ‘Greg, don’t ever again pre-judge.’”

“I truly believe this tournament will be resurrected because of his passion for the game. You don’t find many people like him in the world.” Norman and President Clinton are expected to be paired together this Saturday.

After the Humana Challenge, Norman will head to Rio for his January 31st presentation to the Olympic Committee. He’s one of eight design finalists, saying that “whoever gets the nod will do a great job with the routing.”

“Of course, if you win the bid it’s not just winning the bid to build and design the golf course. You’re actually carrying the baton for the game of golf for years because golf is only in for 2016. It’s not yet guaranteed for 2020. So there’s great responsibility, whichever designer is chosen. You’re not just an architect, you’re an ambassador.”

Norman’s ready to take his swing, full bore, as he’s always done, the waistline and the ambition unchanged.