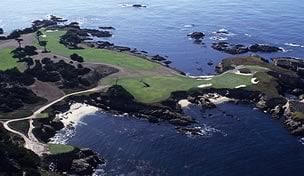 Getty Images
Sergio Garcia of Spain plays his shot plays his shot from the 16th tee during a playoff during the final round of THE PLAYERS Championship at the TPC Sawgrass Stadium course on May 10, 2015 in Ponte Vedra Beach, Florida. (Photo by Mike Ehrmann/Getty Images)  -

PEBBLE BEACH, Calif. - Legends abound on the Monterey Peninsula. From Pebble to Cypress to tales of old, here are some some Hooks & Cuts hovering around the Pacific.

• John Daly is paired with Kid Rock this week.  Rock’s put out a few songs that fit JD to a tee: “Rebel Soul,” “Devil Without a Cause,” and “Wasting Time.”

• If the weather gets nasty, I like Aaron Rogers and Tom Brady over Peyton Manning.

• Old shtick never gets old if it’s good shtick.  This is good and old: Jack Lemmon putting for 10 on the final hole asks his caddie which way the putt breaks and the looper says, “Who cares?”

• You know you’re playing at a really cool spot when the caddie says to you, “This was Hogan’s favorite shot on the golf course.”  The course was Cypress Point and the shot was the second to 12, a 6-iron from 155 with the Pacific wind pushing back.

• Promising young pro Justin Thomas had a nice Wednesday.  His Alabama Crimson Tide landed the No. 1 recruiting class in college football, and he played Pebble for the first time in his life.

• Davis Love III, asked to name a couple of celebrities with swing action he liked through the years, gave me Orel Hershiser and Indy racer Danny Sullivan.

• Jim Furyk loves football and described the Denver Broncos’ super bust this way: “To have such a great year end this way is like leading the Masters for 71 holes only to lose on the last. It’s an empty feeling.”

• David Gill, a 3-handicap member at Tehema near Pebble, won the pro-am with Skip Kendall in 2000.  Asked to describe the accomplishment, he said, “It’s the holy grail.” Does he remember any specific shots?  “I hit my second shot on No. 8 to 9 feet and made birdie.” You never forget that stuff, do you?

• Playing partner Joe Don Rooney of the band Rascal Flats is writing a new song about my experience at Cypress’ fabled par-3 16th, 238 yards over the ocean (pictured above). It’s called, “I’m not man enough.”  I wrecked a nice round with two snipes that are washing up in Tahiti right about now.

• Furyk’s fondness for Pebble goes beyond the golf.  He and Tabitha were engaged in Carmel in 2000.

• A bogey at Pebble’s tiny seventh takes some of your soul. It robs you of your manhood.  But the focus shouldn’t be the score.  At No. 7, it’s just you and the Lord and the game you’re blessed to play.

• Desimone’s seen a lot in his 35 years at Cal. He said it was plain to see 20 years ago that Tiger and Phil Mickelson, as collegians, were both lead-pipe cinches for all-time greatness.  I asked him if he’s had that feeling about any recent players. “(Jordan) Spieth has superstar written all over him,” he responded. “He’s long, he putts and he’s fearless.”

• Lost in conversation walking off the 17th, I looked up as we arrived at the 18th tee at Pebble. My knees just about buckled.

• From one of Pebble’s owners, Dick Ferris: “People ask me what it’s like to own Pebble and I always tell them that we’re just stewards of a national treasure.”

• Beyond Spieth, Desimone pointed to Alabama’s Cory Whitsitt, Justin Thomas and Bobby Wyatt as “can’t-miss kids,” along with Patrick Rodgers of Stanford.  And naturally he’s high on his own charges: Michael Weaver, Max Homa, Michael Kim and Brandon Hagy.

• Stories come at you like Pacific waves this week.  The artist and historian Jim Fitzpatrick related a good one. The late Ken Venturi caddied at Cypress as a kid, sitting on the bench behind 16 tee at day’s end waiting for his pop to pick him up after he’d sold netting to the fishermen down at Monterey’s wharf. The old-time bag men took care of the kid, fed him fried chicken. Kenny always vowed that someday he’d win the U.S. Open and then return to treat the caddies. Sure enough, after the courageous victory at Congressional, Kenny showed up one day and popped open the trunk of his Cadillac. Inside was Kentucky Fried Chicken and champagne. Kenny and the caddies celebrated.

• Heady Joe Ogilvie says Pebble’s 14th is the hardest par 5 in golf, that if you played just the 14th 72 times in a stroke-play event, into a 10-mile-per-hour wind, the winning score would be 10 over.

• Desimone reminisced about Cypress’ beloved pro Jim Langley, who passed away last year at 75.  Langley not only played golf at Cal, but basketball as well. He was part of the 1959 team that beat Oscar Robertson and Cincinnati in the semis and then Jerry West and West Virginia in the final on the way to winning the NCAA title.

• The celebrity field is not light on legends with Wayne Gretzky, Brady and Manning at the top of the list. But the best of them all may well be surfing giant Kelly Slater. The 11-time world champion flew to Pebble late Wednesday after earlier that day winning the Volcom Pipe Pro in Hawaii at almost 42 years of age. Slater’s also a 3-handicap.

• Geoff Ogilvy, as reasonable and thoughtful as any Tour pro I know, said he felt like some of the fans in Scottsdale were getting a little too rambunctious, at times even a bit ugly. He thinks the tenor’s changed in the last couple of years, and not for the better.

• Eighty-five years ago on the Monterey Peninsula, a talented woman and a Nebraska caddie unknowingly had a hand in the creation of Augusta National. The woman was Marion Hollins, the 1921 U.S. Women's Amateur champion who brought in Alister MacKenzie to design Cypress Point and Pasatiempo, two courses she helped to develop. The caddie was Johnny Goodman, who upset Bobby Jones in the first round of the 1929 U.S. Amateur at Pebble Beach. With time on his hands after his defeat, Jones explored the other golfing treasures on the peninsula and was subsequently introduced to MacKenzie by Hollins. Impressed with what he saw, Jones hired MacKenzie. The rest is history.