Hooks & Cuts: Ballin' at the Sony 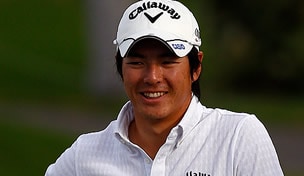 HONOLULU – After island hopping from Maui to Oahu for this week’s Sony Open, here are a few Hook & Cuts, including a little basketball fun.

• Zach Johnson’s the “Together Man.” He’s got it together physically, tactically and spiritually.

• During the FedEx Cup Playoffs late last season I asked Jordan Spieth to explain his success. He said, “I try to play a veteran’s game.” That means he plays to the correct side of a fairway to better access the hole location, doesn’t fire at every flag and tries not to short-side himself. That means Spieth thinks clearly.

• The Tour’s resident humorist, Paul Goydos, returning to action after a year and half away to repair his left hand, took note of all the strapping young talent milling about at the Sony Open: “They all look like 20-year-old middle linebackers.”

• Remember Ryo Ishikawa? He’s been forgotten as countryman Hideki Matsuyama’s soared. They’re good friends, and yes, Ishikawa says that Hideki’s success has motivated him. “It gives me energy,” he said. “He’s a huge talent.” Ishikawa’s healthy after being hampered by back issues early last year – able now to practice more rigorously – and he did show promise late last season with a strong performance in Las Vegas.  Ishikawa played the Presidents Cup when he was 18, and played well. Now 22, he joked, “I’m getting old.”

• Roger Cleveland has built and sold his share of wedges and he’s noticed, as many of us have, a marked improvement in short-game artistry across the Tour. “Wedges are getting better and so is technique,” he said.  Pat Perez, working with Cleveland, added, “Just about everyone out here can hit it. Your short game HAS to be better.”

• Sean O’Hair tuned up for the Sony Open after a four-day match against three scratch-handicap buddies at PGA West in La Quinta. It was their best ball of three against him. The pro won. The pros are good.

• John Daly knows a little basketball. On his golf bag, he displays the logos of his favorite teams – University of Arkansas, Dallas Cowboys, St. Louis Cardinals and Boston Celtics. I asked him for his favorite Celts and he said, “Tough to beat Bird, Parrish and McHale.” I replied that I loved how Kevin McHale used to hold the ball above his head, survey the floor and then turn, shoot and score. Daly noted, “That’s because his arms were longer than his legs.”

• Guan Tianlang, engaging and speaking good English, told me he’s added 10 yards to his tee ball since the Masters. He’s done some training at the Titleist Performance Institute in California and has added eight pounds to his frame. At this point, his plan is to go to Florida, where he’ll work with Sean Foley. He didn’t rule out the possibility of going to high school in the United States.

• Andrew Loupe, a long hitter out of LSU, echoed the prevailing rookie sentiment as they continue their PGA Tour journeys this week at Wailae Country Club. “This is something I worked for since I was a kid,” he said. “I used to say, ‘This chip to win the Masters.’” It’s a big moment for his family, too. “My dad always took me to the course, starting when I was 3 years old.”

• Jordan’s not the only athletic Spieth. His brother Steven’s a starting freshman guard at Brown University, averaging a respectable six points, five rebounds and three assists per game.

• Guan spoke effusively about the lengthy conversation he shared with Jack Nicklaus at the Memorial last spring. “He told me that golf shouldn’t be the only focus in my life,” said Guan. “He said it’s important to have friends, to enjoy other sports and do other things.”

• When I watch Johnson, I’m reminded of the legendary former Princeton basketball coach, Pete Carill, who used to back-door bigger and faster opponents to death. He wrote a book that perfectly applies to Zach. It’s entitled, “The Smart Take From the Strong.”

• As long as we’re weaving a basketball thread, I recently shot a story with one of the NBA’s 50 greatest players, Rick Barry. It will air on “In Play with Jimmy Roberts” in the near future. Barry’s almost 70 and a Masters Division long-drive champion, regularly belting 340-yard drives. What’s his NBA all-time starting five?  Wilt, Russell, Magic, Michael and Rick. That’s right. LeBron comes off the bench and spells Rick Barry at small forward. The best give no quarter. And Barry was one of the best, averaging 40 before the three-point line in the 1967 finals against Wilt Chamberlain and that great 76er team.