Hooks & Cuts: The girl and Garcia 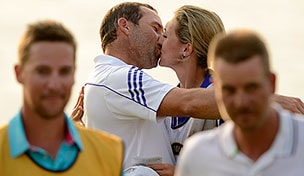 Getty Images
Images from Grill Room's day around the town at the 2014 PGA Championship in Louisville, Kentucky.  -

PALM BEACH GARDENS, Fla. – We’re in sunny Florida. Well, it’s a bit overcast and wet at the moment. Still, here are some Hooks & Cuts to brighten your day.

• Tiger owns the burning, peeling bullet fade. From now until Augusta, it’s a good bet he’ll work to hone a reliable right-to-left shot that’s so important yet has eluded him in recent years at the Masters.

• Last year’s Honda walk-off in a fit of immaturity could end up being the best thing that ever happened to Rory McIlroy. He learned the power of his actions, realizing that’s not the man he wants to be. Since then, he’s shown humility and respect for the game. They go hand-in-hand. He owned his mistake, took the heat and went to work.

• Gonzalo Fernandez-Castaño has known Sergio Garcia for more than 20 years, since they were boys growing up in Spain. “I was talking to my wife,” he said.  “And I said, ‘I think this is going to be Sergio’s breakthrough year.’ He’s happy, he’s enjoying life again and he’s enjoying golf again.” The principal reason, as Gonzalo sees it, is Sergio’s girlfriend, Katharina Boehm, from Germany. “She speaks her mind,” Gonzalo said with a laugh. “She’s not afraid to tell Sergio to behave! Hopefully she’s the one. They make a fantastic couple.”

• Everywhere I go people want to know, “Is Victor playing this week?” He’s not.  Tiger, Phil and Rory will have to pick up the slack in Dubuisson’s absence.

• Billy Horschel on PGA National: “You can’t fake it around here.”

• Granted, this has not been the standard Tiger start to a season, but let’s see where we are in two weeks before drawing any conclusions.

• The mighty Thor, 24-year-old Thorbjorn Olesen from Denmark, looks like an Olympic gymnast. Hard at work on his short game at PGA National, he stopped to chat about the rise of a new class of young European talents lead by Dubuisson.  “Keep an eye on Lucas Bjerregaard,” he told me. “He’s a big dude, long off the tee and really good.” Bjerregaard’s a 22-year-old, 6’3” Dane who won the European Amateur Championship in 2010, a year after Dubuisson won it.

• Fernandez-Castaño on Sergio’s ability: “I’ve played with Tiger, Phil, Ernie, Vijay and just about all the recent greats, and the two most talented guys I’ve ever seen are Tiger and Sergio, by a mile.”

• Rookie Hudson Swafford and his good pal Harris English look like brothers. “We play that card a lot,” Swafford joked. Like English, Swafford’s 6’3” and a University of Georgia product with a degree in consumer economics. Like English, he’s immensely talented.

• Only when he turns around does it hit you just how serious Tiger’s been about weight lifting. His back and shoulders are hulk-like.

*Sean O’Hair is back with Sean Foley. O’Hair enjoyed his best year under Foley in 2009, with a win and nine top-10s.

• According to Honda tournament director Ed McEnroe, attendance this year could reach 200,000 for the week. In 2006, the last year at Mirasol, it was 56,000. No event on Tour has revived its fortunes as dramatically as the Honda Classic.

• Outright dominance and invincibility are no longer Tiger’s, and yes  he now occasionally wrestles with self-doubt, like any golfer, but he did win five times last year. That’s as many as Tom Lehman won for his career; as many as Luke Donald and Bubba Watson.

• Fernandez-Castaño on Dubuisson: “He doesn’t give too much importance to what he’s doing. It’s hit it, find it, and hit it again. He’s a fantastic player.”

• Saw a clip of a Golf Channel documentary on Arnold Palmer, airing over three nights beginning Sunday evening after the final round of the Masters. Arnold’s the ultimate alpha male but an alpha you feel comfortable around. Most alphas give off a vibe that makes it hard for ordinary people to be in their company. Not Arnold. Not ever.