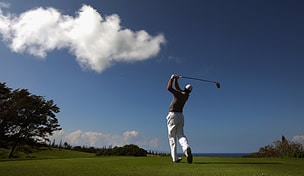 KAPALUA, Hawaii – Let’s get the new year off to a great start with some Hooks & Cuts on the island of Maui:

• They start this week: the Hyundai Tournament of Champions ... and the new diet.

• The guys on Tour call him Harry. Harris English sounds like an aristocrat. Harry’s a cop, ambling like Clint Eastwood in his early movies – quiet, with purpose, and when needed, force.

• He’s not as physically gifted at 20 as Tiger was – or Sergio or Rory or Adam Scott – but Jordan Spieth’s more “grown up” than they were.

• After a recent solid round, I announced to anyone who would listen that I’d found it – it being the ability to stripe it, cover it and move it. None of which I can really do, but it sounds so good to say it. The next time I played, here’s what I found: my ball in a bush, out of bounds, and in a lake. The golf gods punish those with hubris.

• Happy and ruthless is an excellent combination in professional golf. Matt Kuchar’s proof.

• I frequently get tips on the set of “Live From.” The two best this past year came from John Cook and Peter Jacobsen. Cook told me to swing hard left and gave me a good drill, dropping the right foot back to promote an over-the-top feeling. I’m a chronic hang-back swinger who gets underneath and flips.  Jake told me to go low-to-low on chip shots rather than picking up the club so quickly, reducing the chunk factor.

• Remember, though, I’ve found nothing.

• Don’t forget, Tiger’s three Tour wins from tying Sam Snead. That will be a giant moment when he owns the all-time wins record outright, a time to reflect on the gaudy achievements. Fred Couples made the Hall of Fame by winning 2 percent of his career Tour starts. Tiger’s winning at a near 26 percent clip.

• I still can’t swing the Medicus. That bothers me.

• They won under the radar late in 2013 and far from America: Rory in Australia, Luke in Japan and Sergio in Thailand.

• There are four players capable of winning multiple majors in 2014: Woods, Scott, Mickelson and Henrik Stenson.

• I’m troubled by the fact that some days I look at my phone more than my kids.

• We march on in 2014 without a Golf Channel family member who passed away late last year. Danny Siegel, known as Dan-O, was a crack camera operator and a real character. Sometimes, he’d grab the microphone at a local bar and belt out an excellent Sinatra. He did a spot-on Rodney Dangerfield; though, Dan-O got plenty of respect. He was that rare bird in a too serious world. The moment you saw him you knew the next two minutes of your life were going to be funny. Life on Tour won’t be quite as good without those minutes, without Dan-O. 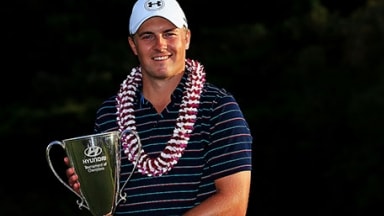 In this week’s episode of the Monday Scramble, we discuss Jordan Spieth’s win at Kapalua, the comparisons with Tiger Woods, Justin Thomas’ Ryder Cup remarks and more: 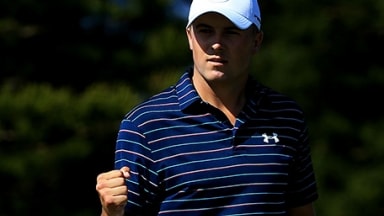 The first tournament of the new year belonged to Jordan Spieth, as the world No. 1 cruised to an eight-shot victory at the Hyundai Tournament of Champions. 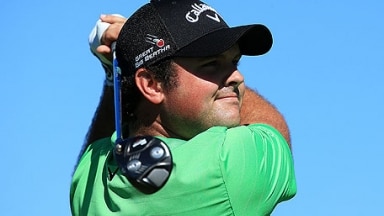 Patrick Reed went birdie-eagle to close his opening round of the Hyundai Tournament of Champions, and the defending champ leads Jordan Spieth by a shot after one round.