Ode to Nicklaus as the Golden Bear turns 75 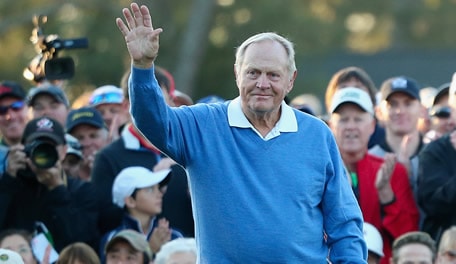 For almost 40 years he was a threat to win majors – 40 years! Even at 58, when he had an outside chance heading to the second nine on Sunday at the 1998 Masters, you thought, “Hey, it’s Jack. Maybe, just maybe.”

Maybe. Yes, sir! Go ahead and play Verne Lunquist’s 1986 call a hundred times and you get goose bumps on every one.

In any sport, what’s better than clutch, to get it done when you absolutely have to?  That’s Jack, clutch until the day he walked away.

At Pebble in 2000, in his U.S. Open farewell at age 60, he belted his second shot onto the par-5 18th in two, just as a reminder of who he was. He three-putted through tears.

At St. Andrews in 2005, in his Open Championship goodbye, he had one last birdie putt on the final hole. It was Friday. He would not make the cut. Has a Friday putt ever meant more than that one? And was there ever a doubt? He made it, because it mattered.

When he was young, he was so powerful. He was sensible, too. I also loved the Nicklaus crouch over a critical putt. Jack took his time. He was deliberate, and I didn’t mind because he was building to something important. And he was so reliable.

He didn’t win them all, though, did he? He finished runner-up in 19 majors. And if you didn’t know a thing about golf and someone asked you to look at a photo of Jack congratulating Tom Watson at Turnberry in 1977 and to pick out the winner, you might say Jack, as happy as he looked.

Jack Nicklaus always elevated this game in ways that have nothing to do with the record numbers he put up.