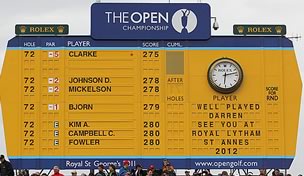 – Rickie Fowler outplayed and out-spirited Rory McIlroy and for the first time I thought maybe the gap between the two is not Grand Canyon-wide.

– Phil Mickelson was on his way to one of the greatest rounds in golf history. Seriously. He was 6 under through 10 in rough weather Sunday at a major. He’d wiped out a five-shot lead. And then, with one jack-hammered 2-footer at 11 it wasn’t one of the greatest rounds ever. But it was fun while it lasted, just like the ’09 Masters when he went nuts on the first nine before rinsing it at Rae’s Creek.

– If Sergio Garcia gripes about a lack of passion for the foul weather game, he gets ripped for being a whiner. Rory got a pass because eight-shot wins at a U.S. Open and a generally sunny personality buy you a pass.

– Tom Watson has become Shivas Irons, an almost mystical figure. And that’s what makes links golf so unbelievably cool. When it’s firm, 61-year-old guys aren’t at a huge disadvantage in terms of length. When it howls and spits, it becomes a test of reading wind, a test of maintaining rhythm and a test of attitude. Watson is peerless in those categories.

– A decade ago, Clarke was one of the few not just comfortable in Tiger’s imperious presence of 2000, but confident enough to kick Tiger around. And for that Tiger respected Darren. It’s no surprise that Tiger texted Darren his best wishes Saturday night.

– Rory may be the king in waiting. Clarke looks more like the Godfather.

– Who knew Miguel Angel Jimenez was Richard Pryor with a ponytail and a pitching wedge? In the parlance of the comedy world, his shtick killed all week.

– Look for Clarke to captain Europe at the 2016 Ryder Cup in the U.S. Fans here will have a hard time rooting against a team lead by Clarke, and that helps when you’re trying to win on foreign soil. Don’t be surprised to see either Thomas Bjorn or Paul McGinley get the nod in 2014 at Gleneagles in Scotland.

– Northern Ireland’s turning out major champions like the Dominican Republic turns out shortstops.

– One thing you want heading into a final round at a major is absolute confidence in your short putting early. Clarke grabbed it at the very first hole with that downhill, right-breaking putt that he absolutely throated for par. That set the tone and he was rock solid the rest of the way.

– There was so much Sunday that was vintage Phil, from the sublime start to the inexplicable yet semi-predictable miss at 11, to his discussion of Pelzian (Dave Pelz), mathematical theory on the fifth tee.

– Clarke was very good, but he was also very lucky at nine when his second shot skipped over those double-bogey death traps disguised as pot bunkers. You knew then it was his day.

– Colleague Brandel Chamblee unfurled this description of Dustin Johnson’s second shot at 14, “There’s Kent to the left and can’t to the right, as in can’t hit it there.”

– How about Clarke as a lead television analyst someday?

– I find Tom Watson’s commentary helpful. One of these years ESPN will get four days out of him, but it might not be until he’s 70. He’s 61 and swings like he’s 21.

– Clarke’s win is a case of a guy getting his just due, a good talent with a good nature.

– Graeme McDowell won the U.S. Open after having left agent Chubby Chandler so there were whispers that maybe Chubby somehow held guys back, the inference being that if you wanted to have a good time then go hang with loveable Chubby but if you wanted to win majors think again. Then along came Louis Oosthuizen, Charl Schwartzel, Rory and now Darren, Chubby’s first client going back 20 years. Just like that, it’s Chubby’s world and plenty of people will want in. And a good world it is.

– David Feherty announced he’s coming out of retirement for the PGA Championship in hopes of becoming the third straight major winner from Northern Ireland.