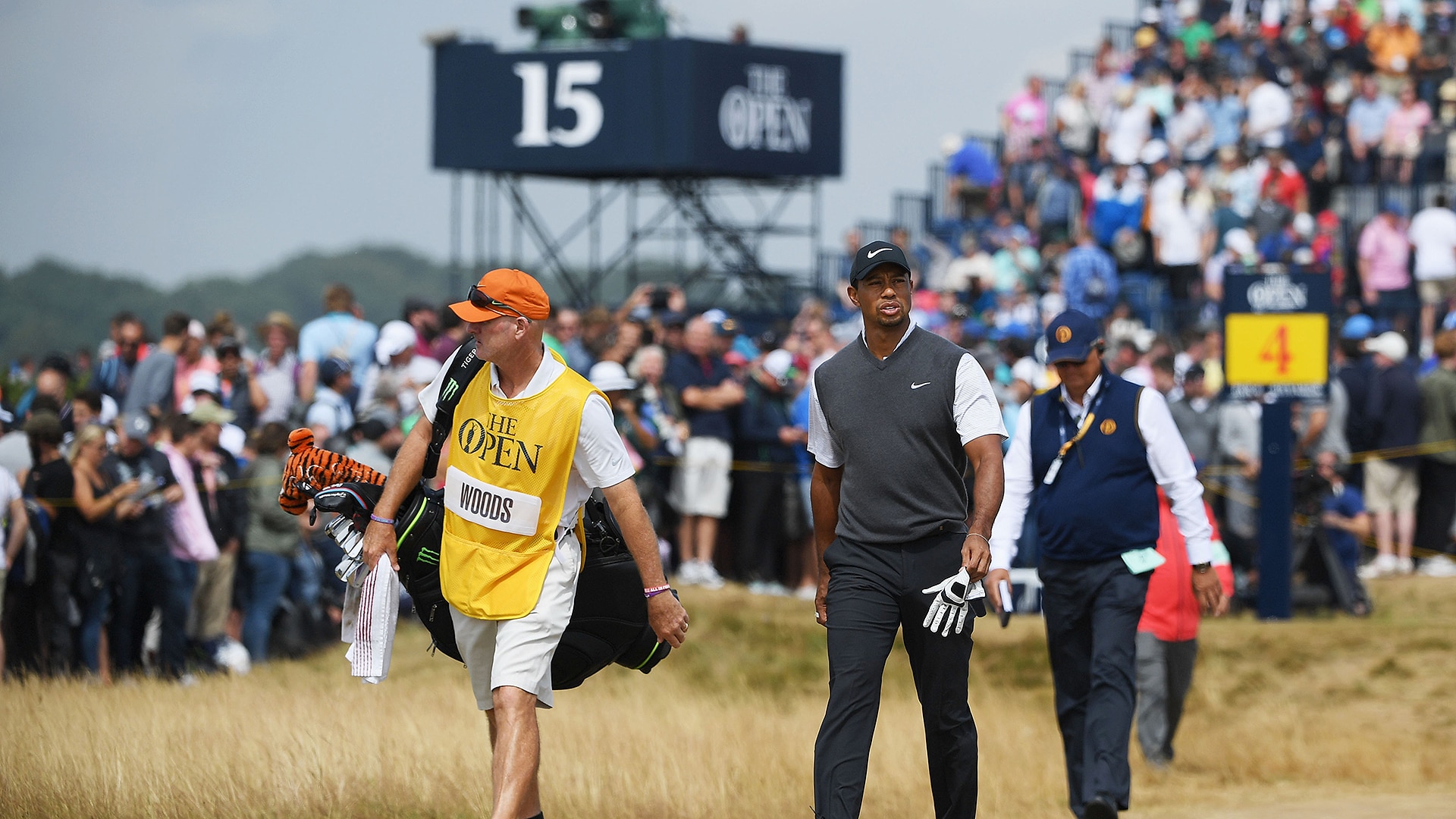 CARNOUSTIE, Scotland – As one of his idols charged into a share of the lead Saturday at The Open, Shaun Norris took note of the quality of shots and offered the type of informed analysis that can only come from those inside the ropes, in the heat of battle, with everything on the line.

“I don’t think he’s very far away from really taking everybody on again,” Norris said.

He was talking, of course, about Tiger Woods.

On a warm, windless afternoon that turned Carnoustie into a cupcake, Woods torched the ancient links for 15 mistake-free holes. He said afterward that he didn’t know that he’d joined the logjam at 6 under par … which seems hard to believe, because there was a massive yellow leaderboard to right of the 14th green that he appeared to be studying intently. But no matter. At 4:13 p.m. local time Saturday – 458 days after undergoing a fourth back surgery – Woods shared the lead in a major. Again.

He wasn’t about to reflect on the long, arduous journey to get here. Not with 18 holes left to play. Not with the need for another stellar round Sunday in high wind. Not with the bevy of contenders between him and the lead. A reporter tried to ask Woods where he’d rank a 15th major title, after his scandal and his injuries and his DUI arrest. The no-brainer answer is the very top of the list – it’d be the greatest comeback in golf history, if not all of sports. But Woods wasn’t ready to go there, not right now.

“I know what you’re trying to say in asking,” he said, breaking into a smile, “but let me try and get there first.”

Norris could have answered for him.

Toiling these days in Japan, Norris is a 36-year-old journeyman who is enjoying his best year as a pro, rising to No. 125 in the world. It’s rare that Woods’ playing partner is more fit than he is, but there stood Norris on the first tee Saturday, ready to rumble, his 200 pounds of muscle stacked on a 6-foot-2 frame.

Intimidated by Woods, he was not, but Norris walked away wholly impressed.

Impressed by Woods’ driving, perhaps his greatest bugaboo in this comeback.

Impressed by the precision with his irons.

Impressed by his lag putting.

Impressed by his course management and his golf IQ and his interaction with caddie Joe LaCava.

No, Norris has never won a major – in fact, this is just his second career appearance – but watching his playing partner dissect Carnoustie on Saturday, he knows that what he saw was good enough to win one, maybe more.

“I wouldn’t put it past him,” Norris said. “I think he’s got a great chance.”

Knowing that Saturday’s benign conditions offered the best scoring of the week, Woods wanted to stay in touch with the leaders. Getting up-and-down for par from 83 yards on the last preserved his 5-under 66 – his lowest score in a major in more than seven years. He’s four off the lead.

“It certainly is possible,” Woods said. “I’ve shown that I’ve been there close enough with a chance to win this year. Given what happened the last few years, I didn’t know if that would ever happen again, but here I am with a chance coming into Sunday in a major championship. It’s going to be fun.”

In the recorders’ office after the round, Woods asked Norris if there was anything he could do for him – other than offer him this memory of a lifetime, 18 holes on a major Saturday, with the crowd in full throat. Norris has a few friends back home in South Africa who are diehard Tiger fans, so he asked whether Woods would sign a few gloves for them. Woods emerged from scoring, toweled off his balding head and then scribbled his signature on the palm of four brand-new gloves, handing each to Norris’ caddie for safekeeping.

“Nice presents to give to my mates,” Norris said.

They’d be even more valuable if Woods went on to win Sunday, a scenario that seemed impossible a year ago but now, with the dodgy weather forecast, is not totally unrealistic.

Even if Woods comes up short, Norris didn’t hesitate in offering his own prediction.

“He’s close. Very close,” he said. “He’s definitely going to be at the top in a couple of months.”