Alabama football not the school's only dynasty 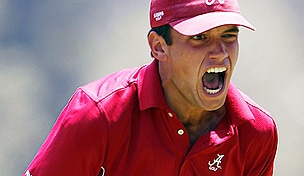 The powerhouse football team apparently isn’t the only dynasty at the University of Alabama.

The Crimson Tide also have a stranglehold on the No. 1 ranking in men’s golf – and no BCS computer was required.

Actually, those two worlds will collide this Saturday at Bryant-Denny Stadium, in front of more than 100,000 fans. The golf team will be presented its 2013 NCAA Championship rings during the Alabama-Tennessee game, and it seems poised to add to its collection of jewels this season.

The Tide’s standing as the No. 1 team in the country was solidified further this week at the Isleworth Collegiate Invitational, where they went wire-to-wire to sweep the team and individual titles against the second-best field of the season.

Two years ago, they lost the NCAA Championship to Texas on the final green.

Now, they’ve won all three of their fall starts, and nine consecutive overall (dating to the spring), and 10 of their last 11.

They’re winning this fall by an average of 15.3 strokes. During this nine-event win streak (the NCAA Championship is a match-play final), they have won by an average of more than 12 shots. Individually, an Alabama player has finished first or second in all eight stroke-play wins over that span.

“We all know this window will come and go,” Alabama coach Jay Seawell said this week, “but we want to enjoy it.”

And why not? For the first time since 2006, the Tide are enjoying a fruitful fall campaign.

Entering this season, Alabama had won just four of its last 16 fall starts. This time, the Tide won their season opener by 18 shots, their second event by 16, and now Isleworth by a dozen. Their last fall start is the Nov. 4-5 Gifford Collegiate at Pelican Hill in California.

“I don’t know if it’s some of the younger guys’ excitement, their first foray into college, or what,” senior All-American Cory Whitsett said. “But the quality of golf, there’s really been no change (since the spring). That’s a good thing.”

Last year, Alabama relied on Scott Strohmeyer to provide the senior leadership. Seawell had to say very little to inspire or galvanize the team, and that’s what he prefers – after all, he says, it’s a player-driven game. This season, that onus falls on the Tide’s trio of seniors, Whitsett, fellow Walker Cupper Bobby Wyatt and Trey Mullinax.

“After winning NCAAs,” Seawell said, “you wondered if Bobby, Cory and Trey were just going to cruise and try and get ready for the spring. But in August, before the Walker Cup, they had a meeting and said they wanted this fall to mean something. They were tired of the fall being average. Their determination, their desire to compete, that’s really been what’s fun to watch.”

Of course, it also helps to have a freshman like Robby Shelton in the lineup.

The No. 1 overall recruit in the 2013 class, Shelton began his college career with a victory at the season-opening event at Olympia Fields. He’s followed that triumph with a pair of top 15s. “And all of a sudden,” Seawell said, “everyone on the team went dang. We’ve got another good player, a guy that can get it done for us. I think that gave some energy to the older guys.”

In fact, the Tide are so deep this season, they only once have put freshman Gavin Moynihan, a 2013 Walker Cupper for Great Britain and Ireland, in the starting five.

Yes, Shelton certainly has played his part in helping fill the void left by 2012 Player of the Year Justin Thomas, who turned pro after his sophomore season. But the biggest difference-maker thus far has been Mullinax, a late-blooming senior who earned his second individual title this week at Isleworth, tying the tournament record at 11-under 205.

“He’s always been a great talent,” Seawell said. “He’s learning how to line up the dots, each day how to prepare properly. That win (at Isleworth) puts him in the conversation of some of the best players in the country. I wanted to see how he would handle the last round, with all of the pressure and being on Golf Channel, and to play the way he did, he’s really established himself as one of the elite players.”

Walking alongside Mullinax during each round this fall has been the most well-known assistant coach in college golf, Mike McGraw, who led Oklahoma State’s men’s program for eight years (and won the NCAA title in 2006) before he was surprisingly relieved of his duties in June.

“Mike brings a presence,” Seawell said, “and our players recognize that. He brings a champion’s attitude. He’s hungry, and they’re feeding off his hunger.”

Bringing in McGraw may prove to be one of Seawell’s best roster moves, better, perhaps, than landing any big-name recruit. Like Seawell, McGraw commands respect and knows how to win. He knows how to draw the best out of his players. He knows how to build a sustainable, successful program.