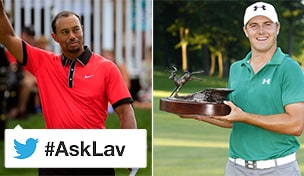 Golf doesn’t lend itself to instant analysis, yet it appears we have little choice when reviewing the 2013 PGA Tour season.

The new campaign begins in 14 days. So, yes, it’s best to post this now, before it’s a season too late.

Here, then, is one man’s roll call of award winners:

Player of the Year: Tiger Woods

If this were a blind rsum award, it wouldn’t even be close: five wins (including two WGCs and The Players), money leader, Vardon Trophy winner, No. 2 in FedEx Cup. Here comes POY title No. 11.

Rookie of the Year: Jordan Spieth

Announcing the other nominees was just procedural. This is a no-brainer choice, with Spieth making the biggest splash by a rookie since Tiger in ’96.

This new award likely will (and should) go to Compton. After all, he kept his card just five years removed from his second heart transplant.

Oh, if only this award hadn’t been retired. Two years ago, the newly minted FedEx Cup winner had slumped to No. 230 in the world. An epic comeback, no?

Honorable mention: Jordan Spieth holes out bunker shot at Deere; Jim Furyk wedge to set up 59; Patrick Reed from the trees at Wyndham

Both Scott putts were equally memorable: the ground-shaking birdie he made on the 72nd hole and the green jacket-clincher on the 10th hole. Maybe the nod goes to the playoff birdie, for that prevented the Masters from heading to a deflating Monday finish.

Tournament of the Year: Masters

From women in green jackets to the slow-play penalty to Tiger’s drop to the Scott-Cabrera slugfest, this year’s Masters, like so many before it, did not disappoint. Scott’s popular victory, and brawny finish, helped erase what was largely a sleepy Sunday.

January: No status on any major tour, No. 810 in the world. Now: PGA Tour winner, Presidents Cup selection, No. 21 in the world. Breakout, indeed.

Knucklehead of the Year: Sergio Garcia

In one month, he provoked Tiger on national TV, spectacularly kicked away a tournament, made a racially insensitive remark involving fried chicken and was the subject of jokes and criticism. One of the lasting images of 2013 – for this scribe at least – will be Garcia, walking down the fairway at Merion, while a fan screamed, “I ate the bones!”

Poor form, equipment and swing struggles, poor on-course comportment – add it all up, and it was a disastrous season for the former world No. 1. The only player in the top 35 in the world to gain fewer OWGR points than McIlroy (90.854) this year was Louis Oosthuizen (70.001), who spent months on the DL. Apart from a runner-up against a weak field in San Antonio, Rory was more or less a non-factor in 2013.

Despite more pressing concerns – you know, like, slow play and out-of-control distance – the sport’s governing bodies decided instead to tackle the anchoring ban. A cursory glance at the putting stats suggests it was a war not worth waging. And it wasn’t the last move that the USGA bungled in 2013.

The Tour’s preeminent ball-striker could be the favorite at any of the four major venues, but he’d seem to set up particularly well for Royal Liverpool, host of the ’14 Open, and Augusta National, where, despite his poor record there (one round in the 60s in 26 attempts), he can rope that power 3-wood around the doglegs.

Picked Keegan to be the ’13 POY and, yeah, well, it just didn’t pan out. This massive talent had seven top 10s, including two runners-up, but didn’t win. So now we’re doubling down.

Your mailbag questions for this week:

@RyanLavnerGC We keep hearing media side of Player of the Year -- has any voter actually said anything?

Publicly, theyre all in favor of Tiger. No one is trying to become a headline here. But because the voting process is essentially anonymous among Tour members, their actual ballots may tell a different story, whether they truly believe there was a more deserving player in 2013, they want to see Phil rewarded for a career achievement, or perhaps theyre turned off by Tigers rules snafus. The Tour doesnt disclose vote totals, but the guess here is that it wont be all that close.

@RyanLavnerGC how do you see the presidents cup playing out? #AskLav

Expect a blowout. Be thankful for anything closer. On paper, at least, this matchup is woefully one-sided. The U.S. teams average world ranking is 13.58; the Internationals is 33.25. The Americans have eight players inside the top 15; the Internationals have only one, No. 2 Adam Scott. The Americans have won 16 titles on the PGA/European tours this season; the International team has combined to win only five times. The U.S. team has won the Presidents Cup by at least a four-point margin each of the past three matches, and it would surprise little if it was even more lopsided than that. Could become known as The Mauling at Muirfield Village.

Out of shape, certainly. And, um, is that a tobacco stain on your base?

@RyanLavnerGC what was the best course you played this year while on the road. #AskLav

Well, Ill be hard-pressed to ever top the trip the GolfChannel.com boys had pre-British Open. The weather was perfect, and we walked 108 holes in four days (126 in six). The best track? Its likely a three-way tie between Turnberry ' where, it should be noted, I went birdie-birdie-par to finish ' Western Gailes and North Berwick. Stunning, all of them.

Hey @RyanLavnerGC, are you one of the 'friends' @henrikstenson is going to buy a vintage Coke machine for? #AskLav

Loyal readers of this mailbag will recall a few lengthy visits to the dentists office in recent months. Thus, the Stense knows Coke is off-limits for this guy.

I know he's not in the running, but could it not be argued that @JordanSpieth is POY? No Status to #21 in OWGR! #AskLav

Hey, Ive been on this bandwagon since Spieth was waxing kids in AJGA events, but lets not go overboard. Yes, he was the biggest climber in 2013, but he wasnt the best player. If hed closed out wins in Puerto Rico, Charlotte and Atlanta, OK, maybe. It was a great season, arguably the best ever for a rookie. And, sure, I guess it could be argued that he deserves some POY consideration. That argument just wouldnt have much merit.

@RyanLavnerGC You could win $10 million, but the one condition is that you'd never be able to wear a shirt again. Would you do it? #AskLav

Oooh, tough call. Id take the $10 million, and shirtless existence, but only after hiring a personal sun-blocker and sweat-blotter.

@DJPie @RyanLavnerGC You win the FedExCup, but have to live the rest of your life in Iowa. Do you accept? #AskLav

Yes, grudgingly, and I figure by 2017 I could probably become the mayor of Des Moines. First bill that would be passed, before the Solheim Cup rolled into town: making face painting a felony.