#AskLav: Turn down the noise; turn up the spotlight 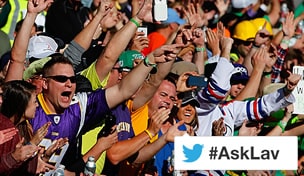 Getty Images
PONTE VEDRA BEACH, FL - MAY 08: Hideki Matsuyama of Japan plays a shot on the second hole during round two of THE PLAYERS Championship at the TPC Sawgrass Stadium course on May 8, 2015 in Ponte Vedra Beach, Florida. (Photo by Sam Greenwood/Getty Images)  -

Welcome to another installment of the #AskLav mailbag, where we are decidedly happier and more plump than this time last week.

Because, you see, just a few days after plopping down on the couch for nine straight hours to devour the wife’s artery-clogging snacks – OK, so I watched the Kitten Bowl, Puppy Bowl and Super Bowl in succession – your trusty correspondent finds himself doing the exact same thing this week … only this time enjoying stunning views of the Monterey Peninsula instead of East Rutherford, N.J., and also Brandt Snedeker’s happy-go-lucky demeanor instead of Peyton Manning’s, well, Manning Face.

(Oh, no, scratch that – just saw a replay of Manning frowning after hitting a pedestrian shot.)

Hey, on the first depressing weekend after football, we’ll take what we can get.

@RyanLavnerGC When will other events adopt the 16th hole BirdsNest idea? BIG $$ on just one hole. #AskLav

We can all agree that the fans on the 16th hole produce fantastic theater. You know, like chanting “A-Rod!” at Vijay, or “Sabbatini’s right behind you!” at Ben Crane, or “Porn star’s classmate!” at Scott Piercy. Tremendous stuff, all of it. In theory, the Tour could use a few more arenas like Scottsdale, because it’s the most well-attended event of the year (supposedly) and actually appeals to the younger demographic. But there’s a fine line, too: Scottsdale is great because it’s unique. If there are too many boisterous stops, it’s too much of a good thing. So here’s a quicker, easier solution that keeps the party going: extend it down the drivable 17th hole, since the tee box is already amid the pandemonium.

@RyanLavnerGC What are the odds Tiger hires me as his new swing coach or caddy? Maybe even takes me under his wing? #AskLav

Um, even worse odds than Tiger rekindling his relationship with Hank Haney.

@RyanLavnerGC If you were teeing it up this week at Pebble (as a pro) who would you pick as your amateur partner? #AskLav

Earlier this week on GolfChannel.com we debated which celebrity we’d want to play a round with at Pebble Beach. I chose Will Ferrell, for obvious reasons. If I wanted to win the pro-am portion, I’d probably take Kenny G. If I wanted to be entertained, I’d close my eyes, sigh deeply and select Kid Rock. And, if I wanted to have a brief glimpse into an existence I’ll never know, I’d team up, of course, with Tom Brady, if only for the five-plus hours of bliss.

#AskLav: Why is Adam Scott so good looking? – via Maxwell Anderson, on Instagram

Dunno, sir, but I’m hoping he is asked this at his Masters presser. If we knew the secret, wouldn’t all the magic disappear?

#askLav would Pebble ever consider a restoration? Look at #7 from the 20s compared to now; better/harder back then! http://t.co/7jLu1NY0rT

Cool contrast here. At some point, sure, Pebble probably will need a facelift – last year it checked in at only 6,816 yards for the tournament. That said, it still provides a stern test when certain forces (like the USGA and Mother Nature) collide. In 2010, when the Open was last held there, Graeme McDowell won at even par. In the final round, only six players shot a sub-par score. It was a war of attrition. But that week one of America’s most famous courses was stressed to the breaking point – brown and tricked up in spots. That’s no way for Pebble to exist.

#AskLav: Should rangefinders by allowed on the PGA Tour? – via Jaime Villarreal, on Instagram

Absolutely. Look, there’s little doubt that rangefinders help speed up pace of play. A recent study showed that lower handicappers (6-13) played about 30 minutes faster when they used rangefinders, while the higher handicappers (14-18) improved their pace of play by 17 minutes. Plus, the R&A recently allowed the use of the distance-measuring devices during its amateur competitions, and it’s reasonable to assume that the USGA will soon follow suit, too. Though certainly not imminent, the Tour will probably eventually permit caddies to use DMDs not just in practice rounds but during the actual tournament, as well. Hey, if nothing else, it’d be one less excuse for slow play at the pro level.