#AskLav: The year ahead for Tiger and Phil 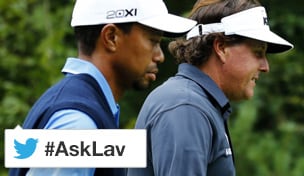 Getty Images
:ORLANDO, FL - MARCH 22: Morgan Hoffmann of the United States hits his tee shot on the third hole during the final round of the Arnold Palmer Invitational Presented By MasterCard at the Bay Hill Club and Lodge on March 22, 2015 in Orlando, Florida. (Photo by Michael Cohen/Getty Images)
-

Finally, the fans’ favorite week of the year has arrived.

You’ve read the preview stories, listened to the analysis from the talking heads, endured the endless hype leading up to the big event.

You’ve coughed up the money for a ticket.

You’ve crammed into an uncomfortable seat.

And now, you’re finally ready to roll up your sleeves (to ensure a nice, even tan, of course) and cheer lustily (and obnoxiously) for your favorite player while being entirely too close to thousands of sweaty spectators.

And this year should be no different: The forecast at TPC Scottsdale calls for mild temperatures with light winds and occasional beer showers. Sounds glorious.

After both starting their years off badly, do you think it's just Phil and Tiger beginning to show their age? #AskLav

Mickelson, for one, has been surprisingly durable throughout his career – last week was just his fourth career WD, and only his second since ’07. His back has flared up in each of his last two starts, and if Lefty is intent on making this a career year, he needs to shut it down until he’s absolutely 100 percent. As for Tiger, it’s fair to say he’s an old 38. He’s been in the spotlight for more than two decades, which takes its toll, and he continually pushes his body to the brink; in the past few years, his body has started to break down – elbow, neck, Achilles, knees (four operations). Their poor performances in Week 1 were about more than getting older, though. Last week I wrote about their respective war against Father Time, and how, over time, bodies and games must evolve when physical skills diminish. Phil and Tiger will be able to summon brilliant golf at times, but they’ll begin to have more off-weeks like Torrey as well.

#AskLav: Who is more likely to win a major this year, Kuchar or Sergio? – via Daniel Jaramillo, on Instagram

Matt Kuchar’s best bet to win a major this year will be at the Masters, where he has finished in the top 10 each of the past years. Look at his stats – he’s short (116th) and crooked (124th) off the tee, which usually isn’t a recipe for success at the majors, except for Augusta, where the rough is a non-factor.

Right now, Sergio Garcia’s a better pick, because he’s happy and in love off the course (for now), which means he’s dangerous on it. He has won two of his last three starts, he seems to be frowning less, and his putter has gone from being his biggest liability to his best friend. Sergio was ranked eighth – EIGHTH! – in strokes gained-putting a year ago. If he can wield the flat stick like that again, he should be able to break through in the Big Ones … so long as nothing conspires against him.

#AskLav: I believe Tiger will win a major this year, if not 2. Do you believe he will? And if so do you think it will ‘open the floodgates’ on his major drought? – via Kinley Lee, on Instagram

Do I believe he will win one? Yes – this foursome of major venues is too favorable for him not to add to his major haul. If he doesn’t win one in 2014, it’s reasonable to wonder if he’ll ever get to 15, let alone 18. But opening up the floodgates? No, not like the old days. Majors are harder than ever to win because golf is deeper than ever. These days, winning a major requires superior ball-striking, sublime putting and even a little luck. One little mishap on Friday – see: 15 at Augusta – can affect the outcome on Sunday. The days of expecting multiple-major seasons are long gone.

#AskLav what did you make of tigers swing at torrey?

The most noticeable thing about Tiger at Torrey was that he definitely had gained muscle mass – the guy looked like he could suit up Sunday for the Broncos. As for his swing, well, I have no clue. Compared to my action – little lower body rotation, hands outside on the takeaway, awful impact position – Tiger’s looked flawless.

#AskLav: Do you think Jordan Spieth’s performance on Sunday at the Farmers showed he’s not quite ready to win the big tournaments yet? – via Ben Ehrlich, on Instagram

Wrote about this Sunday from Torrey, but the kid is still learning how to win at the highest level. It’s easy to anoint him the Next Big Thing because he had a decorated junior and amateur career and, a year ago, he had a lot of top 10s, backdoored a win at the John Deere, advanced to the Tour Championship and played on the Presidents Cup team. Huge potential. But Spieth himself admitted in San Diego that he “wasn’t really mentally ready to win this week,” and that, under the gun, he didn’t have a go-to shot for the first time in a tournament. A month earlier, he had a shaky back nine at Kapalua with an ice-cold putter. Remember, he is just 20 years old, with one full year under his belt, and he’s already been in a position to win a dozen times. The wunderkind is too talented not to figure it out soon.

#AskLav: Hey Ryan, do you think Phil Mickelson will be No. 1 this year? – via Todd Peters, on Instagram

Short answer: Um, no. He’s never been No. 1, and it’s likely not coming in his age-43/44 season, either. Tiger, Rory and Adam Scott all will have better years than Phil, who won’t play enough in late summer and fall to make up ground in the OWGR.

#AskLav: When will Bubba Watson win another tourney? Been a lot of starts since his Masters win – via Charlie Lallas, on Instagram

Indeed, the 2012 Masters winner has gone silent. He had just three top 10s a year ago, a hugely disappointing campaign as he transitioned to life as a major winner and, more importantly, as a father. His stats weren’t much different from 2012 to ’13 (still top 5 in driving distance and greens hit), and he actually improved in putting (157th to 119th). Bubba will always be a streaky talent who can catch fire and notch a W at any time. He just needs to be properly motivated.