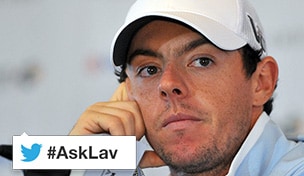 Getty Images
DUBLIN, OH - OCTOBER 03: Adam Scott of Australia and the International Team hits his tee shot on the third hole during the Day One Four-Ball Matches at the Muirfield Village Golf Club on October 3, 2013 in Dublin, Ohio. (Photo by Andy Lyons/Getty Images)  -

Unfortunate timing, these latest Rory McIlroy reports. Because during the soft opening to the 2013-14 PGA Tour season – or whatever you’re calling it these days: the Silly Season, the Fall Series, or the What-I-Watch-When-A-Boring-Football-Game-Is-On Swing – any semblance of news involving a former world No. 1 immediately goes above the fold.

It’s particularly unfortunate for Rory, of course, because these headlines have little to do with his on-course form (for now) but instead concern his relationship – that he and his longtime girlfriend reportedly booked a one-way ticket to Splitsville – and his ongoing lawsuit with his former management team, including an embarrassing claim that McIlroy signed his deal with Horizon Sports while at a Christmas party and without first seeing a draft of the contract. (Too much eggnog, perhaps?)

The former story is none of our business. The latter could become messy, if it hasn’t already, especially given the expected trial date (October 2014, a month after the 2014 Ryder Cup, where McIlroy and former stablemate Graeme McDowell will likely team up) and the early leaks of how much he is expected to bank from various endorsement deals over the next five years (reportedly at least $129 million).

Yes, these are the perils of being a high-profile athlete, but they come in the wake of arguably his most difficult season yet, from the oft-scrutinized equipment change to the walk-off to the bad swing habits and mediocre results. Add it all up, and it was a forgettable year (with six more starts to go).

As one loyal mailbag reader (and esteemed peer) tweeted to us Wednesday, the real question now has little to do with Wozzilroy. It is this:

@RyanLavnerGC Serious question: Can Rory pull out of his soap opera tailspin this season and get back to where he was in 2012?

So, enough pillow talk. Were tackling that question and more in this weeks #AskLav mailbag:

Rory had 10 top 10s in 16 starts in 2012. That included five worldwide wins, including two in the playoffs. That included a major. He was first in scoring average. He was second in the all-around ranking. Across the pond, he captured the season-long Race to Dubai. It was a career season, at age 23.

And then this year happened. His best chance to win came in San Antonio, when the rest of the worlds elite were back home preparing for the years first major. He didnt win, he had only five top 10s in 16 starts and he failed to reach the Tour Championship but really, his 2013 stats were reasonably similar to what he showed in 2010 and 11 ' when he was brilliant and unremarkable in equal measure. His greatness came in spurts. Would McIlroy have continued his worldwide tear in 2013 had he not changed his equipment and fallen into bad habits? Thats impossible to know, of course, but this much seems certain: You cant summon winning golf when your mind is elsewhere.

Whose name will we be hearing more of 5 years from now, Lydia Ko or Guan Tianlang? #AskLav

Ko, and Im not sure itll be particularly close. At 16, she is already No. 5 in the Rolex Rankings and a two-time LPGA winner. Guan, who turns 15 later this month, won the Asia-Pacific Amateur and made the cut at Masters, where he relied not on strong ball-striking but rather sublime putting (no three-jacks on those perilous greens) and sound course management (made no worse than bogey in four rounds). Of course, its reasonable to expect that he will only get bigger and stronger and better, but Ko, less than two years older, is already contending in majors. She possesses world No. 1-caliber talent playing on a tour that isnt nearly as deep.

#AskLav Do you see Tiger breaking his major drought in 2014? If so; which venue do you think sets up best for him?

Yes, but truth to tell we thought the same thing in 2012 and 13 and here we are. Tiger will be the prohibitive favorite at each major he plays next year, and not just because hes the world No. 1 coming off a five-win season. He has won four times at Augusta, though not since 2005. In two U.S. Opens at Pinehurst, he finished T-3 (1999) and solo second (05). He won the last time the Open was held at Royal Liverpool, back in 06. And when the PGA was last contested at Valhalla, in 2000, guess who hoisted the hardware? TW. So, yes, he has plenty of good memories with the 2014 major venues ' and it still guarantees absolutely nothing.

@RyanLavnerGC What chance does Georgia have after losing at home to Mizzou? #AskLav

Low blow, though in fairness I, too, thought my Dawgs would lose to Missouri. After all, it was asking a lot to knock off a hungry, undefeated team when youre missing two world-class running backs, three of your four best wide receivers, and the Swiss-cheese defense cant even stop a mailman. Still, UGA has a good shot to win the SEC East and reserve a spot at the championship table with Alabama. Your Tigers, meanwhile, are due for a market correction.

Three of the next four Ryder Cups (through 2020) are at courses that should be familiar to many players and fans ' Gleneagles, Hazeltine and Whistling Straits. On the docket for 2018 is Paris Le Golf National, which has hosted the French Open for a number of years. As for the Presidents Cup, we know only that its heading to the Jack Nicklaus Golf Club in South Korea in 2015, which effectively neutralized any advantage the Internationals might have enjoyed. I never have been a fan of gussying up a regular Tour stop, like what we saw earlier this month at Muirfield Village. Theres no mystery, no strategy. Thats why the cup at Royal Melbourne was such a treat in 2011, and not just because its one of the worlds best courses. It was unfamiliar to many.

@RyanLavnerGC #ASKLAV IF HULK WANT TO START NEW GOLF BOY BAND, YOU IN?

Fortunately for you, this scribe has mini-tour talent on the drums. Owned a drum kit as a kid/teen, and I would Hulk-smash on the cymbals late into the night. Even now, when crippled by writers block, Ill close my eyes and tap on the table for a few minutes, much to the displeasure of those nearby.