An emotion-filled day for champion Alabama

Getty Images
“I'm just trying to build towards April.” – on his game plan for this season on Tour.  -

“I don’t know whether I’m trying to hold on to y’all or what,” the Alabama coach said, “but I can’t wait to go do this one more time.”

This meeting wasn’t about yardage books or strategy, shot selection or mind games. This was about legacies, about seizing an opportunity, about reminding this trio of seniors why they turned away potential riches for the chance to win another national title.

The meeting turned out to be just part of a typically emotional day for Seawell. He cried three times Wednesday … before the first ball was even in the air at Prairie Dunes

He cried as he played “One Shining Moment” in his hotel room, because he loves the song.

He cried during the team meeting, because, well, he loves these kids.

And he cried on the first tee, because he loves these moments and knows these opportunities are precious. He couldn’t fathom that Alabama was on this stage again, for the third consecutive year, after losing a final-hole heartbreaker to Texas in 2012 and routing Illinois in 2013.

The team meeting may initially have had a calming influence, but the pressure of solidifying a legacy weighed heavily on the minds of the team’s seniors.

“I wanted to go out on top,” Cory Whitsett says. “I felt like we were winners while we were here, and I wanted to be remembered for that.”

Fellow senior Bobby Wyatt assured a memorable ending to his college career, relaxing the rest of the team – and his teary-eyed coach – by making an ace on the second hole of this NCAA Championship final against Oklahoma State.

In his traditional leadoff spot, Wyatt set the tone with a 3-and-2 victory, sensational freshman Robby Shelton birdied nine of his last 13 holes to defeat Zachary Olsen, and senior Trey Mullinax poured in a 15-foot eagle putt on the 17th hole to secure the clinching point for top-ranked Alabama in its 4-and-1 victory over the No. 2 Cowboys.

The Tide became the second team in the past three decades to win back-to-back national titles, ensuring their place as one of the best squads of all time.

The seniors’ legacy? All three recorded a point in their last-ever college match.

“What more could you have asked for?” said Whitsett, but the finality of the moment had already set in by the time Seawell sprinted down the 17th fairway to embrace his senior leader.

“We’ll never have this again, with these guys,” he said. “You don’t get to share your life with many people like this.”

This, after all, was the end of a four-year run that turned Alabama into a national powerhouse, three seniors into tantalizing pro prospects, and two men into better coaches.

Seawell is in his 22nd season as a college coach, and times haven’t always been this sweet. For six years he made $7,500 a year as a JUCO coach in Anderson, S.C. He brought his first child home to a dorm room. To make space, he and his wife, Stephanie, removed a door in the kitchen and converted it into a nursery.

He spent a few years at tiny Augusta State before landing the head-coaching gig in Tuscaloosa. A lot of hard work, some good fortune and a few stellar recruiting classes later, Alabama was a national superpower.

“These guys have changed my life,” he said. “I’m thankful that I was wise enough to learn from their greatness.”

Assistant Mike McGraw’s history, of course, is a little more complicated. Last June, he was fired by Oklahoma State after two sub-par seasons. Seawell called him within 24 hours of that surprising decision; McGraw committed almost immediately.

It was reasonable to wonder how they would coexist, Seawell and McGraw, one man ADD and the other OCD. Alabama didn’t need two head coaches. The Tide already had one, a good one, and he was fresh off an NCAA title with a roster equipped to do it again.

What Seawell and this team needed was not the hard-nosed, straight-edged coach from Oklahoma State. They needed the seventh-grade social studies teacher, the high school golf coach, the junior golf director that McGraw was years ago.

This group made the transition easy for McGraw. They joked with him, quizzed him, prodded him, sang rap songs in front of him. They called him “Google,” because he knew just about anything about everything.

“I was in transition,” McGraw said, “and I think Jay saved my career. I needed a change in my life.”

“He thanked me for breathing enthusiasm back into his heart,” Seawell said.

The day the 54-year-old coach signed to become the assistant at Alabama, Whitsett told his father that he was going to win a national championship – for McGraw. That they did so Wednesday against Oklahoma State – with a five-man roster that McGraw recruited himself – only made the past 50 weeks all the more remarkable.

In the hallway of Prairie Dunes’ clubhouse, two coaches ended the day the way it had began – in tears, thankful for each other and this team.

“I got to go along for this ride,” McGraw said, “and I’ll never forget this day as long as I live." 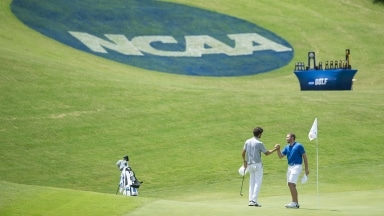 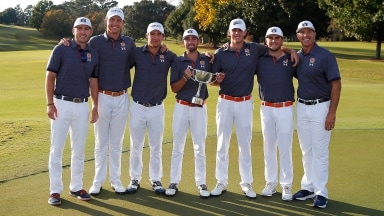 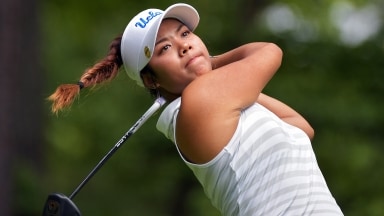