Finally, DJ shakes the monkey off his back 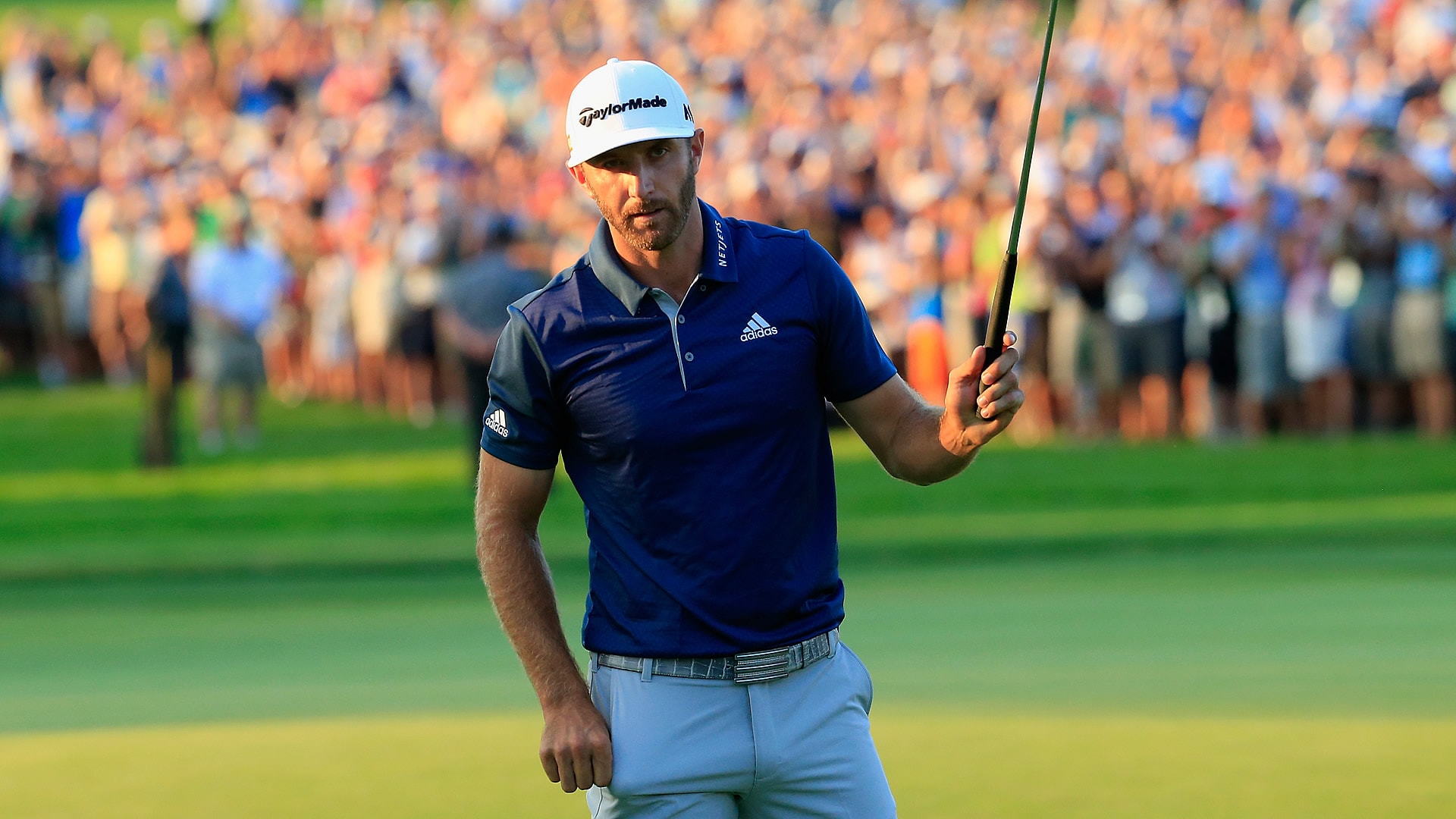 OAKMONT, Pa. – Of the many ways Dustin Johnson has lost a major championship – poor decisions, untimely swings, rotten luck, even head-scratching negligence – this U.S. Open had the potential to be the most soul-crushing.

Yes, there was the self-immolation at Pebble Beach.

And the inadvertent grounding of his club in a Whistling Straits bunker.

And the shank out of bounds at Royal St. George’s.

And the three-putt on the bumpy 18th green at Chambers Bay.

But for golf’s most gifted and cursed star, none of those blunders compared with what transpired Sunday at Oakmont during one of the most bizarre final rounds in major-championship history.

After all of Johnson's stumbles, now there was a disputed ruling that left players wondering where they stood on the back nine of a major?

“Just one more thing to add to the list, right?” he said with a smile late Sunday. “It’s nothing new at this point. It’s happened so many times, I’ve kind of come to expect it now.”

Yet this time, the outcome was different. This time, a four-shot deficit, an on-the-edge setup and a controversial decision by the USGA didn’t stop Johnson in his ill-fated pursuit of that elusive major. This time, the very attribute for which he is most often criticized – a lack of mental fortitude – was the reason why he closed out this 116th U.S. Open amid the most unusual circumstances.

“To finally get it done on Sunday in a major, it’s a huge monkey off my back,” he said. “I’ve put myself in this position many times, and to get it done is definitely sweet.”

After the recent near misses, and after the rules snafu Sunday, it’s hard to imagine a more popular or satisfying major winner than Johnson.

The initial confusion began on the fifth green, where Johnson lined up a 5-foot par putt. He made a few small practice strokes next to his ball, lifted his putter, and noticed that his ball moved slightly. He called over the USGA rules official to discuss the situation, and he, fellow playing competitor Lee Westwood and the official all agreed that because Johnson didn’t ground his putter, he couldn’t have caused the ball to move. They played on.

But nearly two hours later, after Johnson had moved two shots clear of a floundering Shane Lowry, he was informed on the 12th tee that the rules issue was still under review.

“Is there anything you could have done that caused the ball to move?” the USGA’s Jeff Hall asked Johnson.

And so the matter, Hall said, would be resolved following the round. That uncertainty didn’t sit well with Westwood, who voiced his displeasure with the three rules officials in the group.

“I’m his playing partner, I’m his fellow competitor, and I’m not going to come down on his side and be biased if something happened that shouldn’t have happened,” Westwood told GolfChannel.com as he walked to his courtesy car late Sunday night. “But he didn’t cause it to move. It’s a shame it got revised.”

Naturally, social media exploded, with tweets from Rory McIlroy to Jordan Spieth to Rickie Fowler blasting the USGA’s actions. Their issue was two-fold: It was obvious that the severely sloping greens pushing 15 on the Stimpmeter, not Johnson, had caused the ball to move; and the USGA decided to inform Johnson and the walking scorers that there was only a possibility that he’d be docked a stroke at the end of the round under Rule 18-2/0.5, creating confusion for the rest of the field.

“Golf is a game of honor,” Jack Nicklaus said afterward behind the 18th green. “When you have a situation where an official is there and said, 'Did you cause it to move?' He says, 'No.' That should be the end of the story.”

Johnson has already become a sympathetic figure after his many major crackups, but as word of the potential pencil-whipping spread across Oakmont, the sun-burned spectators were even more boisterous in their support as they tried to push him across the finish line.

After the official interference, Johnson responded with five pars and a bogey to take what appeared to be a three-shot lead over Lowry and Scott Piercy. Despite his tortured history with 72nd holes, Johnson piped a 302-yard drive down the center on 18, then stuffed his 192-yard approach to 5 feet, sending fans in the packed grandstands into a tizzy. He would play his last seven holes in even par to shoot 69.

“The ability to shake off stuff like that, I still haven’t figured it out,” said his brother/caddie, Austin. “I’ve been trying to do that for 29 years now and I can’t figure it out. He’s unique when it comes to that. Nothing fazes him.”

With his approach in tight, Johnson slinked to the 18th green like a jungle cat. Fans rose to their feet and chanted, “Dee-Jay! Dee-Jay!” When his short birdie putt dropped, when his victory was secure no matter the penalty, he hugged Austin, scooped son Tatum into his arms, and smooched fiancée Paulina, prompting a slew of catcalls from the crowd.

Waiting behind the green was USGA executive director Mike Davis, who delivered the buzzkill that Johnson was still needed in the clubhouse for the rules review. After a 15-minute meeting with the four-person committee, Johnson was assessed the one-shot penalty, but it mattered little. He won by three, not four, and so he sauntered back toward the 18th green, hand in hand with Paulina, his trophy awaiting.

“I thought it was great,” Westwood said. “He held himself together and didn’t let it get to him.”

The trophy presentation was awkward at best.

Before Fox’s Joe Buck could even finish his question about how Johnson overcame the rules controversy, fans surrounding the green unloaded a chorus of boos so loud that it drowned out the inquiry. In the background, Davis wore a pained smile; USGA president Diana Murphy stood stone-faced behind the podium, her eyes begging Buck to change his line of questioning.

“This means absolutely everything,” said Johnson’s manager, David Winkle. “It’s validation for all of the work he’s done.”

That Johnson captured his first major a year after his most crushing loss was even more remarkable.

Perseverance never has been Johnson’s problem; his ability to put himself in position to get his heart broken over and over again was admirable, if not a bit depressing. But since Chambers Bay, he’s looked particularly vulnerable down the stretch, coughing up leads, exposing his flaws and offering even more ammunition for a growing legion of critics.

In the past year alone, there was a 75-75 finish at St. Andrews after holding the 36-hole lead. And there were weekend wobbles at Firestone … and Torrey Pines … and Doral. Even last week, at a mid-level PGA Tour event in Memphis, he threw up a 73 while in contention. His final-round scoring average (70.67) was more than two shots higher than Round 1 (68.33). Not one for introspection, Johnson shrugged off his Sunday woes as simply part of the game.

“It’s hard to win,” Nicklaus said, “particularly when you’ve been there a lot and don’t win. We’ve all been through it. You learn from that. If you don’t take it and learn from it and use it for your benefit, then it becomes a problem. If it continues to happen, then all of a sudden it gets in your head and you can’t really get it out.”

Oh, it's out now. Johnson's reputation as the best player not to win a major, as golf’s immensely talented but star-crossed sensation? It's gone, forever, after this unforgettable Sunday.

“I always knew this would happen, and I think it’ll happen multiple times,” Winkle said. “But it doesn’t matter who you are: You have to get the first one before you can get the second one. This was a huge hurdle.

“He’s always processed all this stuff differently than everybody else. But the clock is ticking, the questions grow and grow, and now he’ll have a little bit of relief from people wondering if he’ll ever get it done. A lot of people might have lost faith as to whether he was going to close one of these out, but he never did.” 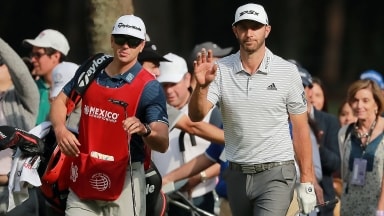 Stairs get another Johnson, this time it's Austin

When it comes to PGA Tour housing, the Johnson brothers might want to start looking into one-story options. 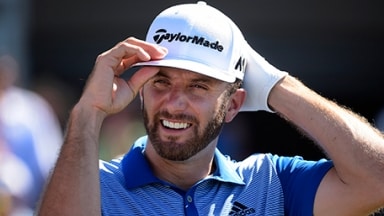 DJ's strength coach on the bag at Kapalua

When Dustin Johnson’s brother and caddie, Austin, injured his back earlier this week in Maui, trainer Joey Diovisalvi was pulled in as an 11th-hour replacement.