Garcia finally at peace with himself, Augusta? 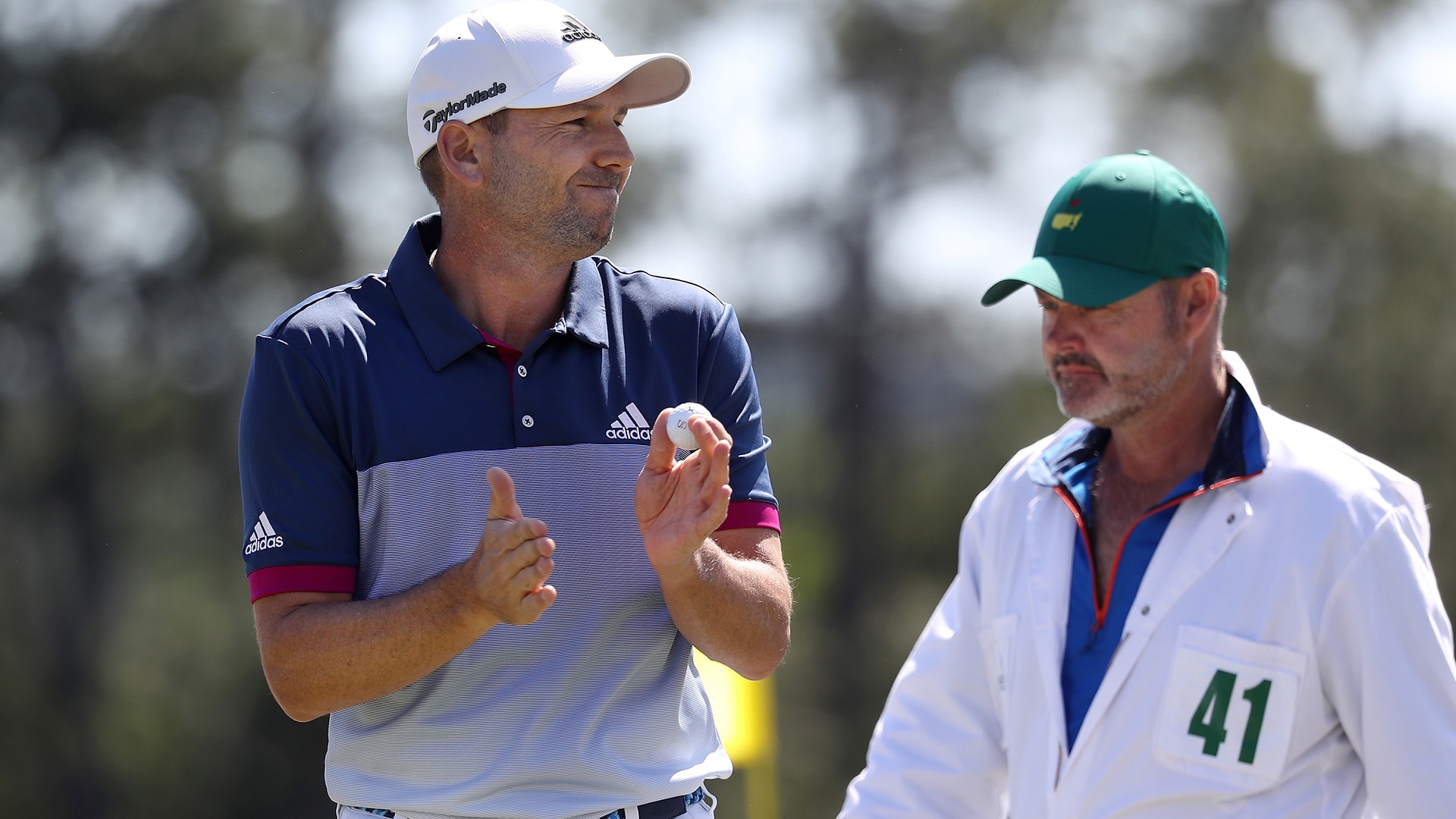 It can’t possibly be the same Sergio Garcia who once said that he doesn’t have what it takes to win a major.

Who once suggested that he was playing against more than the field.

Who once criticized Augusta National – a place where Sarazen and Nelson and Snead and Hogan and Nicklaus and Palmer and Woods all have won – as unfair and “too much of a guessing game.”

Yes, this sure looks like Sergio – the playful demeanor, the fist pumps and the heat-seeking missiles coming off his clubface – but it definitely doesn’t sound like him. Now one of golf’s most tortured characters is openly talking about accepting bad breaks. About trying to be more positive. Even about winning major titles.

“Things are happening at the moment,” he said.

Garcia has been coming to Augusta for 19 years now, but never has he played like this.

With wind gusts topping 30 mph, he went bogey-free over the first 21 holes to stay in touch with Charley Hoffman, who sprinted out to the lead with an opening 65. Garcia trailed by seven, but he ran off three birdies in a row to start his second round. By the 10th hole, he led outright.

Of course, it wouldn’t be a Sergio round without some drama, and there was plenty of it Friday – a live-scoring error, a lipped-out bunker shot (his best ever!), a striped 3-iron over a creek to set up a two-putt birdie, and two stuffed short irons to close. At 4-under 140, he is tied for the halfway lead with Hoffman, Rickie Fowler and Thomas Pieters.

“He just played well,” Lee Westwood said. “Had his ball under control.”

Now, the pessimist would view Garcia’s rise to the top of the leaderboard as another chance for the Spaniard to get his heart broken Sunday – on what would have been Seve Ballesteros’ 60th birthday, no less.

In this Masters field, only Westwood (75) has more major starts without a victory than Garcia (73).

Simply put, a major title of any kind would be historically resilient. That it no longer consumes him is a clear sign of his growth.

A cherry on top? Who is this guy?

Now 37, Garcia is coming into his own, and at Augusta National, of all places. It was two years after his painful loss at the 2007 Open – when he lamented his ongoing war with the golf gods – that he first took out his frustrations on the home of the Masters. Reinforcing his petulant reputation, he whined: “I don’t think it’s fair. It’s too tricky.”

Three years later, with his major drought growing ever longer, Garcia waved the white flag at Augusta, confessing that he wasn’t good enough to win one of golf’s most important titles. “In 13 years I’ve come to the conclusion that I need to play for second or third place,” he said then.

Reminded of those immature comments Friday, Garcia said: “It’s the kind of golf course you have to get to know a little bit. Make peace with it a little bit.”

Part of that process was accepting that good shots here aren’t always rewarded – that an approach can land next to the hole but drift 40 feet away. A younger Sergio would have railed against the course. Blamed someone else. Now, he tries to see the big picture, to absorb the bad breaks, to remind himself of the good memories and move on.

How did he arrive at this point? To hear Garcia, it was some occasional tough love from those closest to him, including his fiancée, Angela Akins. They are set to marry in July.

“I’m trying to change a little bit on that aspect, on accepting things,” he said. “I still have to get so much better at it. But what that shows me is that I have a lot of room for improvement, so that is something very positive.”

The physical aspects have never been a question with Garcia. He remains one of the game’s preeminent ball-strikers, even if his putting (currently ranked 193rd) occasionally abandons him.

“He’s always been a good player,” said Westwood, who has competed against Garcia for nearly two decades. “I haven’t seen him change much. His game looks the same as it did when he was a 19-year-old. Admittedly, he doesn’t run around and bounce up and down quite as much. Probably an age thing.”

But with age comes wisdom. And perspective. And balance.

And, perhaps most of all, the confidence to end all of that insecurity.

“I probably didn’t accept things as well as I should have,” he said. “But I’ve shown myself many times that I can contend and I can truly feel like I can win not only one, but more than one [major].”

Maybe he gets it done Sunday. Maybe he doesn’t.

For the first time, he sounds ready.