A little magic, a lot of maturity lead Garcia to a major 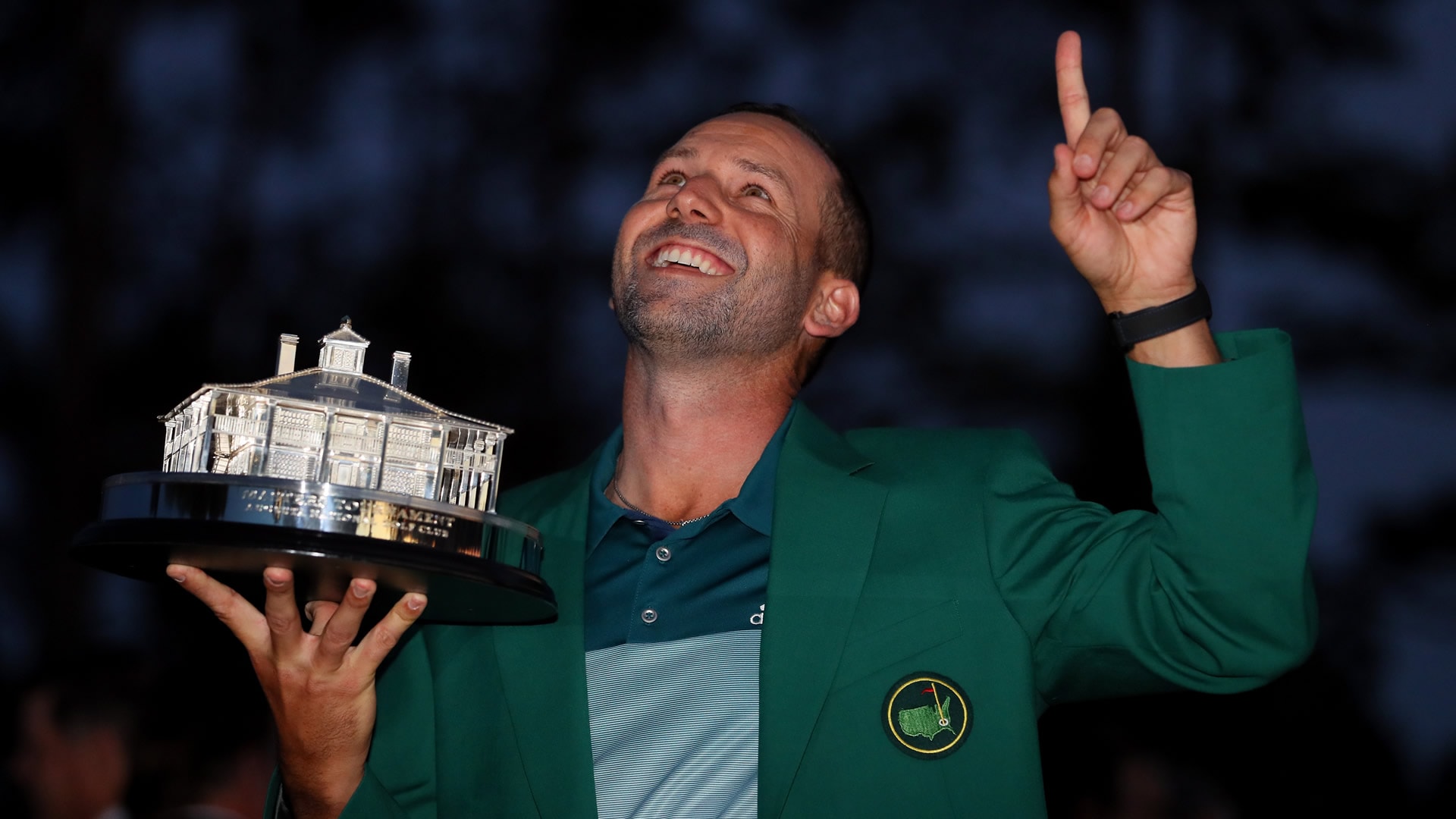 AUGUSTA, Ga. – There they went – the ghosts and the demons and the goblins, all exorcised during a victory celebration he never anticipated at a course he never could have imagined.

Sergio Garcia crouched, shook his fists and unleashed a primal scream – “YESSSSS!!!” – that’s been bottled up for 19 years.

The only line missing from his otherwise stellar résumé was a major title, and now it’s his, all his, after a wild Sunday at the 81st Masters that perfectly embodied his schizophrenic career.

And then finally, after curling in his 12-foot birdie putt, Garcia was one ahead when it mattered most, defeating Justin Rose on the first playoff hole in an instant classic at Augusta National.

“Nobody deserved it more than you do,” Rose told Garcia on the 18th green. “Enjoy it.”

Often criticized in his early days for making excuses, for folding at the first sign of trouble, Garcia proved to be historically resilient. His breakthrough victory came in his 74th career major start, the most by any player in history.

Garcia proved to be just as irrepressible in the final round.

Two strokes behind on the 13th hole, he saved par from the trees, added another birdie at No. 14 to cut into the deficit, and then hit one of the most brilliant shots of his career on the par-5 15th – a high-soaring 8-iron from 189 yards that kissed the flagstick and led to an eagle.

His career has been filled with near misses, with crushing disappointments, but it was Garcia, not the U.S. Open champion Rose, who played the most sublime golf down the stretch to capture the long-awaited major title.

“Obviously this is something I wanted to do for a long time, but it never felt like a horror movie,” Garcia said. “It felt a little bit like a drama, maybe. But obviously with a happy ending.”

Before heading off property, Rose stumbled into Garcia, now donning the green jacket, at the front of the clubhouse.

“Look at this man!” Rose gushed. Then he enveloped his friend in another hug.

The Spaniard’s feel-good victory was a fitting end to a surreal Masters week, which began with no Arnie, no Tiger, no Par 3 Contest and, in the most bizarre twist of all, no world No. 1. Throughout his mostly star-crossed career, Dustin Johnson has found unimaginable ways to lose a major – including now, before it even starts. While in his Augusta rental house Wednesday he slipped on a staircase, injured his lower back, and after 24 hours of treatment couldn’t answer the bell. “It sucks really bad,” he said.

What he missed was the most brutal opening round in a decade, when players walked with their chins buried in their chest and patrons chased after their windblown hats and pairing sheets. The 40-mph gusts muted Augusta’s raucous soundtrack, and just nine players were under par after two days.

Four-time Tour winner Charley Hoffman shot a remarkable opening 65 and held the halfway lead, but the majesty of Augusta is that, eventually, the stars rise to the top of the board. By the end of a sun-splashed Saturday, Hoffman was supplanted by the likes of Garcia and Rose, with Rickie Fowler one shot behind.

Another stroke back, improbably, was Jordan Spieth, who had entered the Masters as the subject of unrelenting scrutiny after last year’s historic collapse. At first he’d politely allowed the psychoanalysis, a product of his respectful Texan upbringing, but by the time tournament week rolled around he clearly wanted to move on. And everyone did, initially, after he safely navigated the 12th in his first visit since the watery debacle. Then Spieth took another quadruple bogey, this time on the par-5 15th, and ended the opening round 10 shots behind, a major deficit that hadn’t been overcome in 119 years.

Showcasing his trademark grit, Spieth shot rounds of 69-68 and entered the final round two shots behind, in the penultimate group. It was the first time in four Masters that Spieth wasn’t in the final pairing Sunday, and yet he seemed to delight in being the go-for-broke pursuer. “Finishing fifth versus 10th doesn’t mean much to me,” he said, “so that frees me up a bit.” Perhaps too much. He went out in 38, rinsed another tee shot on 12 and dropped out of the top 10.

Spieth and Garcia couldn’t have had more wildly different experiences at this place. Ever since he arrived here as a 19-year-old, Spieth and Augusta have gone together as well as egg salad and lemonade, or sundresses and the sixth hole. Garcia, meanwhile, has had a particularly tortured relationship with the old nursery. It was here eight years ago that he dismissed the home of the Masters as unfair and “too much of a guessing game.” And it was here five years ago, after enduring nothing but major heartbreak, that he conceded, “I’m not good enough … I don’t have the thing I need to have.”

Never mind that he was a 30-time winner around the world, a Ryder Cup hero.

“Because where my head was at sometimes, I did think about, Am I ever going to win one?” he said Sunday night. “I’ve had so many good chances, and either I lost them or someone has done something extraordinary to beat me. So it did cross my mind.

“But lately, I’ve been getting some good help, and I’ve been thinking a little bit different, a little bit more positive. And accepting too, that if for whatever reason it didn’t happen, my life is still going to go on. It’s not going to be a disaster.”

Now 37 and three months from getting married, Garcia was downright buoyant between the pines. He playfully chatted with his fellow playing competitors and showed no signs of the historic major burden, his 12 major top-5s the most by any winless player in the past 75 years.

“It’s the same Sergio that people have known and loved,” said his fiancée, Angela Akins. “But he’s just been working really hard on his game off the golf course. He’s been focused on his mental game. He’s done an incredible job.”

The golf gods seemed to reward Garcia’s newfound perspective and upbeat attitude, whether it was his hooked tee shot ricocheting off a tree and bouncing back into the fairway in the second round, or his approach into 13 somehow hanging on the bank above Rae’s Creek on Saturday. Those fortuitous breaks allowed Garcia to take his first share of the 54-hole major lead in a decade – on what would have been the 60th birthday of one of his heroes, Seve Ballesteros.

“I’m not sharing my locker at the moment,” Olazabal wrote to Garcia, “and I hope that I get to do it with you.”

“I really believe that he has all the tools to win around here, or any major,” Olazabal said Sunday morning. “He’s been so close a couple of times.”

Just not on this course. Not until Sunday.

Leaving the fifth green, Garcia was 2 under for the day and staked to a three-shot lead. That advantage disappeared quickly, as Rose poured in three consecutive birdies before the turn.

They headed to the back nine tied at 8 under par, but Garcia made back-to-back bogeys on 10 and 11 to fall off the pace. When he overcooked his tee shot into the trees on 13, and needed to take an unplayable lie from the azaleas, he seemed destined for an all-too-familiar ending.

“In the past, I would have started going at my caddie, ‘Oh, why doesn’t it go through?’ or whatever,” he said. “But I was like, well, if that’s what’s supposed to happen, let it happen. Let’s try to make a great 5 here and see if we can put a hell of a finish to have a chance. And if not, we’ll shake Justin’s hand and congratulate him for winning.”

Garcia made that unlikely par, then birdied the 14th after stiffing his approach shot to 5 feet. On 15, after nuking a 344-yard drive, he nearly flew his approach into the cup, leaving him a 14-foot putt that he dropped over the front lip to share the lead.

In the playoff, Rose found trouble off the tee, pitched out and made bogey. Needing only two putts for the win, Garcia coolly poured in the winning putt.

“We couldn’t ask for anything more than winning the Masters,” said Garcia’s father, Victor. “It’s the best thing ever!”

When the final putt dropped, when the major weight was lifted, Garcia looked in disbelief at his caddie, Glen Murray, and then held him tight. He blew kisses to the crowd. The patrons chanted his name.

About 100 yards away, in the packed clubhouse grill, a shrill voice rang out.