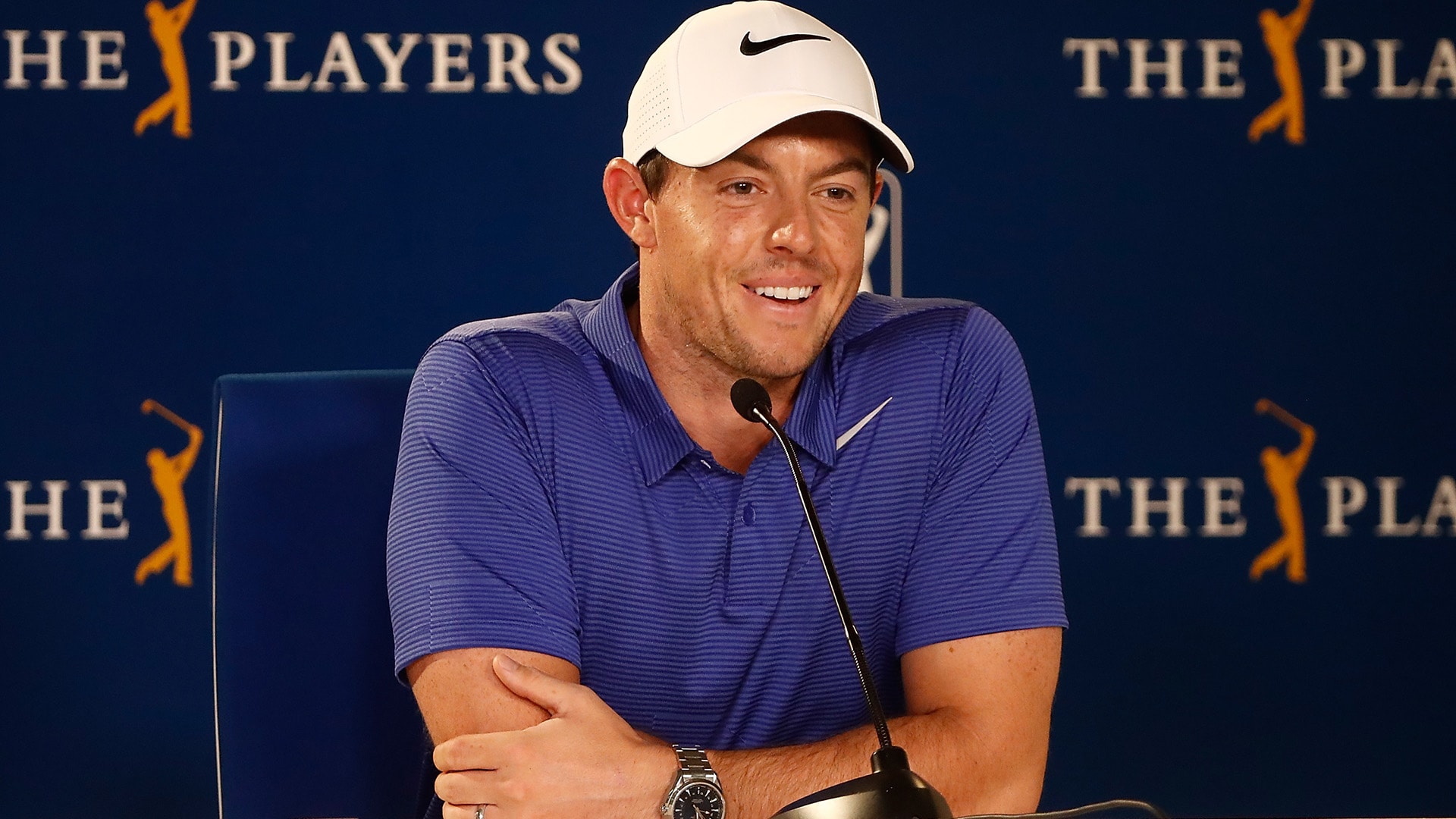 PONTE VEDRA BEACH, Fla. – Fidgeting with his wedding ring, discussing his new, long-term equipment deal, Rory McIlroy officially launched the next chapter of his career Tuesday at The Players.

He is making his first start since the Masters, since he tested even more clubs, since he got married to fiancée Erica Stoll, since he finalized the deal with TaylorMade, since he shed a few pounds from his honeymoon and since he ramped up his preparation for a return to competition.

A hectic April, to be sure, and yet …

“With everything that’s gone on the last few weeks,” he said, “it seems like everything is very settled. There’s not many question marks going on in my life right now. I feel like everything is exactly where it’s meant to be, and if you feel like that off the golf course, then I can only imagine that it will help you on it.”

McIlroy better hope for a wedding bump, because his main competition is pulling away. On a tear since last year’s U.S. Open, Dustin Johnson has opened up a nearly five-point lead in the world rankings – over the past two decades, only Tiger Woods has enjoyed such a massive advantage.

“I can’t see him falling off or dropping off,” McIlroy said, “so it’s up to the other guys to try and catch him.”

Since DJ’s considerable shadow has obscured the rest of the Tour, it seems like eons ago that McIlroy last won. But since the Tour Championship, he has played only seven events – Johnson has 10 starts during that span – his progress derailed by an early-season rib injury. Since returning in March, he has finished seventh or better in all three stroke-play events, including at the Masters.

After falling short at Augusta, again, McIlroy suggested that he needed to make some changes with his game. That included a closer look at his equipment, and so he tested clubs for 10 days before being blown away by TaylorMade’s offerings, specifically its new ball, the TP5x.

Said McIlroy: “I thought, Wow, this is what I need. This is exactly the thing that I’ve been struggling with.”

Everything else fell into place, and McIlroy, after hinting at an equipment change in an Instagram post on Monday, announced the lucrative, full-bag deal on Tuesday.

It’s a calculated risk, of course, switching out the entire bag. If he had enough rounds to qualify, McIlroy would rank first on Tour in strokes gained-tee to green.

“But I came to the conclusion that this was the best way forward for me to try and improve, try and win more, try to get back to world No. 1, try to win more majors, so I’m really excited about that,” McIlroy said. “It’s very rare that you get really excited about your equipment, but I feel like it’s a new chapter in my life, and it’s hopefully going to take me to the next level.”

That new chapter also includes his new life off the course. He married Stoll on April 22 at Ashford Castle in Ireland, a lavish wedding that included Masters champion Sergio Garcia and pop star Niall Horan and soul singer Stevie Wonder.

No, McIlroy isn’t the only Tour player to get married this year – Valspar winner Adam Hadwin tied the knot in March – but he is the most famous. And just like every newly married man, he expects a learning curve as he adjusts to a different level of contentment.

“This game is what I’ve wanted to do my whole life, so I’ll always be determined, I’ll always be intense and try to get the most out of my game,” he said. “I don’t think that will change just because I’m married or not. My mentality on the golf course will just be the same. It might help me get over tough losses a little bit easier, but I don’t know – I’ll have to tell you what that time comes.”

But McIlroy isn’t completely settled – at least not yet.

The Northern Irishman is not a full-time resident in the States, so he can spend only 120 days in the U.S. and 90 in the United Kingdom. Now that he’s married to a U.S. citizen, however, he can establish a permanent residence here beginning on Jan. 1.

And settling down can have a significant benefit, right?

“Just being centered,” he said. “Now you know what you can go back to and what you have.”

And what McIlroy has is seemingly everything – an awe-inspiring golf game, a beautiful wife, a support system with family and friends, an abundance of riches.

What comes next, what he achieves, is entirely up to him.

“I’m in a great place in my life and I feel very settled and very lucky to be in this position,” he said. “Now it’s just about trying to make the most of the good fortune that I’ve had.”