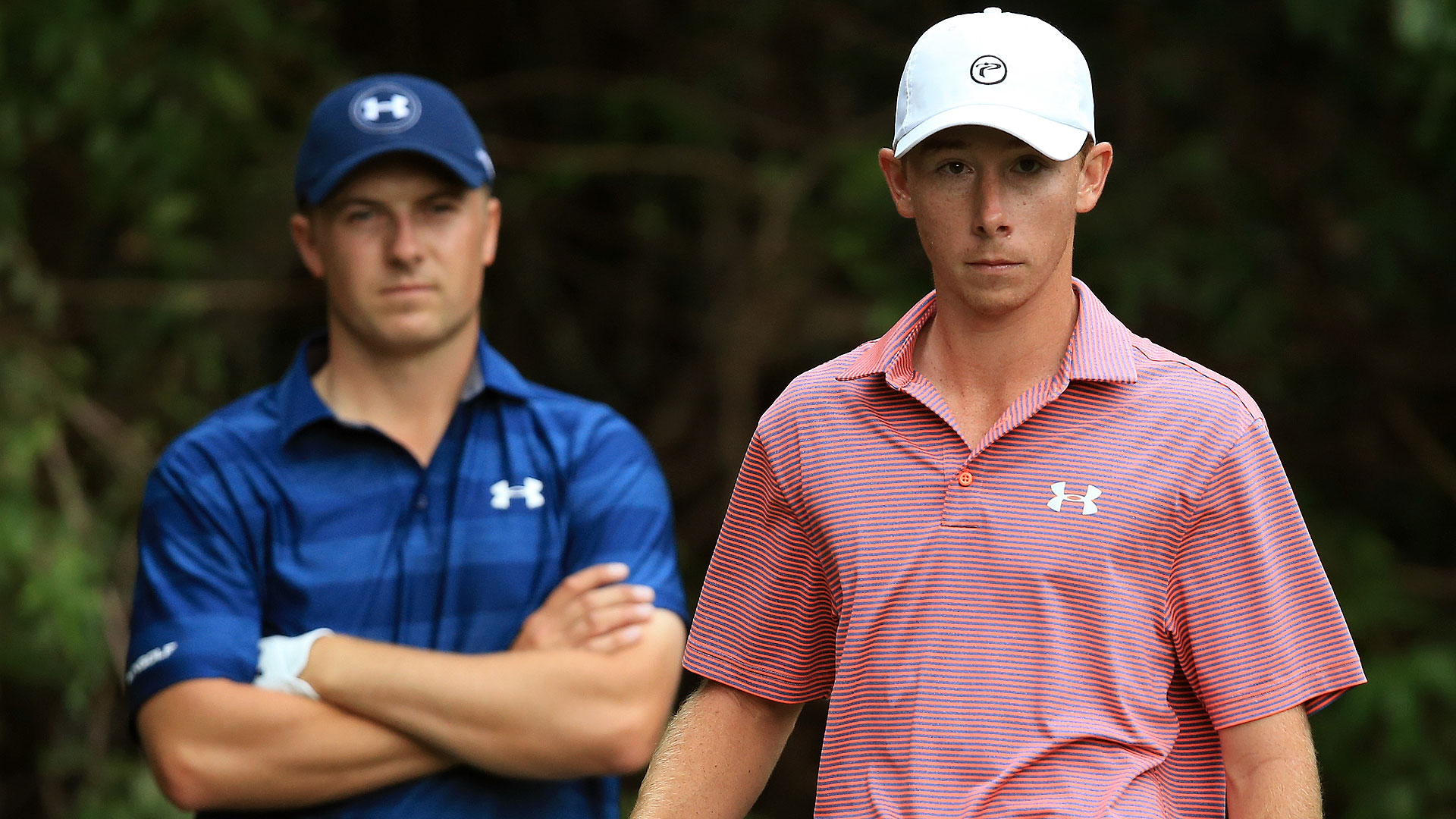 PALM HARBOR, Fla. – In the scoring trailer, there is a prize-money chart so players can see how much will be deposited into their bank account Monday morning.

After signing their cards, Jordan Spieth turned to amateur Lee McCoy and told him not to look at the chart.

“I looked,” McCoy said, pausing for effect. “I shouldn’t have looked.”

The 22-year-old University of Georgia senior can’t collect that six-figure check, of course, until he joins the play-for-pay set. A shame, too, because McCoy says he has about $350 in his bank account, enough for gas and some grub on the 7 1/2-hour drive back to Athens, Ga. McCoy has lived in the same cheap one-bedroom apartment for the past three years. He will turn pro in a few months, most likely after the NCAAs in early June, so his star-making performance here at the Valspar Championship couldn’t have been timed better with the Big Jump upcoming.

“You better believe I’m going to be getting into some people’s ears and make sure everybody knows what happened this week,” he said.

McCoy is talking about sponsors and equipment representatives, the potential signing bonuses and bidding wars. He hopes his play this week, and on Sunday in particular, will help boost his marketing appeal.

How could it not? Playing about a par 5 away from his childhood home, McCoy closed with a 2-under 69, dusted world No. 1 Spieth by four shots and finished fourth in his fourth career PGA Tour start, just three shots out of the playoff eventually won by Charl Schwartzel.

It was the best finish by an amateur in a non-opposite-field event since Justin Rose at the 1998 Open Championship (T-4).

“I would say that being able to put on my résumé that I contended in a PGA Tour event is my absolute biggest accolade,” McCoy said. “At the end of the day, that’s what companies want is their logo on TV. I don’t know how much coverage I got …”

Every shot on every hole, he was told.

“I hope people were watching and I’ll be able to live a little more comfortably,” he said. “I’m trying to move down to Jupiter (Florida) and rent’s not cheap. If I can get a deal boosted up a little bit and not live in a dump, that would be awesome.”

McCoy is the 10th-ranked college golfer in the country, one of the rare seniors who has actually performed well in his final year at school. For a player like McCoy who has already appeared in the big leagues – he made three Tour starts last season, including in the U.S. Open – the pro game can’t arrive soon enough. He is reminded of that promising future on a weekly basis, with the distractions of trying to line up sponsorships and representation and playing opportunities once he turns pro.

Though McCoy technically wasn’t playing for money Sunday at Innisbrook, well, in many ways he still was: The better he played, the higher he’d rise on the unofficial priority ranking for new pros, the more money in his pocket.

That’s why McCoy was openly rooting for a final-round pairing with Spieth on Sunday. More publicity, more pressure, more opportunity. On Saturday afternoon, after a 66, he watched the leaderboard on his phone “like a hawk” and secured the 1:10 p.m. tee time when one of the contenders made a late bogey.

“He was pumped out of his mind,” said McCoy’s father, Terry.

Spieth and McCoy hadn’t played together since September 2012, at The Farm in Georgia. Spieth tied for second that week, while McCoy was eighth.

Their career paths diverged from there.

After helping Texas capture the NCAA title the previous spring, Spieth turned pro a few months later. McCoy’s rise has been more gradual, from a consistent All-American performer to a Walker Cupper and four-time winner a year ago, when he set a school record for low scoring average.

“I wanted to play with him so bad,” McCoy said. “He’s the No. 1 player in the world, and not only do I know him and know that he’s an awesome guy to play with, but getting used to a crowd like that was such a great experience for me, to see what that was like. There are people moving everywhere. There’s nothing still about playing with a Jordan Spieth-type of crowd.”

Yet it didn’t faze him. He birdied his first two holes. He made bogeys on the sixth and ninth holes, after poor shots around the green, but his favorite moment of the week came on the par-4 12th. There is a lively Hooters hospitality tent to the right of the green, and the whole place erupted when his 30-foot birdie putt dropped.

Spieth walked up to McCoy on the next tee and draped an arm around his shoulder.

“Isn’t that the coolest sound in the whole world?” Spieth asked.

He two-putted for another birdie on 14 to move within two shots of the lead, then missed reasonable chances on the last four holes – all inside 30 feet – that could have made the final hour really interesting.

Perhaps the best part? He impressed Spieth, who began clapping as he approached McCoy on the 18th green.

“You would have thought he was out here for years,” Spieth said. “The way he was talking, you couldn’t sense any nerves or anything on his putting stroke, either. He’s certainly really ready to be out here. It was really fun to watch.”

And so now it’s back to reality, back to Athens, back to same one-bedroom apartment that he’s lived in for the past three years.

After making the media rounds and signing for about 50 autograph seekers, McCoy headed north with his girlfriend and a longtime family friend. It was a long trip ahead and he hoped to sleep for a few hours. He has an 9:42 a.m. tee time Monday, for the Bulldogs’ home tournament, the one-day, 36-hole Southern Intercollegiate, and they need their No. 1 player.

“I came back to school for a reason,” he said. “I’m playing good golf so I want to try to help our team defend our title.”

For a few more months at least, the pro game – and those big checks – can wait.