Mickelson has 'secret' to help him win first Open 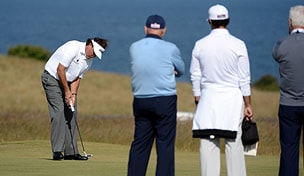 GULLANE, Scotland – Phil Mickelson’s admittedly rocky relationship with links golf began to change for the better in 2004. That’s when he and short-game guru Dave Pelz traveled overseas and began experimenting, though not with high flops, bump and runs, and sand shots.

No, their goal was to get Lefty’s tee shots on the ground quicker. Too often he fought the thick, heavy air. Too often a foul ball deep into the fescue doomed his chances at the British Open.

So they worked on long “chip” shots – chip 4-woods, chip hybrids, chip 4-irons. He swung with half the ferocity and took off the spin, hitting a low, scooting shot that, in theory, would keep him in play more often.

That year he finished third at Royal Troon, easily his best Open result at the time, but he hasn’t enjoyed sustained success. The exception was two years ago at Royal St. George’s, where blustery conditions late in the final round derailed his promising start, eventually resulting in a tie for second. Last year, he missed his second cut in the past five years.

In all, Mickelson has only a pair of top-10s in 17 career starts, by far his worst record in any of the four majors. He has finished only four British Opens under par. And he has only 14 of 62 rounds in the 60s.

“It’s a hate-love,” he said Tuesday of his relationship with the Open. “I used to hate it and now I love it.”

Never, however, has Lefty been more enamored with this championship.

Why the renewed confidence?

• Most obviously, his recent form: In his last three starts, he has a T-2 at the U.S. Open (where he led on the back nine Sunday) and a victory last week at the Scottish Open, his first title in Europe in 20 years.

• His chip shot off the tee, which he can rely on if the weather here turns nasty. Mickelson isn’t even carrying a driver this week, opting instead for a fifth wedge, the 64-degree.

• And his putting stroke, which he says is as good as it has ever been.

His putting, in particular, is the main culprit for his poor Open record, he says. From the subtle bumps and mounds to the crosswinds to the fescue grass, the green complexes have made one of the all-time short-game wizards look so ordinary, so often.

“I finally believe I have found the secret to my own putting and what I need to do to putt well,” he said. “Every single day now for the last year it’s been the same thing, and I’ve been putting really well.”

Mickelson wouldn’t disclose that putting secret, saying only that he has “keyed in something, and I don’t really want to share.”

This much was clear, however: Anything less than a shot at the claret jug would be a massive disappointment.

Heck, even the betting public finally believes in Lefty at the Open – as of Tuesday night he was a 20-1 favorite, second only to Tiger Woods (10-1).

Perhaps they, too, believe in the new adaptable Phil – the chip drives, the improved putting, the reluctant appreciation of links golf.

Whatever the case, Mickelson himself said that a victory here would be one of the defining moments of his Hall of Fame career, and not just because he’s coming off another heartbreaking U.S. Open. No, it’s because the potential feat required him to adapt his game, to hit the necessary shots, to become more of an all-around player.

“These last few months I’ve played well enough to get in contention and play well here,” he said, “but I do need some luck.”

Smitten at last with links golf, it remains to be seen whether Lefty’s love is requited.