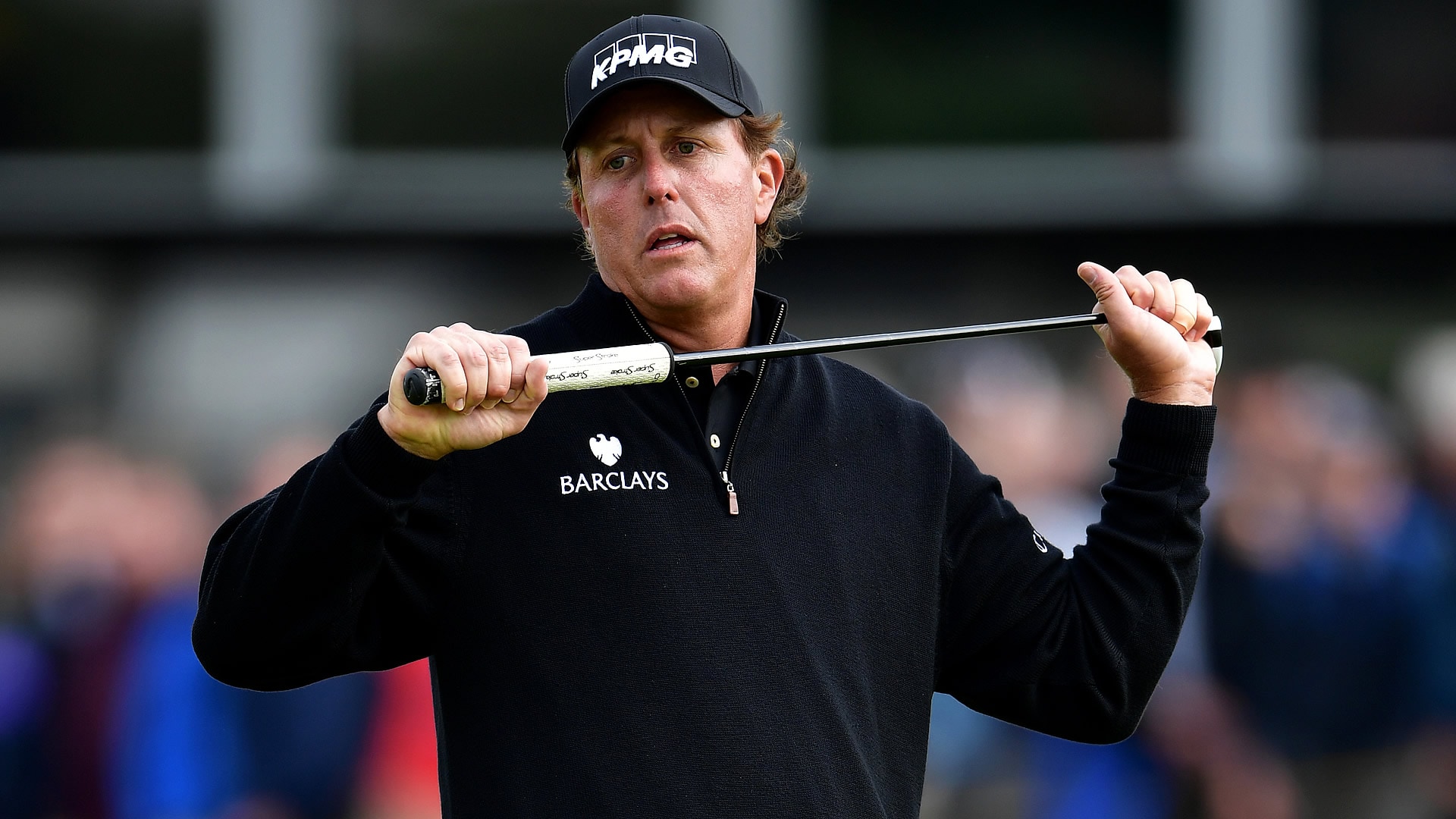 TROON, Scotland – Even for a man accustomed to major-championship heartbreak, Phil Mickelson had no idea how to digest this loss Sunday at the 145th Open.

It wasn’t the 2012 Masters, where he clanked a tee shot off a grandstand in the final round.

It wasn’t the 2013 U.S. Open, where he misjudged two wedge shots late on the back nine.

This was … maybe even more dispiriting?

“It’s probably the best I’ve played and not won,” he said.

Vying to become the oldest Open winner since 1867, the 46-year-old Hall of Famer shot a bogey-free 65 Sunday, tied the second-lowest score in a major by a non-winner (267) and carded the lowest final-round score of his career. He found fairways with ease and saved par from the heather and made only four bogeys all week at Royal Troon.

And yet he still lost. By three.

“I’m not sure how I’m going to feel about that,” he said. “I’m proud of the way I played. I played what I feel was well enough to win this championship by a number of strokes, and yet I got beat by three strokes.

“It’s not like I have decades of opportunities left to win majors, so each one means a lot to me. And I put in my best performance today. Played close to flawless golf and was beat.”

And so here comes another test of his legendary resilience. Throughout his 25-year career, no one has learned how to deal with failure better than Mickelson. His 11 runners-up in majors are the second-most all time, behind only Jack Nicklaus (19). The narrow defeats, many of them self-inflicted, are a significant part of Lefty’s legacy, as much as his five majors or his 42 PGA Tour titles.

After the most crushing loss of his career at Merion, after it finally appeared that he was damaged goods, Mickelson summoned arguably his greatest performance just a month later, a flawless Sunday 66 to capture the Muirfield Open. In the aftermath, he raved about how he was playing the best golf of his life, at age 43.

That didn’t pan out, of course, and his game deteriorated over the past few years. After recording at least six top-10s in 16 consecutive seasons, and 10 in a row with a victory, he has mustered only four top-10s the last two seasons combined. His world ranking tumbled outside the top 30.

During the offseason, he made the difficult decision to leave legendary swing coach Butch Harmon, with whom he’d enjoyed the most success, in favor of little-known Andrew Getson, who helped put Mickelson’s long, free-flowing swing back on plane. “It’s taken him a fair amount of time to play golf instead of swing,” said Mickelson’s longtime short-game coach, Dave Pelz, “but he looks great now.”

Never better than at Royal Troon, where Mickelson came within a fraction of an inch, or a pebble, from shooting the first 62 in a major. A day later, in pounding rain, he grabbed his first 36-hole lead in a major in three years. And even when his swing abandoned him during a blustery third round, he turned a 77 into a 70 with his magical short game.

Caddie Jim “Bones” Mackay reported that Mickelson’s warmup Sunday was “incredible,” similar to Muirfield in 2013, and then Mickelson put on a ball-striking clinic for four unforgettable hours.

Unfortunately for him, so did Stenson. They matched birdies, opening 32s and swapped the lead five times on the front nine. Mickelson climbed back into the lead on 11 and scrambled to an all-world par on 12, but Stenson, better known for his ball-striking prowess than his putter, caught fire coming home. An 18-footer for birdie on 14. A 50-footer on 15.

It appeared that he might pull even on the par-5 16th, but his 25-foot eagle putt took a peek at the cup and dove left at the final moment. “I really thought that was going to go in,” he said.

Stenson poured it on with a birdie of his own on 16, a macho long iron to 8 feet on 17 and then an exclamation point on the last to shoot a two-bogey 63 and set the major aggregate scoring record of 20-under 264.

Mickelson’s four-round total of 267 would have won or forced a playoff in 141 of the 145 Opens played. So superb was his golf, he was 11 shots clear of the third-place finisher, J.B. Holmes.

“We’ll never see perfection on a links like that ever again in our lives,” said Nick Faldo, a three-time Open champion. “There’s no way. For them to match each other, it was links perfection. I’ve never seen anything like that.”

That’s little solace to Mickelson, of course. Though players are staying competitive longer – a combination of better technology, better equipment and better fitness – it’s reasonable to wonder how many more chances he’ll have to add to his collection of five major titles.

“The only good thing is he didn’t lose it,” Faldo said. “You’re going to lose majors, but Phil will say that I did everything I could, I was just faced against a man who outscored me at the end.

“There’s no discrediting that at all. You won’t be scarred by that loss. Sure, you’ll look back at the bits and bobs, but one man won it, the other man didn’t lose it.”

Said Mackay: “That’s as good of a tournament as I’ve seen him play, if ever.”

Mickelson looked dazed when he emerged from the Recorders’ Office, two Ziploc bags full of snacks in his right hand. He smiled his way through a trophy presentation, praised Stenson and answered 15 questions during a packed news conference. Still, he labored to find the right words, to come to grips with how he could play so well and lose.

“Do you now finally know how Jack Nicklaus felt in ’77?” a reporter asked, alluding to the famed Duel in the Sun at Turnberry, where Tom Watson (65) nipped Nicklaus (66) on the final day in one of the game’s greatest head-to-head clashes.

“I understand how it feels,” Mickelson replied. “It’s bittersweet.”

Afterward, Mickelson, flanked by his longtime manager, Steve Loy, made a beeline for his room at The Marine Hotel, which overlooks Troon’s 18th fairway. He signed yellow replica flags for teenaged volunteers decked out in the R&A’s blue rain suits. He breezed past the hubbub on the front lawn of the clubhouse, where Andrew “Beef” Johnston, wearing a Scottish cap, was taking swigs from a Heineken and posing for pictures. He walked all the way to the far end of the player parking lot and onto Crosby Street, past two unsuspecting fans. And, never breaking stride, he climbed over a short rock wall and sped toward the back entrance of the hotel, despite the “No Entry” sign printed on the window.

Slapping Loy on the back, Mickelson stepped inside, the beginning of what figured to be a restless night. Another major week was only eight days away.