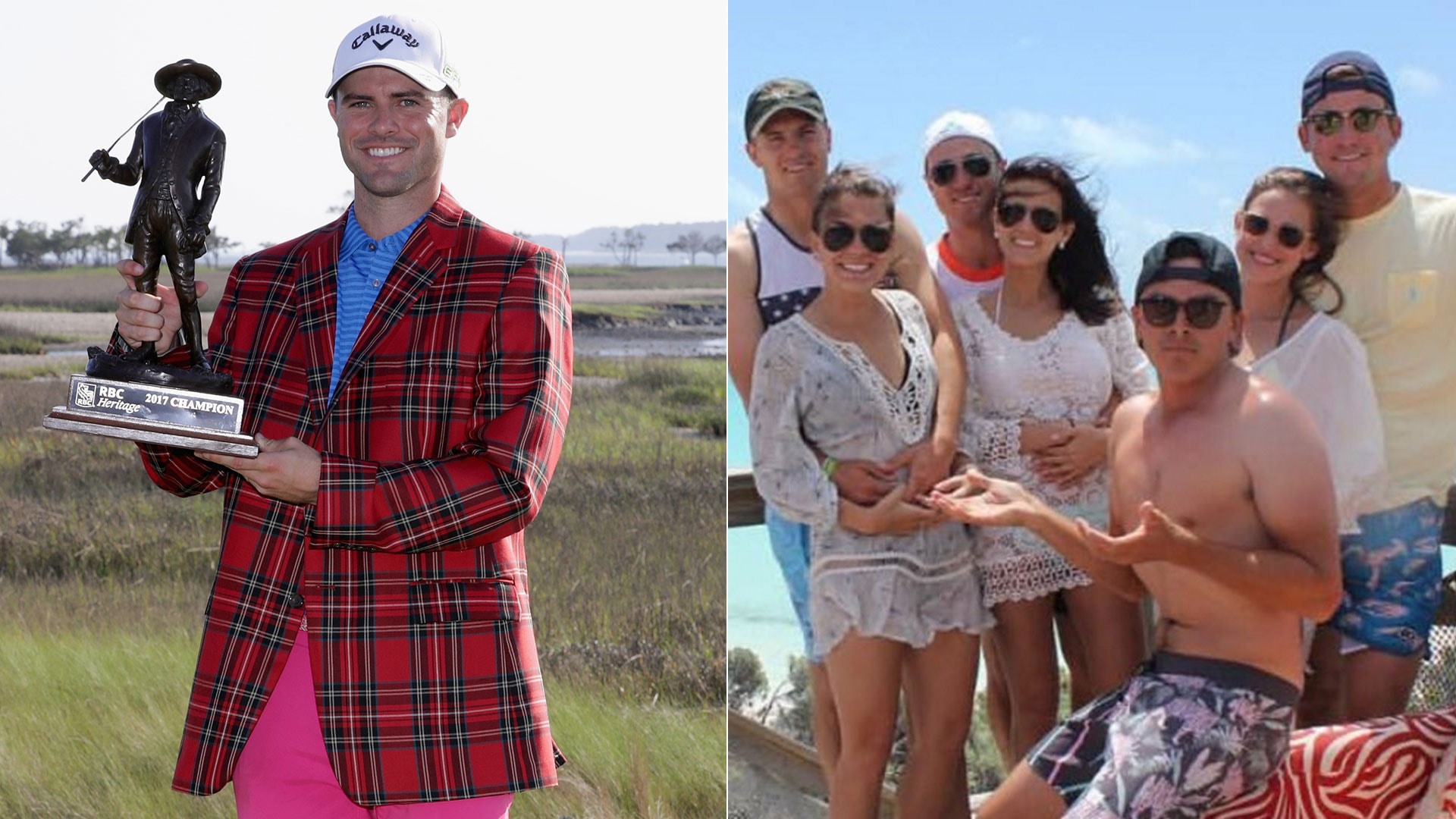 Wesley Bryan wins in his home state, Ian Poulter has a make-or-break week, Lydia Ko fires another caddie, the bros hit the Bahamas and more in this week's edition of the Monday Scramble:

Bryan’s life story is a movie waiting to be made – his improbable rise from struggling mini-tour player, to popular trick-shot artist with millions of YouTube hits, to dominant Web.com Tour Player of the Year, and now to PGA Tour winner, after his hard-fought victory at the RBC Heritage.

There were no tricks to his win Sunday, closing with a 4-under 67 to erase a four-shot deficit entering the final round.

It’s a life-changing title for the 27-year-old, who now has earned his way into all of the big events, including next year’s Masters – the rarest of home games for the current Augusta, Ga., resident.

Bryan went to the Masters this past year, eating pimento cheese and egg salad sandwiches, and following one of his pals, Russell Henley, during the opening round.

“I can call it my home golf course for the next 51 weeks,” he said.

Just another chapter in his incredible journey. 1. The Web.com circuit is often marketed as the gateway to the PGA Tour, but not often is it such a direct route to the winner’s circle.

In fact, Bryan became just the third reigning Web.com Player of the Year to win the following season on Tour.

2. Is there a worse spot than the 54-hole leader at Hilton Head?

The last six winners there all have come from behind – by three or more shots, too. It’s the only Tour event to hold that distinction.

When asked to explain how his life has flipped upside down over the past 15 months, he said: “I don’t know. Will Ferrell said it best: ‘That escalated quickly.’ Honestly, I’ve got no idea. It’s still kind of surreal.”

4. Sure, Luke Donald needed a good finish, regardless of the tournament. But at some point it has to be frustrating to come so close, so often to winning at Harbour Town.

The Englishman shot 68 in the final round to finish second there for the fifth time. It was his record seventh top-3 overall.

And he's still looking for his first win there.

“I just keep trying,” he said. “Obviously it’s a place I feel comfortable and I like and I’ve had a lot of success. I’ve got to just keep pounding away, and hopefully I’ll get there.” 5. Ian Poulter was one of the most animated players on the course Sunday, and he had no chance to win. That’s because he was fighting for his card.

Last week at Hilton Head and this week in San Antonio, he needed to earn $144,669 or 117.75 FedEx Cup points to satisfy the requirements of his major medical extension.

He came up about $30,000 shy, which means he’ll need to make the cut – and make up the difference – this week at TPC San Antonio, which is one of the hardest courses on Tour. He tied for 37th in his only appearance there, in 2013.

“I’m a little hot under the collar right now,” he said. “I’m not disappointed I didn’t get the job done today in terms of finishing where I need to finish, but that today could have been a victory and I let it slip.”

Poulter shot 73 and finished five back.

6. What was it that sent Jason Dufner reeling at the Heritage?

No doubt, his putter was the biggest culprit – no one was worse Sunday, as he lost a whopping 3.59 strokes to the field on the greens, took 34 swipes and sank only 35 feet worth of putts.

Dufner tumbled from the 54-hole lead to a tie for 11th.

Others would argue it was karma. Video surfaced of Dufner, after making bogey on the fifth hole, rudely dropping his putter by the hole that his caddie was forced to scoop up. He got skewered on social media, and he went 5 over for his next 10 holes. Coincidence, we think not.

7. One of the few things that didn’t go right for Paul Dunne last week at the European Tour’s Trophe Hassan II was the arrival of his luggage. It didn't make it until Saturday night.

That led Dunne to go shopping in Rabat.

“I have to apologize to my sponsors,” he said, “that I’m wearing random clothes which I bought in a shop because I lost my suitcase and it’s being found as we speak. I’ve had none of my own clothes this week; I had to buy them in the shops.”

Dunne, who played college golf at Alabama-Birmingham, rose to fame at the 2015 Open at St. Andrews, where he shared the 54-hole lead, the first amateur in that spot since 1927.

Dunne hadn’t enjoyed much pro success (just two top-10s) until traveling to Morocco. He lost the playoff to Edoardo Molinari, after the Italian birdied 17, made eagle on 18 and then won the title with a par on the first extra hole. It was Molinari's first Euro Tour victory in seven years.

8. The Zurich Classic won’t offer world-ranking points this year, but that hasn’t deterred some of the world’s best from teeing it up in what should be a fun format.

Switching this year to a two-man team competition that will feature both foursomes and fourball matches – the first on Tour since 1981 – has brought together seven of the top 10 players in the world.

The latest to commit was Jordan Spieth, who will partner with fellow Texan and close friend Ryan Palmer. Some of the other teams include: Jason Day-Rickie Fowler, Justin Rose-Henrik Stenson, Justin Thomas-Bud Cauley, Bubba Watson-J.B. Holmes, Patrick Reed-Patrick Cantlay and Daniel Berger-Thomas Pieters.

The novelty may wear off after a year or two, but it just goes to show how today’s players appreciate outside-the-box thinking, even without world-ranking points on offer. 9. Cristie Kerr played her last 52 holes without a bogey to overtake leader Su-Yeon Jang and capture the Lotte Championship.

It is the second victory of the year for the Americans (Brittany Lincicome, Pure Silk Bahamas). That matched their output from all of last year.

10. In danger of losing her world No. 1 ranking, Lydia Ko responded by finishing in a tie for second in Hawaii. It was her best finish of the season.

So Yeon Ryu could have overtaken Ko with a victory and if Ko finished fifth or worse.

Though she held on to the top ranking for at least the next two weeks, Ko is in the midst of a 16-event winless drought, the longest of her career.

In 16 starts since the Women’s British, she has only seven top-10s; No. 3 Ariya Jutanugarn, meanwhile, has 14 top-10s in 18 appearances during that span.

11. And perhaps that was enough to lead Ko to make more changes. After the Lotte, she fired another caddie, this time Gary Matthews, after only nine events. She has developed a rather unflattering reputation ... While the #SB2K17 crew reconvened in Baker’s Bay for another week of sun and fun, all your trusty correspondent did last week was drive seven hours home from Augusta, Ga.; head to the doctor for a yearly checkup; complete a few hours of yard work; wait five hours for a plumber; and then clean the entire house before and after Easter brunch. Still Some Beef: Sergio Garcia and Padraig Harrington. It was interesting to see how Sergio was depicted – first as the ultimate sportsman after his thrilling playoff victory at Augusta, then as the petulant “sore loser” that Harrington saw a decade earlier. Garcia's transformation has been remarkable – and much-needed.

Hit It Hard: Ollie Schniederjans. The hatless wonder had another chance to win Sunday, and it appears his go-to shot under pressure is to hit it hard. Really hard. On the last two holes, he smoked a pitching wedge 180 and 184 yards. Unfortunately for him, he needed more club on 17, with his tee shot expiring in the bunker short and leading to a bogey.

Golf Quote of the Year: Bryan, describing what it felt like once he got to the 17th tee with the lead: “Honestly, I just threw up a little bit in my mouth. And I was like, Shoot, I guess this is what nervous feels like.”

Undecided: Maverick McNealy. The world No. 1 amateur and newly named Hogan Award winner – given to the graduating senior who excels on and off the course – said last week that he is still no closer to making a decision on whether to turn pro or remain an amateur after college. The guess here is that he’ll give the pro ranks a try, if only to see how good he can be, but the next few months will be telling. He'll remain an amateur at least through the Walker Cup in September. All Good Things …: Bernhard Langer. His second-round 73 Saturday at TPC Sugarloaf snapped his record streak of 36 consecutive rounds of par or better on the PGA Tour Champions. Fittingly, he bounced back the next day with a 65, the best round of the day, to finish second. Because of course he did.

Four Weeks Too Late: Dustin Johnson. The world No. 1, who withdrew from the Masters after a freak back injury, committed to return at the Wells Fargo in early May. He’ll be looking for his fourth consecutive victory.

Good Advice for Next Time: John Peterson. Note to self: Take a week off after a bender.

It's best to not do a 3 day bender in Vegas right before a PGA tour event. Just for the 3 of you wondering. #trunkslam

No Need To Tell Us About …: Your round at Augusta. Unless it leads to a larger discussion, like this, there is no need for media members to offer a blow-by-blow of their embarrassing 100-plus score the day after the Masters.

When You Have Your Own Spring Break Getaway: Gary Player. Well done, sir.

Blown Fantasy Pick of the Week: Jim Furyk. He owns one of the best records at Harbour Town, and he appeared in good shape after an opening 68. Then he inexplicably sank to a 74 in easy morning conditions to miss the cut by a shot. Sigh.