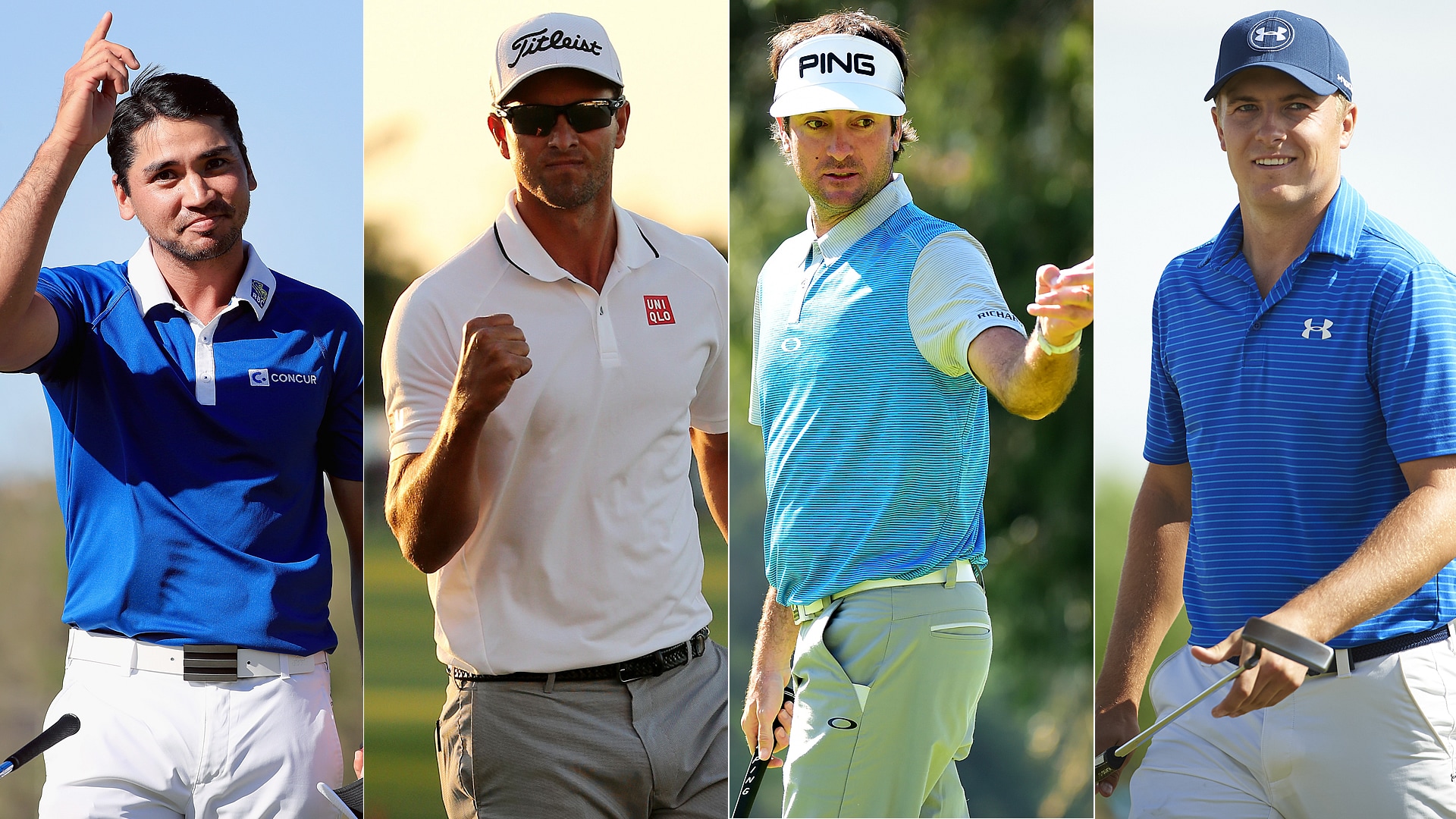 The Masters is always the most anticipated major, for a few reasons:

It’s the tournament most players most want to win. It’s the inherent beauty and mystique of Augusta National. And it’s the Masters’ place on the calendar – eight months have passed since the last major championship, and every event since has felt like a referendum on the list of favorites.

But this year feels a bit different, no?

Fourteen PGA Tour events have been played in 2016. Eight have been won by major champions, and four former Masters winners have already won a title this year. It's why the Masters field is so small – almost all of the top players are snatching up titles (and, by extension, the automatic invitations).

The point here is that this Masters has all the makings of an instant classic, of one of the most memorable majors in the past two decades. Too many great players are in form for there to be a rout, a dud winner, a lack of drama on the back nine.

Or so we hope.

1. Here are one man’s top 10 favorites for the Masters. Adjust your pre-draft rankings accordingly:

2. Tip of the cap to journeyman Jim Herman, who shared the 54-hole lead at the Houston Open, chipped in on the 70th hole and broke through on Tour for the first time in 106 starts. He gave a teary interview afterward and didn't express any regrets about missing his 8:42 p.m. flight back to Fort Lauderdale.

He was heading to Augusta instead.

3. A decade ago, Herman was working as an assistant pro at Trump Bedminster in New Jersey when he played a round with a billionaire named Donald Trump. Impressed, Trump wrote Herman a check to help fund his floundering career.

After failing at Q-School, toiling on the mini-tours and then graduating from the Web.com Tour a whopping four times, Herman is now a Tour winner.

“I feel awfully good,” Trump told USA Today on Sunday night. “It was really nice to see him win. He’s such a good guy. A nice person. And he deserves it. Such a great story. He’s what America is all about. He never gave up, never gave up on his dream. I’m proud of him.”

4. Does a high finish in Houston augur a great week in Augusta? Well, it has recently for a few top players:

But no player has ever won the Houston Open and Masters in back-to-back weeks.

Still, there were a few meaningful takeaways from Houston, such as ...

5. Spieth got himself into contention Sunday, but he chastised himself for rinsing eight (!) shots during the week.

6. Mickelson made a number of mistakes as well, especially off the tee, but he shrugged off those miscues. His rationale made sense, too. At Augusta, only one tee shot brings a hazard into play (13), so players are swinging as hard as possible on every tee box. To prepare for the year's first major, Mickelson adopted a similarly aggressive approach at the Golf Club of Houston, which is far more penal, and as a result he took plenty of penalty drops.

7. Henrik Stenson came close. Again. Since his season-ending victory in Dubai in November 2014, the ball-striking savant has a remarkable 13 top-five finishes, including eight runner-up finishes.

8. DJ might be the least-talked-about player who has the best chance to win. After an opening loss at the Match Play, Johnson added the Houston Open while on the range warming up for his Thursday match, saying that he needed more reps. He reached the knockout stage, torched Patrick Reed with seven birdies and an eagle, and still got in two days of prep at Augusta before a solo third in H-Town. Trending.

9. Apparently, Daniel Berger’s left wrist is OK. The 22-year-old injured his wrist during the Match Play when he tried to play a shot next to a rock wall. He withdrew from his third-round match but bounced back with a tie for fifth in Houston.

Three weeks from her 19th birthday, she hit all of the clutch shots down the stretch at the ANA Inspiration – none more so than an 88-yard wedge to a foot on the final green, a kick-in birdie that put even more pressure on Ariya Jutanugarn. Read colleague Randall Mell's column here.

Ko is now the youngest two-time major winner, male or female, in the modern era. Her game has no weaknesses – and no limits.

11. The poise and control with which Ko closed out the year’s first major stood in stark contrast to Jutanugarn’s shaky finish.

Staked to a two-shot lead with three to play, she bogeyed the 16th hole, butchered the 17th and then snap-hooked her final tee shot into the water, leading to another dropped shot, her third in a row.

Jutanugarn was one of the best junior players I’ve ever covered, boy or girl, and she’s only now beginning to play her way back into shape after a debilitating back injury. But when you add in her collapse at the 2013 Honda Thailand, there’s already a lot of scar tissue for the uber-talented 20-year-old.

12. The World Golf Hall of Fame announced last week that it will raise the minimum age for induction from 40 to 50.

With players still highly competitive into their 40s, it only makes sense for the Hall to push back the enshrinements until they are Champions Tour eligible.

Most immediately, this new rule affects Tiger Woods, who turned 40 last December, but it’s a move that likely won’t upset him: It spares Woods the awkwardness of being celebrated for a career that isn’t yet over. Mickelson, for instance, won a major a year after his induction speech.

Of course he wasn’t going to play. Woods is (finally) listening to his doctors and seems determined not to rush what is his final comeback attempt. After all, golfers don’t return from four back surgeries.

So why the delay? Why wait to announce what seemed so obvious to so many?

Maybe Woods just wanted to toy with us. Perhaps he seriously thought he could play and the drive to prepare helped his rehab, until he eventually came to his senses.

Whatever the reason, it was odd, and it was unnecessary, and for the first time, few people seemed to notice. Or care.

Let's Hope This Doesn't Happen at Augusta: Bubba Watson's half-court shot. This is the halftime-entertainment equivalent of having a putt to win the Masters hang on the lip. Brutal.

Surely a Terrible Jinx: The weather forecast for the Masters. This could change at any moment, of course, but Masters week looks nearly perfect – a chance of rain Thursday morning, a steady 20-mph wind Friday, but temperatures will be anywhere from the mid-60s to the mid-70s. Glorious.

And Your NCAA Player of the Year Is …: Beau Hossler? The Texas junior moved another step closer to wrapping up top-player honors with a two-shot victory Sunday at the Augusta 3M Invitational. It is Hossler’s NCAA-leading fifth title this season – two more than any other player. Voting for the Haskins Award ends before the NCAA Championship, so Hossler has three more events to solidify his position.

Not Like Jack: Michelle Wie. Much was made of Wiesy’s new putting style – tabletop stance and also mimicking Nicklaus’ famous crouch – but it wasn’t a cure-all for her game. She still averaged 31 putts per round and, after a closing 77, tied for 36th. She hasn’t been better than 25th in seven starts this year.

Blown Fantasy Pick of the Week: Oosthuizen. Rounds of 73-77, on a course he loves, a week after a runner-up showing at the Match Play, a few days before the Masters? Sigh.