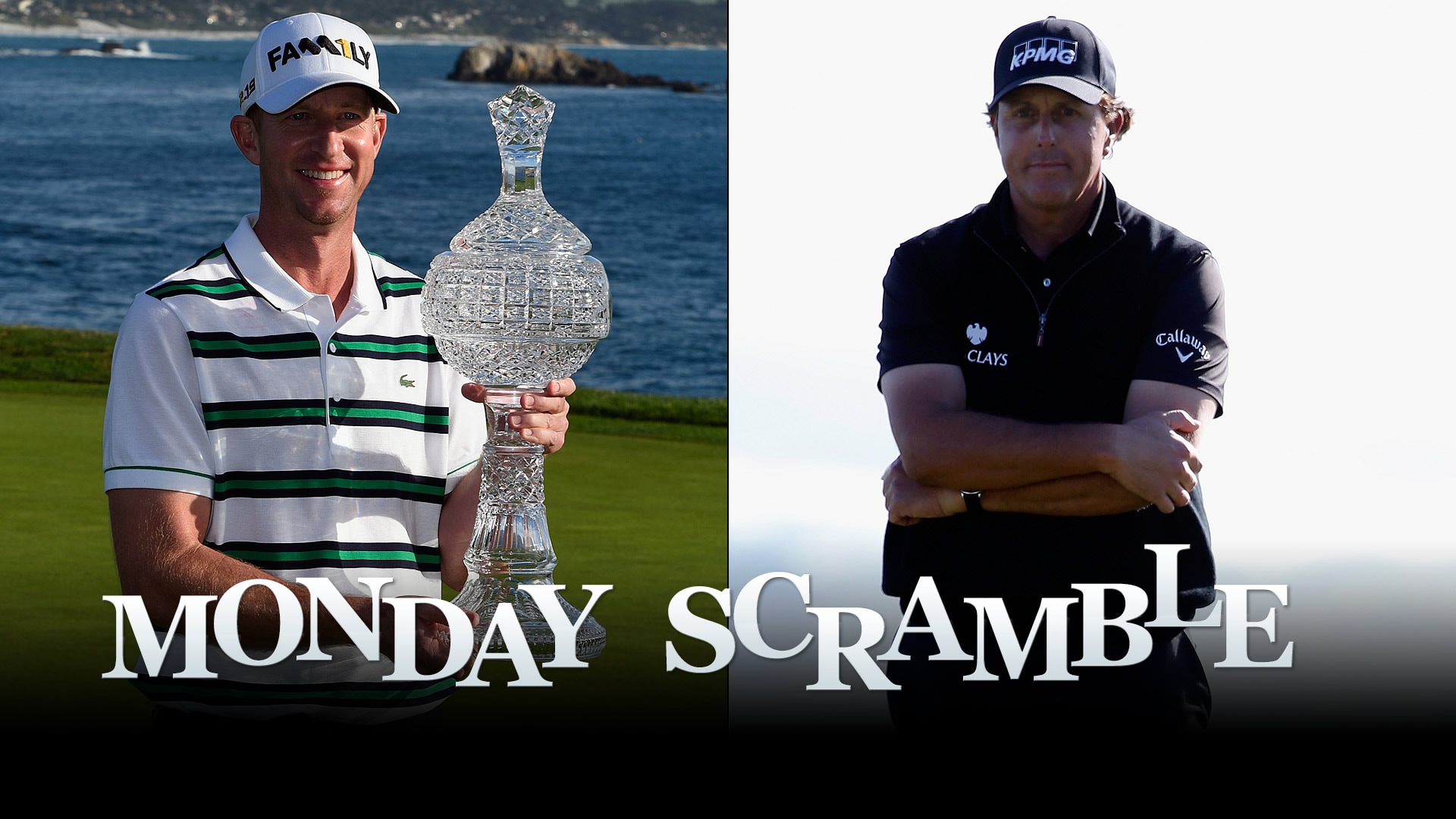 Vaughn Taylor climbs out of the career abyss, Phil Mickelson coughs up a 54-hole lead, Bernhard Langer wins without anchoring, "celebrities" steal the show and more in this week's edition of Monday Scramble:

Maybe this was too much, too soon for Mickelson.

It’s hard enough to compete when undergoing a swing change. The task is exponentially more difficult when putting a revamped swing under the gun for the first time while trying to snap a career-long winless drought.

In retrospect, Mickelson was doomed as soon as he flew in his swing coach, Andrew Getson, on the eve of the final round for an emergency session. It showed he didn't have enough confidence in his new swing to close the deal.

Really, it's a testament to his otherworldly short game that Phil even had a chance to win this AT&T Pebble Beach Pro-Am. He hit only nine greens each of the last two rounds, yet he still was only one 5-footer from forcing a playoff against journeyman Taylor. Had they gone head-to-head in overtime, the odds certainly would have been in Lefty's favor: Prior to Sunday, he had twice as many wins at Pebble (four) as Taylor had in his entire Tour career.

This loss likely will sting, if only for a few days, because the confirmation of his career revival now has to wait. With a cast of largely unproven players behind him, Mickelson squandered a two-shot lead and his best chance to win since that unlikely triumph at Muirfield in summer of 2013. But the big-picture takeaway here is this: Despite legitimate concerns about his age (45), his health (arthritis), his desire and his swing change, Phil is once again a factor. He might be mired in an 0-for-53 slump, but never has winning seemed more attainable.

1. Vaughn Taylor, a winner at Pebble Beach? We can't believe it, either. Among the many did-that-just-happen? nuggets:

And, yes, now, improbably, he’s back in the winner's circle, after beating the best field to date, with six of the top nine players in the world in attendance.

"Just absolutely amazing," he said. "I didn't know if it would ever happen again, to be honest."

2. The victory at Pebble secured Taylor a spot in his hometown event. Fortunately for him, that happens to be the Masters, which he hasn't played since 2008.

"Playing in the Masters is my Super Bowl," he said.

In three previous appearances at Augusta, he missed a pair of cuts and tied for 10th (2007). He is the first player this year to win and get in to the year's first major.

3. Taylor’s out-of-nowhere performance was a reminder that it just takes one week to change the fortunes of a PGA Tour journeyman. When Mickelson’s putt rimmed out, Leot Taylor sobbed uncontrollably while holding her 2-year-old son, Locklyn.

“There are so many ups and downs in this career,” Taylor’s wife told the San Diego Union-Tribune afterward. “And this goes to show you that you don’t count anyone out. Everybody can win out here, and I’m happy my guy won this week.”

4. You might recall that Taylor was a member of arguably the weakest U.S. Ryder Cup team ever assembled, in 2006, a squad that also featured Brett Wetterich, J.J. Henry and Chad Campbell. It's a wonder (miracle?) the Americans mustered 9 1/2 points while getting lapped at the K Club.

Well, how about this: Taylor now sits at No. 12 in the U.S. team standings.

He powered his 5-foot-1-inch putt through the break, caught the top lip and spun out.

“It never crossed my mind that I wouldn’t make that one,” he said.

6. The close call at Pebble Beach pushed Mickelson’s "near-miss total" to 58 – that’s how many runners-up and third-place finishes he has in 530 career events on Tour. He is nothing if not exciting.

How does that compare to the other great players in his generation?

7. It’s overshadowed by Woods’ insane rate, but Mickelson has been a reliable closer for much of his career: Prior to Sunday, he had gone on to win 18 of the 22 times that he held at least a share of the 54-hole lead.

Taylor became just the third player (Woods and David Toms) to beat Mickelson when the left-hander had at least a two-shot advantage.

Which is why Mickelson's final-round stumble served as a reminder of the difficulties that Woods will face when, or if, he returns to competition. It’s really hard to win on Tour these days.

For the better part of three rounds, Mickelson was nearly flawless with the putter on a course that he clearly enjoys a significant advantage as a four-time winner. But the Tour’s depth is such that he still was passed by a journeyman without status who shot 67 on Saturday and matched a career best with a 65 in the final round. For Phil, Tiger or any of the other members of the old guard to win, they have to be nearly perfect for four days, especially with the putter. And that’s a lot to ask.

8. Langer on Sunday won for the 26th time on the Champions circuit, but the first without anchoring.

For all of the consternation over how Adam Scott, Keegan Bradley and Webb Simpson would fare without their long wand, it was Langer, 58, who stood to lose the most.

But after a steady, unspectacular start to the PGA Tour Champions season – when he tinkered with three putting methods all the way up to his tee time – Langer seems to have found a solution: He moved his left hand ever so slightly away from his sternum and stroked the putt. His hand doesn’t appear to be more than an inch off his chest, and he keeps it anchored until the moment before he pulls the trigger (hopefully he doesn't have a senior moment), but he opened 62-66 and won the Chubb Classic by three. This method might not work as effectively in windy conditions, but for now it’s a relief that a shortsighted decision by golf’s governing bodies won’t end the career of one of the game's best seniors.

9. Lydia Ko only gets more impressive the more we learn about her. Yes, she now has 15 pro titles at the age of 18, but a week after she openly rooted for Ha Na Jang to win the LPGA event in Ocala, she donated her entire $33,000 first-place check from the New Zealand Open to help her home country. Special kid.

10. Jordan Spieth was relegated to an undercard Sunday at Pebble Beach. When’s the last time we could say that?

Spieth and Dustin Johnson – two pre-tournament favorites – finished on the ninth hole while the final groups were coming down the 18th at Pebble Beach.

After three frustrating rounds, the world No. 1 salvaged a T-21 finish following a closing 66. It represented his worst result, anywhere, since a missed cut over Labor Day weekend.

His biggest issue? He ranked near the bottom of the pack in proximity to the hole at Pebble, and he was “sloppy” with his play on the par 5s. Prior to Sunday (when he picked up two birdies), he played the longest holes in even par. Mickelson, by contrast, was 8 under on the par 5s.

11. The European Tour made good on its promise to call out violators of its new pace-of-play policy, announcing that Spieth, Daniel Brooks, Benjamin Hebert, Eddie Pepperell and Gavin Green each received monitoring penalties for taking longer than 40 seconds to play a shot once their group was deemed out of position.

The potential for a $2,800 fine isn’t the deterrent here; it’s the threat of being publicly shamed.

Bill Murray apparently can do no wrong on the course at Pebble Beach – after all, it was only a few years ago that he pulled an elderly woman from the stands, danced with her, flung her around in a bunker and wasn’t publicly reprimanded.

But the legendary comedian crossed a line off the course last week when he reportedly became so irritated with a group of selfie-seekers that he hurled their cellphones off a second-story balcony. (Murray has agreed to pay for the damages.)

He was probably just tired from six hours of entertaining, making him grumpy and susceptible to this Kanye-esque meltdown. Whatever the reason, if the 65-year-old flips out at a ritzy post-round party in Carmel, how does he handle the aggressive paparazzi at LAX?

News, notes and observations from the past week ...

• Sure, a win is a win, but it's hard to read too much into Charl Schwartzel’s latest European Tour victory, for two reasons: (1) It was an incredibly weak field, as he earned only five more world-ranking points than the winner of the Asian Tour’s Bashundhara Bangladesh Open, and (2) eight of his 11 career titles have come from November to February.

• There are plenty of stars this week in Hollywood: Spieth, Rory McIlroy, Bubba Watson, Johnson and Justin Rose are all in the field this week at Riviera. A proper end to the West Coast swing.

• Even though a judge surprisingly dismissed the caddies’ lawsuit against the PGA Tour, that the loopers’ treatment at Tour events is now being discussed is a sign of progress.

• Apparently, Patrick Reed’s ankle is OK. The injury, which led him to withdraw from Torrey Pines (and caused a tiff on social media, thanks to cranky Canadian Graham DeLaet) didn’t appear to affect Reed as he shot 65 Sunday and tied for sixth at Pebble Beach. It was his eighth top-10 in his last 10 worldwide starts.

• Ryder Cup vice captain Tiger Woods suggested that prospective team members take a fishing trip to get better to know each other, that it’ll only help them come fall. Or maybe Tiger is just bored.

• If you're keeping score at home: With his tie for 11th at Pebble Beach, Jason Day leapfrogged McIlroy and returned to No. 2 in the world.

• Give it up for Mike “Fluff” Cowan. All he did last week was fill in as caddie for Sung Kang, who came to his 18th hole Friday at Monterey Peninsula needing a birdie for 59. He settled for 60, denying Fluff an incredible feat: Looping for two players who shot 59. Cowan’s boss, Jim Furyk, who is recovering from wrist surgery, shot 59 at the 2013 BMW.