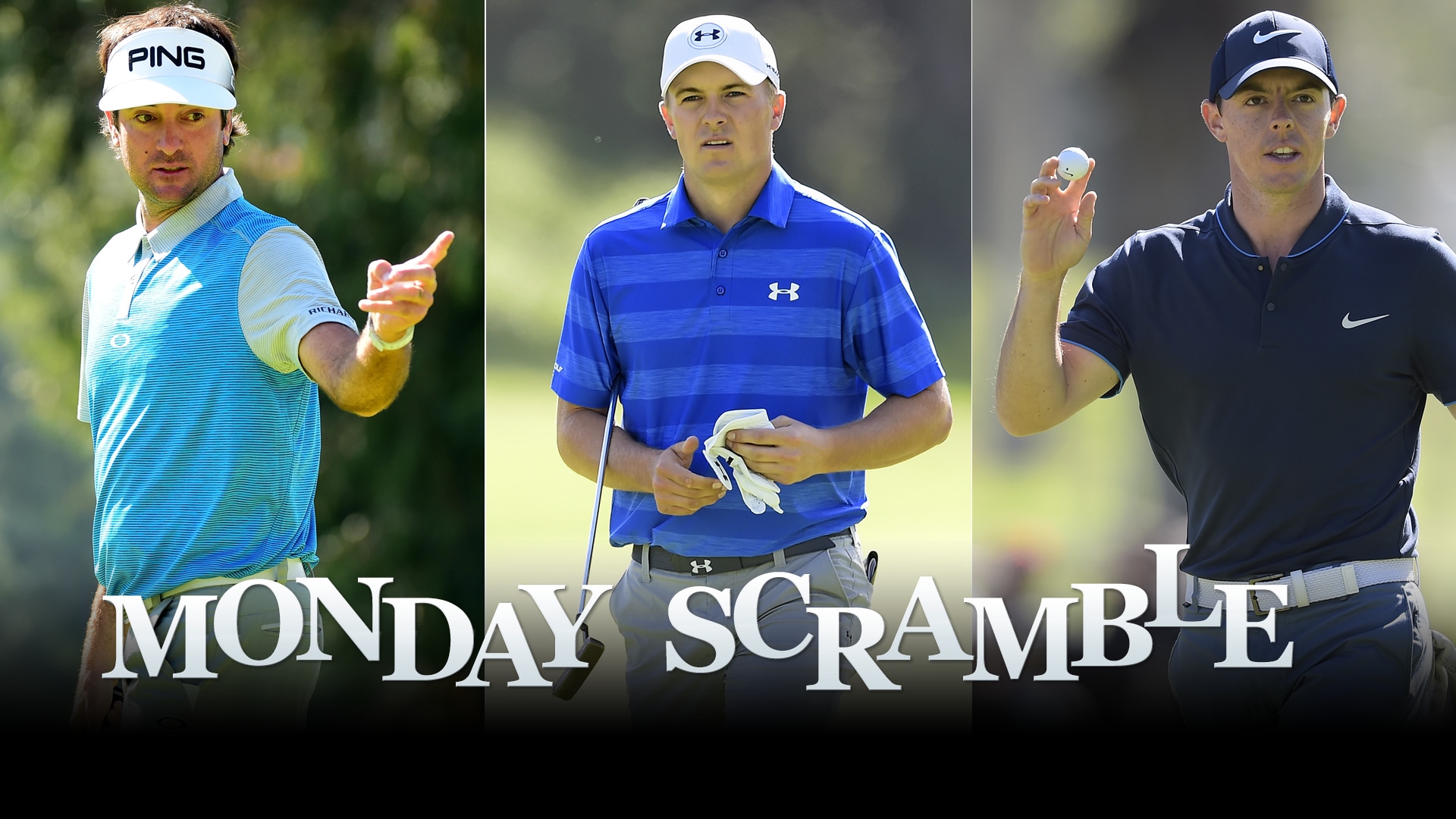 Bubba Watson ramps up for Augusta, Adam Scott rediscovers his confidence on the greens, the Jordan-Rory showdown fizzles, the PGA Tour heads to Florida and more in this week's edition of Monday Scramble.

The Masters is 44 days away, but we can't help but think about Augusta after watching Watson's victory at the Northern Trust Open.

Believe in omens? Consider this:

Bubba won at Riviera in 2014, at 15 under par, and took the Masters two months later.

He won again in LA this year, at 15 under par. Does a third green jacket await? He has to be on everyone's (very) short list of contenders.

Yes, that was the case before Watson birdied two of the last three holes to emerge from a crowded, eclectic leaderboard, but the lanky left-hander is often overlooked in this era of young, hip, popular stars. That’s partly because of his age (37), but there are other reasons, too, namely his week-to-week inconsistency and personality quirks that can rub fans and peers the wrong way.

For all of Watson’s mood swings, he is a joy to watch play golf, a genius with an awe-inspiring combination of power, creativity and imagination. And when he brushes in putts, like he did last week at Riviera, it’s a tough combination to beat, and it’s why, since 2010, only Rory McIlroy (11) has more wins than Watson’s nine.

1. With his victory at Riviera, Watson climbed the aforementioned list of players with the most PGA Tour wins since 2010:

2. Putting is the key statistic for every contender, of course, but it always seems like the go-to answer for Watson when analyzing his improved performance: Today, I just made some putts.

And because of his prodigious length and superior shot-making, that’s usually enough for him to win.

3. Watson joked a few years ago that if he ever reached 10 PGA Tour wins – a seemingly unattainable goal for the self-taught southpaw from Bagdad, Fla. – he would retire.

Good thing he clarified that statement – he’s almost there.

After his victory at the World Challenge in December, Watson changed his goals to include climbing to No. 1 in the world. Only then would he consider walking away.

4. Maybe Bubba is mentally tougher than he’s given credit for.

Sure, he still talks himself out of contention if he dislikes a course, but on this West Coast swing he also showed resilience.

In Phoenix, he endured such an endless barrage of jeers and taunts that a few of his peers complained on his behalf. He still tied for 14th, though he described the fallout as "heartbreaking" and "hurtful."

And then last Monday, he passed a kidney stone. He was asked what headline he'd like for that story.

5. With a closing 67, Scott earned his fifth worldwide runner-up finish since his last win at the 2014 Colonial – the tournament that validated his No. 1 ranking.

The Australian figures to play the entire season under the microscope, after the anchoring ban went into effect on Jan. 1.

Predictably, social media exploded with one-liners and memes when Scott made everything he looked at early Sunday, rolling in 109 feet worth of putts across the first six holes. But he has always been a streaky and inconsistent putter, from week-to-week and round-to-round, no matter the method. After the hot start, he made only 33 feet the rest of the way, and short misses on 14 and 15 doomed his chances.

In a lot of ways, that has been the story of his career: Some makes, some misses and, in the end, a boatload of high finishes. The reason 2015 was his first year without a win was because his ball-striking wasn’t good enough to mask his ineffectiveness on the greens. His driving and iron play were sterling at The Riv, a promising sign moving forward.

6. Kokrak made only one big mistake over his last 21 holes at Riviera.

It cost him his first Tour title.

Leading by two in the middle of the 15th fairway, Kokrak sailed his approach shot from 182 yards long and left of the green. He couldn’t get up and down from there, badly missing an 8-footer for par, and did well not to drop shots on the next two holes after poor tee shots.

''You've got to eliminate the mental mistakes,'' said Kokrak, but that's easier said than done, of course, especially for a player who was in an unfamiliar position.

7. Before Bubba stole the show, Riviera was billed as the first PGA Tour showdown of 2016 for Spieth and McIlroy.

It went poorly – for both players.

Let's start with McIlroy. He surged into a share of the lead with an eagle on the first hole Sunday, but he struggled with his speed control on the greens all day, dropping SEVEN shots before he rammed home a birdie on the 18th hole.

The 75 tied a career high for a non-major final round. The tie for 20th was his worst finish in four months. He'll be the favorite to win this week at PGA National, but this was a head-scratching finale in LA.

8. But as shocking as McIlroy's final-day slide was, by far the biggest surprise of the past week came last Thursday, when the world No. 1 missed eight putts inside 10 feet, got off to the worst start of his PGA Tour career and lost to Camilo Villegas – who hadn’t made a cut all year – by 16 strokes on one of his top-five favorite courses in the world.

By itself, this missed cut doesn’t mean much. Every Tour player, even the very best, have bad days and off-weeks. "It's going to happen," Spieth said. "Just unfortunate when it actually does."

If he can regroup, refocus and refine as the Tour moves to Florida, this will be but a blip on his 2016 résumé.

And keep this in mind, too: Spieth usually bounces back well from missed cuts. Of the 13 early exits in his career, he has returned a top-25 in 10 of those next starts, including three runners-up.

9. If nothing else, Spieth’s missed cut once again puts into perspective Woods’ incredible record:

10. Here are one man's takeaways from the West Coast swing:

Relying only on some of the clips that McIlroy has posted to his social media accounts, Brandel Chamblee said on an NBC Sports conference call that he can’t help but be reminded of Tiger Woods’ physical breakdown when he sees some of the “extensive weightlifting” that the world No. 3 is doing.

This wasn’t a new critique, nor was it particularly insightful – Chamblee, after all, has never lifted with McIlroy and has no idea what he really does under the direction of Steve McGregor, who has trained both the New York Knicks and Manchester City soccer team. (Or, in other words, he's a guy who knows what he’s doing.)

Most concerning, though, was the parallel with Tiger.

Woods was obsessed with working out, with looking like an athlete, with being viewed as strong and powerful. McIlroy, who had 22 percent body fat when he turned pro, works out mostly to avoid injury, to combat a degenerative disc in his back. Big difference.

Woods remains, for now, a cautionary tale for the gym rats, a player who was so hell-bent on being the most fit golfer of all time that he took it too far. As Chamblee himself conceded about McIlroy: “Thus far, there’s been no signs that it’s adversely affected his game.”

Not a Gear Head: Dustin Johnson. Asked if he was playing new irons at Riviera, DJ responded: "Yeah, I did, I put a new set of irons in. I think they are the [TaylorMade] PSi Tours, something like that." Never mind that the PSi logo was stitched onto the right side of his hat.

It’s Really Hard to Win: Soomin Lee. Leading by two with three to play at the Maybank Championship, the South Korean collapsed down the stretch, double-bogeying the 16th and 18th holes to hand the European Tour title to Marcus Fraser.

Common Sense Wins: Flipping the nines at East Lake for the Tour Championship. Wait, a 235-yard par 3 isn’t an exciting way to finish a season-long competition? Bring on the reachable par 5.

Shockingly, This Won’t Help Increase Interest: Kenny Perry’s thoughts on the senior circuit. Fed up with the lack of publicity, the 55-year-old said that the media and fans look at the PGA Tour Champions players as a “freak show” and that nothing that happens out there “means anything to anybody.”

Rory Isn’t the Only Person Working Out: Lindsey Vonn. While her ex is laid up somewhere recovering from another back surgery, here is Vonn, doing pullups in only body paint:

Even on set I never stopped training...now it's back to work. Excited to race this wknd in Italy! @SI_Swimsuit pic.twitter.com/hhQiLMnUob

Random Thought of the Week: Is Riviera’s 10th really that great of a hole if players intentionally send their drives left, into the trees, to give themselves the best chance to make 4?

Thanks, Fluff: Sung Kang. With the veteran caddie on the bag, Kang just posted two of the best results of his career.

In Need of an Explanation: How 3-year-old Caleb Watson came to receive a drumming lesson from Justin Bieber:

Thanks @justinbieber for showing Caleb how to drum!! #BieberFever pic.twitter.com/kF9X7IoNCw

Blown Fantasy Pick of the Week (non-Spieth division): Jimmy Walker. He hadn’t finished worse than 13th in his last four starts, and Riviera is one of Walker’s favorite courses on Tour – he had missed the cut only once in nine tries. Sorry. Make that twice. Sigh.