Monday Scramble: The whole world smiles with you 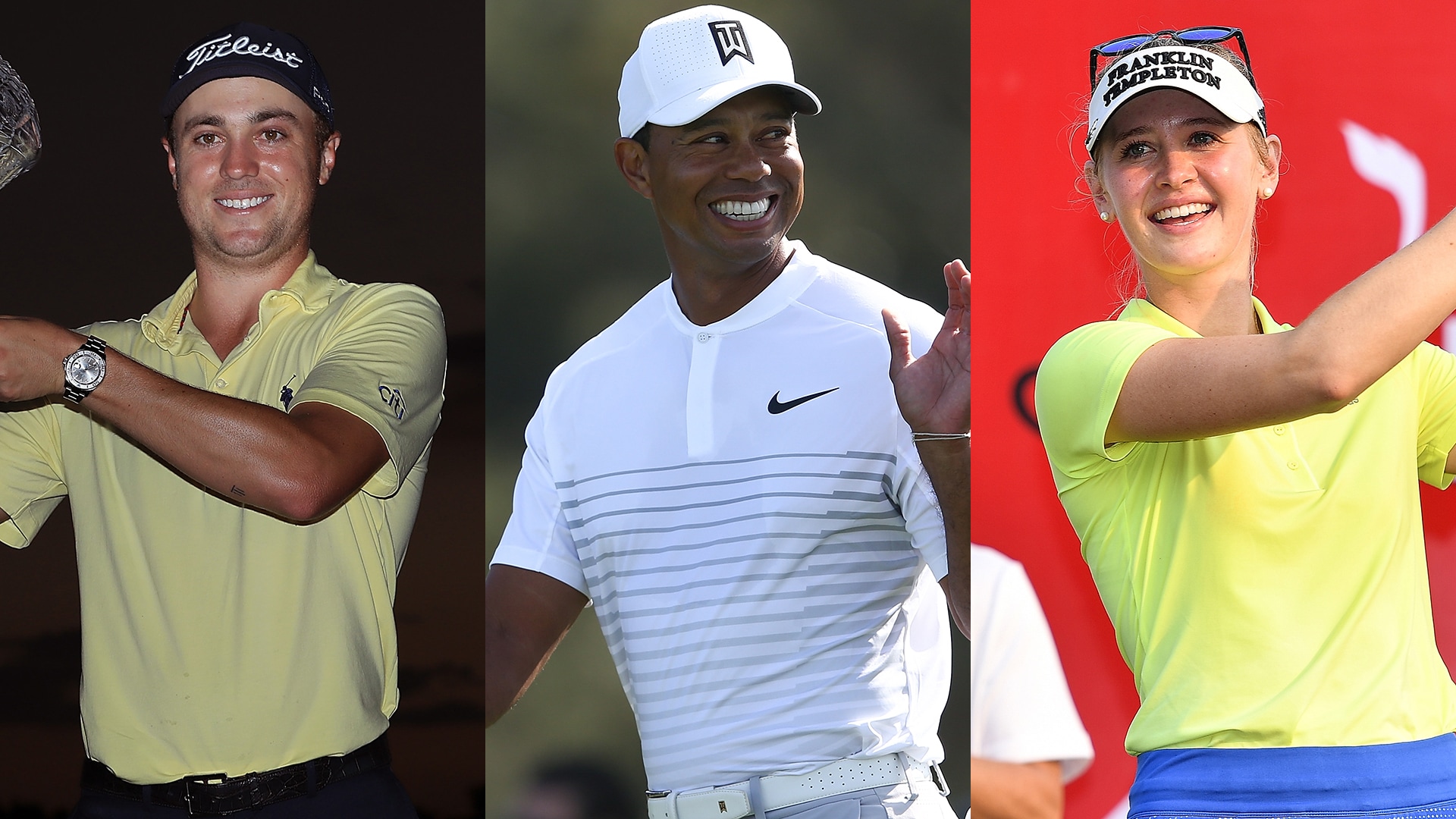 Justin Thomas isn’t just a free-wheeling birdie machine who fires at every flag.

The Honda Classic proved that.

The reigning PGA Tour Player of the Year has developed a smarter brand of golf that he has turned into seven wins in his past 31 starts.

That’s been the steepest learning curve for the 24-year-old, realizing that he doesn’t need to play perfect to win. He’s talented enough to make loads of birdies, but now he has the discipline to avoid the big mistake.

Down the stretch at PGA National, Thomas played the last 10 holes (including the playoff) in 3 under, using his power in obvious birdie situations and then playing away from the water on the most difficult holes.

The scary part for the rest of the Tour? Thomas seems to be getting better each week.

With Luke List already on the green in two shots in regulation, Thomas chose to lay up from a thick lie in the right rough. From 117 yards, he needed birdie, and he stuffed his gap wedge for a kick-in four.

He was even more aggressive in the playoff. With List banking his approach shot off the grandstand, Thomas hit a 259-yard 5-wood that cleared the water and rolled out to 40 feet, setting up his two-putt birdie.

Clutch shots, both of them.

2. Here’s my report on Thomas’ victory, including his claim that he’s playing even better now than his five-win season a year ago.

A week after criticizing some of the fan behavior at Riviera, Thomas signaled for a spectator to be ejected during the final round.

Tied for the lead as he walked to the 16th hole, Thomas heard a fan yell at him: “I hope you hit it in the water!”

When his tee shot headed down the middle, the same fan apparently shouted for the shot to find the bunker.

That’s when Thomas had enough.

“Who said that? Was it you? Enjoy your day, you’re done.”

Thomas got blasted on social media for being “soft,” but this type of fan behavior can’t be tolerated.

Unfortunately for Thomas, fans now know that they can get under his skin, and they may be even more tempted to heckle him. The Ryder Cup in Paris could be interesting.

4. So THAT was unexpected from Tiger Woods.

After spraying shots all over Torrey Pines and Riviera, Woods turned up at PGA National – one of the most demanding tee-to-green courses on Tour – and looked like a completely different player.

He shaped shots and controlled his trajectory, finishing the week ranked first in proximity to the hole. He was third in driving distance, curving the ball both ways off the tee with every club.

Woods finished 12th – his best finish in a Tour event since August 2015.

5. Every player in the field could play the woulda-coulda-shoulda game … but Woods played the Bear Trap 8 over par for the week. He played the other 60 holes 8 under.

That score would have been good enough for a playoff with Thomas and List.

6. Woods remained coy about the rest of his pre-Masters schedule, but it’d be a shock if he didn’t tee it up at least once more, at the Arnold Palmer Invitational, where he’s an eight-time winner.

After the round, Woods said that his only immediate plans were to get back in the gym, to keep his body strong and healthy. (We really gonna try this again?)

His goal is still to “build toward Augusta,” but one final tune-up – at a place he’s dominated – makes a ton of sense.

As for the rest of his 2018 outlook, even Woods can’t deny the obvious.

“My expectations have gone up,” he said.

7. Tip of the cap to Sam Burns, the 2017 Nicklaus Award winner and current Web.com Tour player who was paired with Woods on the final day of the Honda Classic.

The 21-year-old Burns was the youngest player to be paired with Woods in the final round of a Tour event since Sergio Garcia in 2001 … and all Burns did was shoot a bogey-free 68 to clip his idol by two shots and, with a tie for eighth, earn a spot in next week’s Valspar Championship.

And to think: Last August the USGA selection committee left Burns – the college Player of the Year who delayed turning pro to make the squad and who already had a top-10 in a Tour event – off the Walker Cup team, because he’s, well … no one is quite sure why, and the USGA doesn’t explain its decisions.

No matter. You can bet this round, and this week, will prove to be very useful for him.

8. So, no, Woods may not intimidate his opponents like he did in his prime, but he still can make playing alongside him difficult.

Just ask Patton Kizzire, a two-time winner this season. He was grouped with Woods for the first time in his career.

On their first hole Thursday, Kizzire said that he was so queasy that he wasn’t sure he was holding the club. He fought through the nerves, of course, but he told us afterward that he learned more during those two rounds – about playing with pressure, about handling himself – than in his two wins.

9. There’s no way to sugarcoat it: PGA National’s greens were in brutal shape for this year’s event.

A dry February left the greens firmer and faster than usual, but the course allowed heavy traffic until the Sunday before the event.

Several players noted how the sand-filled surfaces appeared to have been spray-painted green. There was so little grass that it made chipping and pitching around the green impossible to predict.

Everyone has to putt on the same surfaces, of course, but Woods made numerous references to the greens making it “tough” to hole putts, and that was charitable.

The TifEagle Bermuda greens are set for a re-grassing next summer, but after this disastrous week they should move up the project. These weren’t good enough for Tour standards.

10. It’ll also be interesting to see the field for this event next year. The Honda will always be a draw for the local residents, but it probably won’t be the no-brainer start it is now.

Next year, the Honda will likely be sandwiched between the WGC-Mexico and The Players, with Bay Hill and Tampa after that. The top guys need a break somewhere.

11. Nobody will ever doubt Jessica Korda’s toughness again.

She set a tournament record with a 25-under performance in Thailand to win by four shots. It was the fifth win of her career, and her first since 2015, but this was by far the most difficult.

In December, Korda, who turns 25 this week, had double jaw surgery that required 27 screws. Her jaw was broken in three places, and for weeks she was fed through a syringe.

When she made her season debut last week, her face was pain-free but still numb. Her headaches were gone, too. Finally.

“I just came with no expectations after surgery,” she said. “It’s really hard for me to move. All this stuff is still really hard, but I’m really, really happy that I chose to come back in this exactly where I started my rookie year in 2011.

“I don’t think I could have asked for a better win.”

12. Once labeled an up-and-coming star on the European Tour, Eddie Pepperell finally earned his breakthrough victory Sunday at the Qatar Masters, winning by one shot over Oliver Fisher.

“I did the things I needed to do,” he said afterward. “I didn’t play fantastic, but I won ugly, and for the first win to be ugly is good.”

The gregarious Pepperell needed 129 starts to earn his first title. He’s of the most fun characters in the game, chronicling the past few years on his highly entertaining blog.

Here was his father Joe's reaction to the win:

13. The first World Golf Championship of the new year will get underway this week in Mexico.

Defending champion Dustin Johnson is back, but the field is missing five of the top 13 in the world: Hideki Matsuyama, Jason Day, Brooks Koepka, Rory McIlroy and Henrik Stenson.

Jason Dufner doesn’t have a hat sponsor this year. That’s hard to believe, of course, since he’s a major champion and five-time PGA Tour winner, but that’s the deal.

Dufner can wear any cap he wants, and so while he was hanging out at Rickie Fowler’s house on Friday night, and with a third-round pairing with Tiger Woods looming, he picked through his hat selection and found this:

Warm weather, loose back: Tiger Woods. At one point Saturday, Woods’ swing speed clocked in at 128 mph. Perspective: That average swing speed would have led the Tour every year since 2007, when they first started keeping the statistic.

First time for everything: JT > Spieth. For the first time in his career, Thomas moved ahead of Spieth in the Official World Ranking, from No. 4 to No. 3. Asked if it was significant to him, Thomas said: “Not really, because there’s still two more spots that I want to climb.”

Oh, to be an elite amateur: Walker Cup. With the amateur version of the Ryder Cup headed back to the Old Course for 2023, the next four venues are secured: Royal Liverpool, Seminole, St. Andrews and Cypress Point. That any good?

Another penalty: Lexi Thompson. She was docked two shots for moving an advertising sign in her second round. They’re immovable obstructions, as outlined in the tournament handbook given to each player, which she must not have read.

Quote of the week: Justin Thomas. When told about his “(Expletive) yeah!” celebration on the 18th green, Thomas sheepishly apologized. “Please don’t fine me very much, PGA Tour.”

Blown fantasy pick of the week: Rickie Fowler. The defending champion at the Honda had a sub-70 scoring average at PGA National and a recent 54-hole lead in Phoenix, but he bombed out early with rounds of 71-76. Sigh.