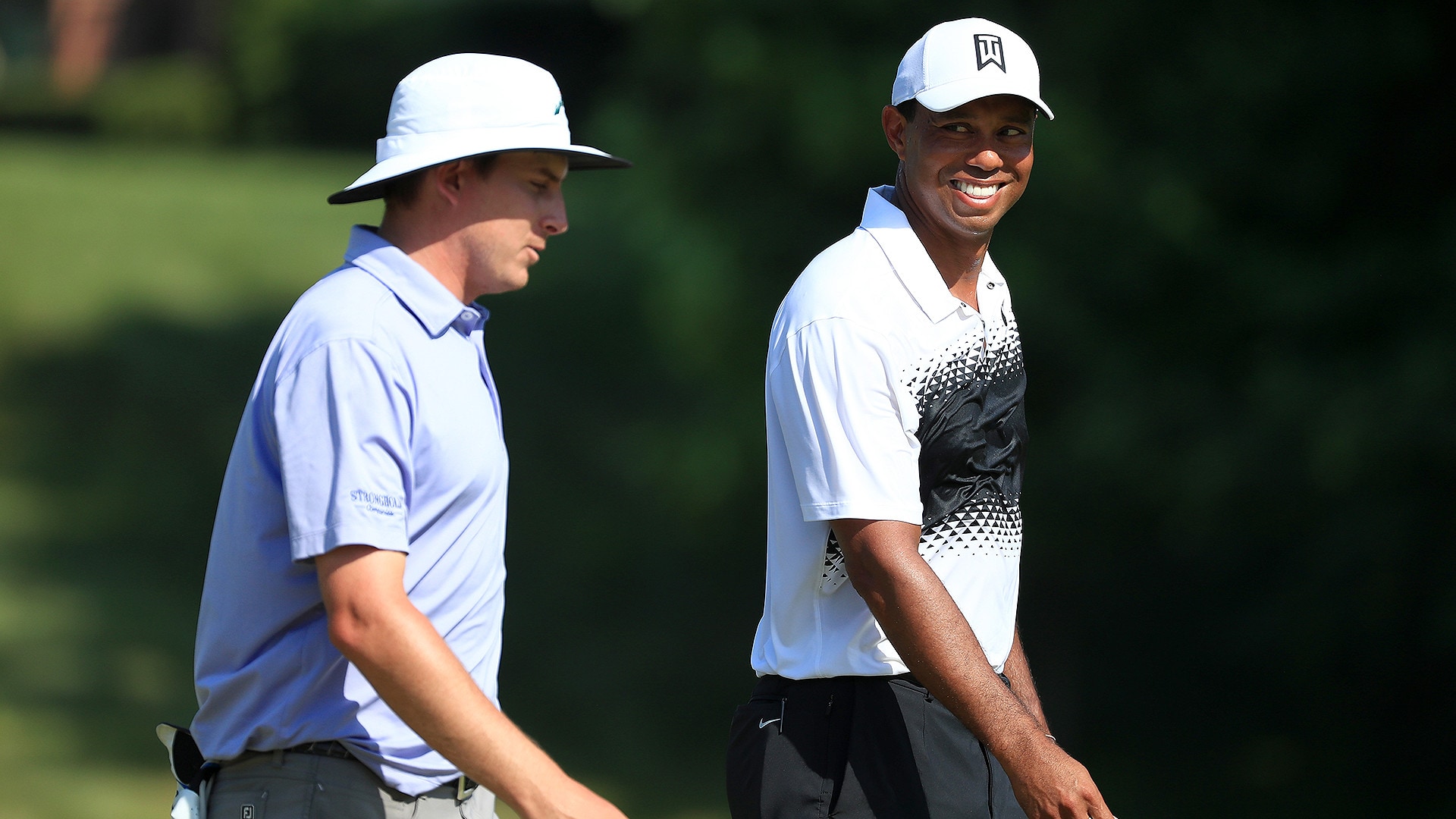 Tiger Woods racks up another top-5, Francesco Molinari runs away from the field, Sung Hyun Park and David Toms win majors, a PGA Tour cheating accusation emerges and more in this week's edition of Monday Scramble:

Tiger Woods is running out of reasonable chances to win this year, and that’s OK. He’s already proved that he once again has the skills to get it done.

In what was easily the weakest field he’s played (and will play) against all season, Woods finished 10 shots back of Francesco Molinari at the Quicken Loans National. While that may look like a setback, it was anything but. He kept the driver in play, continued to strike vintage iron shots and, finally, began to show signs of life with the putter. He finished fourth – his best showing, results-wise, since the Valspar in March.

Molinari is not what you’d consider a strong putter – he’s 192nd on the greens – but he ranked 17th last week at TPC Potomac. That’ll happen too for Woods, at some point, a week when he marries his sublime ball-striking with a warm putter. We see it every week on Tour.

Whether it happens this year – against the best fields, with two majors and the FedExCup playoffs on deck – remains to be seen.

1. Time for a blind-resume test!

Performance: 28th in strokes gained: off the tee, 14th tee to green, 24th approach the green, 22nd around the green, 177th putting

Player A is Jordan Spieth, the sixth-ranked player in the world.

Player B is Tiger, who is only 14 months removed from fusion surgery.

Conclusion: Woods already has one more top-12 and nearly as many FedExCup points in six fewer starts than the Golden Child. He's also been better in almost every statistical category. This has been a very good season for Woods – and even more remarkable considering the circumstances surrounding his return.

2. Much was made of Woods’ putter switch. He benched his trusty Scotty Cameron in favor of a mallet-style TaylorMade putter.

Woods rolled in 392 feet worth of putts and finished the week ranked seventh on the greens. It wasn’t perfect, of course: Woods was LAST in the field from inside 10 feet, missing 13 putts inside that range.

“It feels good, it really does,” he said afterward. “Even my bad putts still had the ‘go in’ look. That’s something that I haven’t had. When I was struggling there for a little bit, I couldn’t even cheer for my good ones.”

Let’s see how Woods’ new putter works on the slow greens of an Open Championship.

3. If you sometimes forget what Woods means to this next generation of pros, watch this: Bronson Burgoon, who played with Woods on Sunday, asked him for a series of photos after the round, a keepsake in case they never tee it up together again.

After being paired with Tiger Woods for the Final Round of the @QLNational, Bronson Burgoon made sure he got a picture.

4. As for the guy who actually won the tournament …

Francesco Molinari had a decision to make. He'd already had a strong year on the European circuit, winning the tour’s flagship event, the BMW PGA, where he stared down Rory McIlroy in the final round, but last week presented a conundrum: Play the French Open with the rest of the European Ryder Cup hopefuls, at the upcoming Ryder Cup site, or try to improve his FedExCup standing at the Quicken Loans?

He chose to head to the nation’s capital, since he's 123rd in points, and the move paid off handsomely. He became the ninth first-time winner on Tour this season, after smashing the tournament record for scoring (both 54 and 72 holes) and margin of victory.

5. Sung Kang finished third at TPC Potomac for his best finish since October, wrapping up a spot at the year’s third major in the process.

But it wasn’t without some controversy.

In a rarity on Tour, Kang’s playing partner, Joel Dahmen, accused Kang of cheating during a series of tweets on Sunday night. The incident stemmed from Kang’s second shot into the par-5 10th hole, which went into the hazard.

Dahmen tweeted that Kang’s shot “clearly did not cross the hazard,” so they went back and forth with a rules official for 25 minutes. Dahmen lost the argument, Kang dropped near the green and then made par on his way to a closing 64.

The dispute took so long that another group played through.

“Kang cheated,” Dahmen tweeted. “He took a bad drop from a hazard. I argued until I was blue. I lost.”

6. Look away, American golf fans: Alex Noren reminded observers just how much of a force he’ll be in Paris with a closing 67 to steal the French Open.

It’s his 10th European Tour title, six of which have come in the past three seasons. After rallying from a seven-shot deficit, he finished the event at 7 under – so barring a dramatic change in setup, there might not be a huge number of birdies come September at Le Golf National.

“This place could easily host a major,” Justin Thomas said. “I think it’s going to be a great venue for a Ryder Cup. It’s just a hard golf course. It’s very narrow. You have to hit the fairways to have birdie chances.”

Make no mistake: This Ryder Cup will favor the Europeans.

7. Jon Rahm caught a lot of heat for his petulant behavior at the 2017 U.S. Open, where he stomped and stormed his way to a missed cut. He vowed to improve his on-course comportment, and he has in some ways, but his performance at Shinnecock was a real eye-opener for Rahm. He tried to bottle up his emotions and wound up missing the cut.

“I went in with the mindset of trying to behave perfectly, which means having a smile on my face the whole time, and it’s hard to go against who you are, to be honest,” he told reporters last week. “To play better I have to feel my emotions, letting the emotions flow through me rather than trying to hold myself. … It’s the last time I’m ever going to make the mistake of trying to be somebody I’m not.”

Rahm had a chance to win on the back nine Sunday, but he tripled the 12th and bogeyed the last to finish two shots back. His attitude might turn off some golf fans, but credit to Rahm for recognizing what he believes allows him to play his best. As long as he doesn’t affect his playing partners, it’s all good.

8. Sung Hyun Park captured her second major title with a playoff victory over So Yeon Ryu and Nasa Hataoka at the KPMG PGA Championship. The 24-year-old South Korean won on the second extra hole to add to her major collection, after she claimed the 2017 U.S. Women’s Open title. (Read colleague Randall Mell's column here.)

Hataoka nearly pulled off the biggest comeback in LPGA history, erasing a nine-shot deficit with a Sunday 64, but this event likely will be remembered for Ryu’s final-round struggles. Staked to a three-shot lead at the start of the final day, she four-putted the second green for double bogey to let the rest of the field back in the tournament, then added four more birdies to regain a two-shot advantage. That’s when she yanked her tee shot into the water on 17, making double to drop into a playoff.

Now in his second year on the over-50 circuit, Toms rolled in a 15-footer and then a 20-footer over the last three holes to break out of a five-way tie and win the U.S. Senior Open by a shot.

It snapped a seven-year winless drought for the 2001 PGA champion.

John Daly lost the benefit of the doubt decades ago, so it was little surprise to see the USGA deny his request for a cart at last week’s U.S. Senior Open.

Daly might have actually gotten to use a cart at The Broadmoor (just like Scott Verplank did) but he didn’t file the additional paperwork that the USGA required. So no cart.

Rather than take responsibility, Daly hit back at the USGA, saying that he’d never play another USGA event again. Yawn.

His injury clearly isn't severe enough to keep him from playing this week’s Tour event at The Greenbrier. Guess what? He won’t be using a cart there, either.

Just Stop: Rocco Mediate. The 2008 U.S. Open runner-up called the complaining at Shinnecock “bulls---” and “horses---” and that the pros should just “shut up” and hit “better shots.” Maybe he’s auditioning for a spot on the USGA executive committee, but it’s not as simple as them hitting better shots. The USGA literally admitted that it lost the course during the third round, that its setup stopped rewarding well-struck shots. Any and all arguments end there.

Sending Our Best: Jarrod Lyle. The two-time cancer survivor is battling leukemia for the third time, and he’s apparently lost his vision and the doctors don’t know why. “I just feel like my body has had enough – I feel like it is ready to give up,” he told an Australian radio station. “Every little thing that comes my way turns into something a big bigger, but I guess I just still have that fighting spirit I’ve always had and want to get through it.” Keep fighting, big man! We’re all rooting for you.

Good Luck Late: 18th hole at Le Golf National. Can you imagine trying to find this “fairway” with the entire Ryder Cup on the line? Holy claustrophobia.

Players view from the 18th tee this week @hnaopendefrance one of the best finishing holes in golf no doubt pic.twitter.com/x45mfzbOVd

No Tips From Skip: Thomas Bjorn. The best players in the world probably won’t pick Bjorn’s brain on how to play Le Golf National. The European Ryder Cup captain shot rounds of 81-77 to miss the cut by a mile at the French Open.

If He Plays, They Will Come: Tiger. This is why we write and talk about this guy so much. People still care. A lot.

This Player #GetsIt: Jane Park. Have seen this up close too many times throughout the years – and Park’s tweets are a reminder that a simple thank you, head nod or acknowledgement go a long ways for these volunteers.

Just ran into a volunteer in the hallway with a McDonalds bag in his hand after a very long day. I thanked him for his help & he seemed surprised. He said I’m the first player to thank him this week. That sucks. Ladies, it takes 2 seconds to say thank you while walking by. DO IT.

That’s awful. Sometimes we are caught up in the moment and have blinders on, but that’s a shame you’ve never been thanked. Thank you for helping https://t.co/EINlzJlDHe

Blown Fantasy Pick of the Week: J.B. Holmes. At least he couldn’t affect another Sunday contender with his excruciating pace of play. He missed the cut after rounds of 73-70, ending a run of good play that included three consecutive top-15s, including a pair of top-3s. Sigh (but not really).