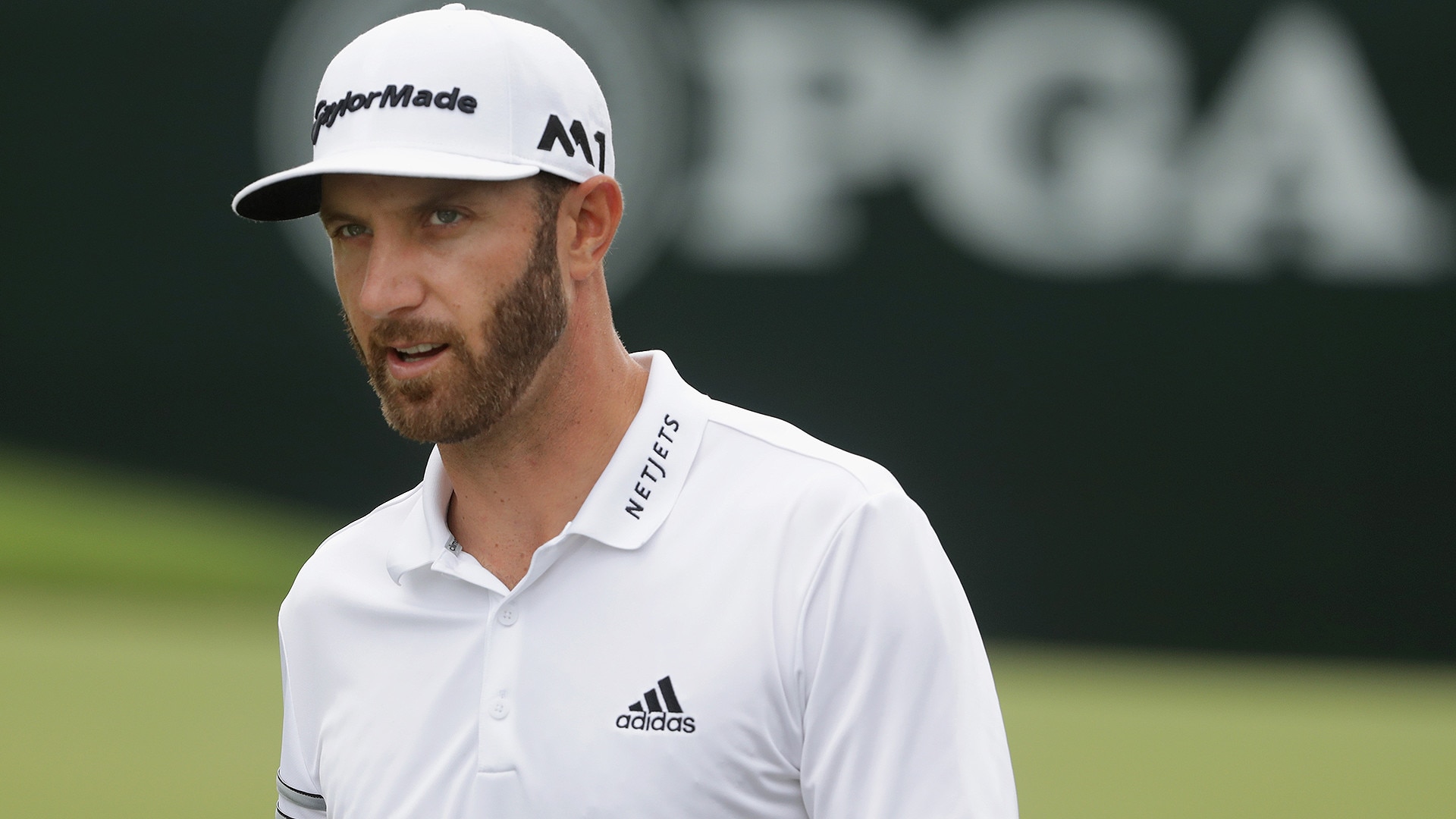 Dustin Johnson cruised to victory at the Canadian Open, an unsurprising result when you consider he bashed 350-yard drives and wedged it close.

It’s his 19th career title and third season in a row that he’s won at least three events, which throws into sharp relief the fact that he has only one major championship to show for it.

The 2016 U.S. Open was supposed to open the floodgates, but if DJ doesn’t capture the PGA next week, these last few seasons will feel unsatisfying, like a missed opportunity for a generational player in need of a few more legacy-defining titles.

These halcyon days won't last forever, and it's time to take advantage in the events that matter most.

1. As mentioned above, Johnson is the first player to win at least three times in three consecutive seasons since Tiger Woods.

“Just to be mentioned in the same sentence,” Johnson said, “I’m very pleased with that.”

But in case you forgot that Tiger was from another planet, consider this:

Almost every aspect of today’s Tour is better – better equipment, coaching, fitness, incentives, course conditioning – but Johnson is nowhere near the dominating presence at the top of the world order.

And he knows and accepts this.

“I don’t think anyone’s ever going to get to that level,” he said. “The way he played for that 10-year stretch was just incredible.”

2. Major or not, this could have been DJ’s most successful season.

He was able to close out the Canadian Open, but he’s only 3-for-6 with at least a share of the third-round lead this season. He blew chances to win in China, Pebble Beach and the U.S. Open, where he also led by four at the halfway point.

3. With 19 wins, Johnson now has as many PGA Tour titles as Ernie Els and Ben Crenshaw, among others.

And he’s just getting cooking.

Thirty wins – truly rarefied air, especially in this era of parity – is a realistic target. Only 18 players in history have reached that mark (and just Tiger, Phil and Vijay recently).

4. For a guy who’s on the U.S. Ryder Cup team bubble, Bryson DeChambeau didn’t do himself any favors Sunday at the European Open.

Leading with a few holes to go, DeChambeau completely melted down, playing the last four holes in 5 over par. That included a bogey on the 15th, where his decision to go for the flag on the watery par 5 defied explanation. That included an off-the-planet drive on 16, leading to another par-5 bogey. And that included a triple-bogey 8 on the last, where he found the pond with not only his smother-hooked drive, but his pull-skied 5-wood.

Even worse than DeChambeau’s self-immolation and closing 78 (dropping him to a tie for 13th) was his terse handshake afterward with Richard McEvoy, who was a winner in his 285th career start. Sure, DeChambeau was rightfully ticked off. But almost blowing off the winner for a handshake didn’t sit well with many (and he later apologized on Instagram).

If there’s any good news for DeChambeau, it’s that no Ryder Cup points were on offer, since he was playing on the European Tour. But you can be sure that Furyk saw exactly what happened.

5. There’s only two weeks left until the first eight automatic picks are finalized.

Right now, DeChambeau finds himself in the ninth spot, 41 points behind Webb Simpson but only 126 points ahead of Phil Mickelson, who is 10th. Two big-point events remain – this week’s WGC-Bridgestone Invitational and PGA Championship – and there could be some volatility around the bubble.

DeChambeau likely has a big supporter in Woods, with whom he’s played several practice rounds this year, but some of his other would-be teammates are sure to be leery of his approach and antics. Asked earlier this month what he could bring to the team, DeChambeau said his “uniqueness” might be his greatest asset. “I can maybe help people think in a different way that allows them to be more confident in whatever they do.”

Every player at the Ryder Cup is just trying not to yack up his breakfast. They probably don’t need a physics lesson beforehand.

6. How fitting, the coolest cat in golf, Miguel Angel Jimenez, winning the first senior major to be held on the Old Course.

It’s the second major of the year for the Mechanic, who has to be considered the favorite for Player of the Year, perhaps finally dethroning Bernhard Langer, who finished second Sunday at St. Andrews.

7. In what was likely his final competitive round ever at St. Andrews, Tom Watson slipped to a tie for 21st after a disappointing 77 in the final round.

At one point Watson held the lead in the third round. He trailed by only three shots heading into the final day, hoping to, at long last, at age 68, win on the famed links that eluded him throughout his Hall of Fame career.

Watson won five claret jugs, but never at St. Andrews, never at the greatest of them all, never at the place where Jack Nicklaus said a career couldn’t be complete without a victory there.

It seems Watson’s career will end without a title there. Bummer.

8. Ariya Jutanugarn returned to No. 1 in the world after her one-shot victory over Minjee Lee at the Ladies Scottish Open.

We’ve written this many times in this space, but it’s worth noting again: When Ariya is at the top of their game, there’s no one out there who can hang with her. Her well-rounded skill set is better than every other player’s on tour.

The problems she occasionally runs into aren’t physical.

Lexi Thompson announced that she was taking some more time off because the past year and a half have taken a “tremendous toll” on her mentally and physically.

Golf Channel insider Tim Rosaforte said that there’s “nothing to read into” her break. But the fact that at 23 she’s already overwhelmed by the past 18 months – her rules fiasco at the ANA; her mother, Judy, being diagnosed with cancer; her grandmother passing away; and her kicking away the season-ending CME Globe – is a troubling sign.

She hasn’t been herself this season – and she admitted as much in the statement – and it’s unlikely that a few more weeks off will get her back on track. This has all of the early signs of burnout.

The camera crews at the Ryder Cup might need to go through a metal detector.

Playing in the European Open in Germany, Reed had an altercation with a member of the remote camera crew, whom he accused of rattling change in his pocket while he was over his ball.

“I’m not hitting until y’all get the heck out of here,” he directed.

Seriously, someone is getting decked if that happens in Paris.

He Ain’t Lying: Colin Montgomerie. He made headlines last week when he said that Europe’s collection of stars for the Ryder Cup is probably their best ever … which of course is true. Every year, it seems, the Europeans have one or two players who either are slumping or a lower caliber of player than the Americans. That shouldn’t be the case this year. This squad is good – and stacked.

Tough Living: Web.com Tour. The cut at last week’s Web.com stop fell at 7 under. The winner posted 25 under. Little wonder it’s nicknamed the Wedge.com Tour, because you need to go stupid low.

Double the Fun: Martin Trainer. He became the Web's first two-time winner this season. Now, he’s shooting for that fully exempt status that goes to No. 1 on the money list.

RIP: Bruce Lietzke. The 13-time Tour winner, owner of the sweetest butter fade in golf, succumbed to brain cancer, at the age of 67. He was diagnosed in April 2017. Best wishes to his family.

Wrong Kind of Birdie: Mark James. Playing the daunting Road Hole in the opening round, James drilled a seagull with his tee shot, and his ball ricocheted right, out of bounds. Sometimes it’s just not your week.

Unluckiest golf shot of the year?

Mark James' tee shot on the famous 17th hole on the Old Course, St Andrews hits a bird before going out of bounds. #SeniorOpen pic.twitter.com/jow7G0YbqN

Feel-Good Story of the Week: Jean Van de Velde. He reunited with his old caddie, Christophe Angiolini, the man who was unfairly lambasted for his role in the 1999 Open debacle. They missed the cut at the Senior Open, but nonetheless it was cool to see them together again.

Tale of Two Nines: Tommy Fleetwood. In his first appearance at the Canadian Open, he played the front nine at Glen Abbey in 4 over par for the week. On the back? A scorching 20 under. It added up to a tie for sixth.

Blown Fantasy Pick of the Week: Brooks Koepka. The two-time U.S. Open champion bombed out with an opening 77 at Glen Abbey. It’s his first missed cut since Bay Hill in 2017, so here’s hoping it’s a momentary blip and he regroups for the Firestone-Bellerive doubleheader. Sigh.