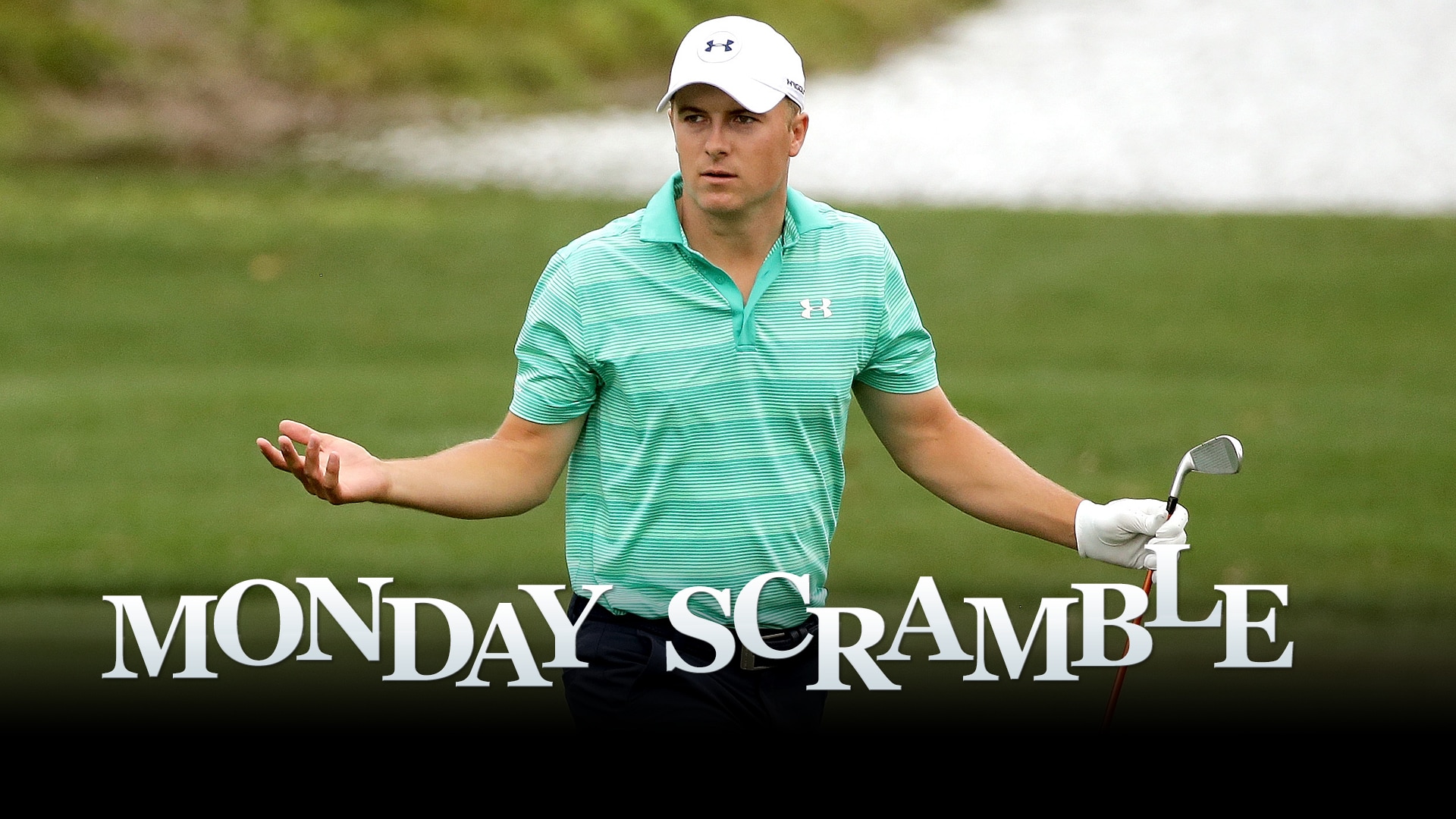 Charl Schwartzel ends his drought Stateside, Jordan Spieth fires back, another amateur shines on the PGA Tour, a guarantee goes awry and more in this week's edition of Monday Scramble:

Even major champions have to clear “mental hurdles” once they lose their way on the course.

Schwartzel’s epic four-birdie run to steal the 2011 Masters was supposed to propel him into another stratosphere, but it only led to more frustration.

“I figured that I would win a few times the way I played,” he said. “It just never came.”

His playoff victory Sunday in the Valspar Championship may have been his 15th career title worldwide, but it was only his second in the U.S. It doesn't add up.

The South African owns one of the most envy-inducing swings on Tour, yet he has rarely contended in the States. When his swing got off-track late last year, and his world ranking tumbled toward the top 50, he turned to the only coach he has ever known, his father, George.

“If you’re swinging well,” he said, “you start believing in yourself again because you’re hitting good shots.”

Schwartzel has hit plenty of them recently. He won twice in South Africa over the past few months, and then on Sunday in Tampa closed with the best round of the day, a 4-under 67, to earn that long-awaited second PGA Tour title.

1. The Masters must be right around the corner – the past champions are rounding into form.

The last five Masters winners all have won events so far this season, the latest coming at the Valspar, where Schwartzel erased a five-shot deficit on the final day and defeated Bill Haas on the first playoff hole.

Schwartzel followed victories by Spieth (Kapalua), Bubba Watson (Riviera) and Adam Scott (Doral and Honda). Even Phil Mickelson, the 2010 Masters champion, has shown resurgent play of late, holding the 54-hole lead at Pebble Beach and coming up one shot short.

2. The greens on Innisbrook’s Copperhead Course were resurfaced last summer, and it was clear early on at the Valspar that they were significantly slower than players were accustomed to.

That’s why, in a sense, it wasn’t a massive surprise that Schwartzel won on Sunday. The tournament was always going to come down to which player made the adjustment and the big putts during a week when everyone – Jordan Spieth included – struggled to get the ball to the cup.

3. Haas became the latest frontrunner to falter down the stretch at Innisbrook. Only twice in the past nine years has the 54-hole leader gone on to win.

Haas said that he was “hanging on by a thread” on the final day, but the tournament was in his hands with three holes to play. From a perfect spot in the 16th fairway, he fanned his approach into the greenside bunker and hit such a poor shot from the sand that he said a “12-handicapper could have done that.” The bogey dropped him into a playoff, which he lost on the first hole after another bogey.

Why all of the struggles for the leaders on the Copperhead Course? It’s a demanding, strategic layout that dishes out more bogeys than it surrenders birdies. Players are already tight while trying to protect a lead; the pressure is then ratcheted up on a course where every miscue is magnified.

4. It was an odd week both on and off the course for Spieth.

The opening 76 that fueled (absurd) talk of a slide. The quick trigger on social media. The spirited run into the top 10. The bafflement at the slower-than-normal greens. And then the caddie blame game.

The middle rounds of 68-67 showed his grit, but the common denominator last week was one of fatigue. He couldn’t adjust to the greens and showed plenty of frustration and indecision during a wind-whipped final round, his pace of play screeching to a halt at times.

Most unusual, though, was his post-round comment Sunday about poor decision-making with caddie Michael Greller – very surprising, indeed, given how in sync they were a year ago.

“We both get the credit when things are going good,” Spieth said, “and we’re going to take the fall today. I hit the shots, but we made a couple of decisions that make me look back and think, Wow, we’ve got some stuff to talk about before we get ready to go into a major. Bit of a bummer.”

Spieth still appears to be reeling from the early-season scheduling mistake. Ideally, he would take a few weeks off, regroup and get ready for the year’s first major and what figures to be an even more hectic summer. But it’s just not possible. On Monday morning, he was already in New York City promoting the Drive, Chip and Putt Championship. Then he has two events in a row, the Match Play and Houston, before the Masters. Will he ever catch his breath?

5. By the way, Spieth may not be at the top of his game, but it's worth remembering that he still has finished inside the top 21 in six of his seven starts this year. That's some "slump," all right.

6. I wrote a lot about amateur Lee McCoy here, but the main takeaway from his solo fourth in Tampa was that it’s time to start taking these college and amateur stars more seriously.

It seems like just a matter of time before an amateur wins again on Tour. It hasn’t happened since Mickelson, then a 20-year-old junior at Arizona State, won in 1991.

7. Even after a tough day, Spieth applauded McCoy as he finished out on the 18th green. Spieth, of course, knew the feeling well, contending in his hometown tournament as an amateur. He had done the same thing nearly six years earlier, when he stole the show at the 2010 Byron Nelson Championship in Dallas as a 16-year-old. He tied for 16th.

8. A new USGA rule that allows amateurs to participate in a pro event and then donate the earnings to a recognized charity won’t have as much of an impact as it initially seemed.

The PGA Tour made it clear that its regulations regarding amateur status remain unchanged and likely will stay that way for the foreseeable future. At Tour events, amateurs are not entitled to any official prize money, and the cash they would have earned goes to the player(s) directly behind him on the leaderboard.

That meant the $292,800 that would have gone to McCoy for his solo fourth instead was split by the players who tied for fifth, Graham DeLaet and Charles Howell III.

The aim of Rule 3-1b was to allow amateurs to compete in exhibitions or events that support a bona fide charity, not necessarily a U.S. Open or a Tour event. Instead, it was the tournament organizers in Tampa who stepped up for McCoy, offering to make an undisclosed donation to the charity of his choice – 50 Legs, started by a close friend of McCoy’s who provides prosthetic legs to kids and adults.

9. Last week might be the final time that DeLaet publicly declares that he’s going to win a tournament.

One shot back after 54 holes, the Canadian, winless in 136 PGA Tour starts, proclaimed that “tomorrow is going to be the day” and left little doubt that he was about to take the title.

DeLaet shot a birdie-less 75 and tied for fifth.

He backtracked afterward, saying that he didn’t “Babe Ruth and call my shot or anything like that. I needed to believe in myself. I wanted to take control.”

This was DeLaet’s 19th top-10 over the last four seasons. Only Sergio Garcia, with 21, has more over that span without a victory.

Gov.Kasich of Ohio just stated on a morning show that he doesn't watch politics or anything on television, he only watches the @GolfChannel

I'm Ryan Lavner, and I support this message.

• Double Whammy: McCoy’s amateur status. Not only did he miss out on nearly $300,000, but he couldn’t collect the non-member FedEx Cup points because he wasn’t a pro. That would have gone a long way toward qualifying him for the Web.com Tour Finals at the end of the year (and potentially earned his PGA Tour card), but now he’ll be starting from scratch once he turns pro after the NCAAs in June. Ouch.

• Have Game, Will Travel: Scott Hend. He finished 63rd out of 65 players at Doral, shooting 22 over. Seven days later, he won the European Tour event in Thailand, shooting 18 under.

• Anyone Hiring a Writer?: Tiger Woods. The former world No. 1 tapped out his second blog post in the past nine days, only this time, well, he didn't have much to say, writing about a three-week-old Ryder Cup dinner and his nationally televised appearance at Bluejack National. Maybe writing is a form of physical therapy?

• End of an Era?: Ian Poulter at the WGC-Match Play. Barring any other withdrawals, one of the best match-play competitors of his generation will miss the event for the first time since 2003. Patton Kizzire currently holds the 66th and final spot for Austin.

• Take Cover!: Justin Thomas' failed driver-off-the-deck shot Saturday. From 268 yards away, Thomas tried to reach the par 5 in two on the 14th hole at Innisbrook. He hit well behind the ball and sliced it, badly, into a few unsuspecting fans. The best part? He still made birdie.

• Um, Whatever Works?: Shingo Katayama. If you don't think pros are always looking for the next key to make more putts, check out this pre-shot routine:

Shingo Katayama does things his own way! #ThailandClassichttps://t.co/9rEsvgpnJn