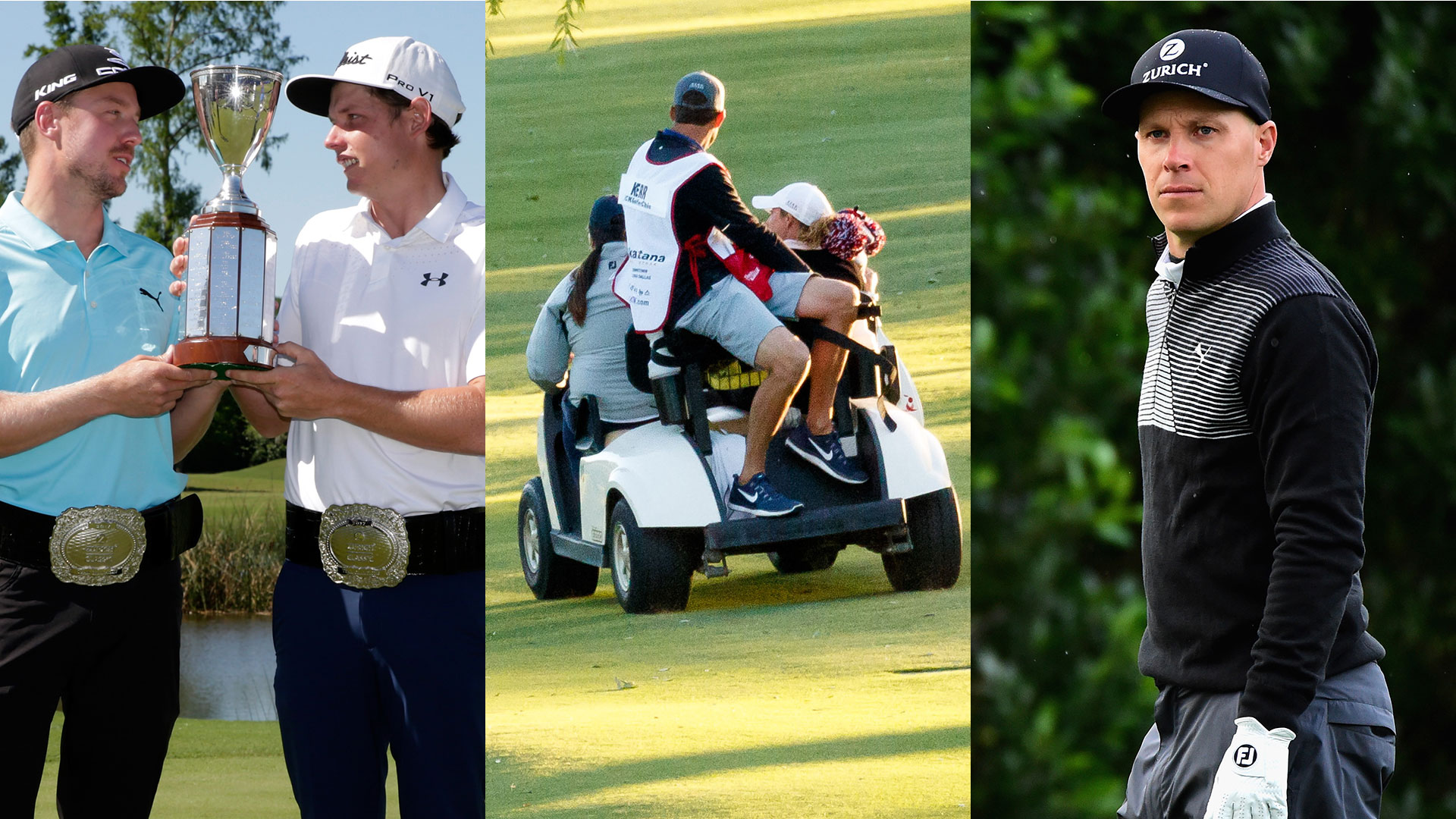 The new team format at the Zurich Classic was a hit.

The success of a Tour event largely depends on player support, and the New Orleans stop now has plenty of it, with several guys remarking how much fun the event was and how they wished the circuit had one or two more events like it.

For years, the Zurich has been an afterthought, a C-level event on a mediocre course during a dead time on the golf calendar. The switch to a two-man team competition gave the event new life, and it also gave those in Ponte Vedra Beach reason to believe that there’s room on the schedule for team golf other than the Ryder and Presidents cups.

Now, it’s up to commissioner Jay Monahan and Co. to keep the momentum rolling, to find new and interesting ways to liven up the Tour.

1. On Monday morning, Cameron Smith sealed a victory that seemed destined to be his the previous night.

From an awkward lie on the 72nd hole, the Australian had wedged to kick-in range to set up an easy birdie and post 27 under par. That’s when Kevin Kisner, using only the light from a nearby video board, banked his 30-yard pitch shot off the flagstick and into the cup for an unlikely eagle-3 to force a playoff.

After three uninspiring playoff holes, Smith hit a perfect drive on 18, ripped a 3-wood up the gut and then stuffed his 57-yard wedge shot to 3 feet.

For the 23-year-old Smith, it’s his breakthrough Tour title and earns him a two-year exemption, as well as a spot in The Players, the PGA and the 2018-opening Tournament of Champions. It is his partner Jonas Blixt's third Tour victory, but his first since 2013.

“He’s gonna be a superstar one day,” Blixt said of his partner, “and you can see it now. Seeing how he played golf this week, the sky is the limit for him. I haven’t seen anything that good in an extremely long time.”

2. Kisner and partner Scott Brown said they didn’t run out of gas, but they definitely ran out of magic.

After recording 16 birdies in a 19-hole span, the team from Aiken, S.C., made par on 10 of their last 11 holes. They were caught by Blixt-Smith in regulation, then that birdie drought kept the door ajar during the four-hole playoff.

3. Even a new format couldn’t put the Zurich on Mother Nature’s good side.

The six-hour weather delay Sunday added to a growing list of delays at this event. In fact, 43 percent of the rounds (12) since 2010 have either been suspended or canceled.

There is no easy solution to the event’s weather woes. Move the Zurich any earlier in the year, and it’ll be a tough sell for players who are focused on preparing for the Masters. Any later, and players will be subjected to suffocating heat and humidity, and the event would lose its team-play appeal with the Ryder or Presidents cups drawing closer.

Ideally, the event would be played two weeks after the Masters (or a week earlier than this year), while officials can hope for the best with the weather.

4. After 22 years, Glen Day is officially off the clock.

The PGA Tour finally decided to call a slow-play penalty, and curiously it waited until the first round of foursomes play – a format unfamiliar to more than half the field – in the first team event on Tour since 1981.

My thoughts on the penalty can be found here. The CliffsNotes version: By going after a couple of little-known players - Brian Campbell and Miguel Angel Carballo - and by ignoring the extenuating circumstances, the Tour proved that it really has no idea how to stop slow play.

5. Not to be outdone, the European Tour handed out a slow-play penalty to Soomin Lee at last week’s Volvo China Open.

Lee received three bad times before he was finally docked a stroke.

Check out the video:

6. With extra eyeballs on the tour because of the weather issues in New Orleans, the LPGA once again failed to deliver.

Just a few weeks after the rules debacle at the ANA, the Volunteers of America Texas Shootout was marred by a never-ending playoff and unfathomably slow play from veteran Cristie Kerr.

It didn’t help that the players were forced to play the poorly designed finishing hole six times.

Look, there’s a reason the playoff rotation usually calls for the 18th hole over and over again – that's where the fans are. But the LPGA and every other tour needs to show flexibility when it becomes clear that hole won’t produce a final result in timely fashion.

Both players have to compete on the same hole. What’s the big deal in moving it around?

7. Thompson and her "team" missed a massive opportunity last week in Texas, the LPGA star’s first event since she was slapped with a four-shot penalty that derailed her at the year’s first major.

Instead of admitting that she had committed an infraction, instead of vowing to mark the ball more carefully in the future, Thompson sounded defiant and refused to acknowledge the obvious – that she had played from an incorrect spot. That her team appears committed to prolonging the controversy, saying that the LPGA needs to provide a “true and transparent” accounting, is even more of a head-scratcher.

Making an already emotional 22-year-old continue to relive the worst day of her golf career is a mistake. Even if the LPGA does divulge information about the viewer who emailed the infraction – and there is no incentive for the tour to do so – it won’t change the fact that Thompson lost.

She needs to move on. Speaking of Lexi ...

8. The USGA and R&A took another step toward limiting video evidence by introducing a new decision to the Rules of Golf that allows a committee to overturn a penalty if it is determined that the infraction could not have been seen by the naked eye or that the player used reasonable judgment. The full news story can be found here.

The new rule, effective immediately, will help a player in Anna Nordqvist’s situation but not necessarily in Thompson’s. Nordqvist’s penalty last year at the U.S. Women’s Open, when she grazed a few grains of sand on her backswing, could only be detected on slow-motion replay. She wouldn’t be penalized now.

But the same is not necessarily true for Thompson, or at least it’s not as clear-cut. The committee will now be able to discuss the incident with everyone involved – the player, the caddies, the officials in the group, etc. – and also factor in the egregiousness of the error. On a 16-inch putt, it could be argued that Thompson’s re-marking was not reasonably judged.

9. Of course, a larger issue remains: The post-round scorecard penalty.

When news broke of the new decision, players were asked their thoughts on the change. Most thought it was a step in the right direction, but more needed to be done.

That there even needs to be a scorecard in 2017, with a mountain of ShotLink data providing scores and yardages and other information, is debatable. But penalizing a player for signing a card that is only determined to be incorrect later is outdated and just plain unfair.

The USGA and R&A are taking a “deeper evaluation” of scorecard penalties and viewer call-ins, though the latter issue has no simple solution.

10. Nothing gets the blood pumping quite like a FedEx Cup points structure story, but here’s the takeaway from the Ian Poulter saga: He has Brian Gay to thank.

It was Gay (who had locked up his card but hadn’t done enough, points-wise, to qualify for The Players) who brought the inequalities in this year’s points breakdown to the attention of the Tour higher-ups. They unanimously agreed that the players competing on major medicals – who were trying to retain exempt status based on a previous year’s standings – were at a disadvantage because of the change this season that devalued finishes between 15th and 68th.

Poulter had no idea, but he's the main beneficiary of Gay's investigation.

Now, the Englishman can turn his attention to trying to keep his card after this season. He’s 129th in FedEx Cup points, but he has the rest of the season, with no restrictions, to crack the top 125.

Kimberly you and @BrianGayPGA I will see you both at TPC and will deliver something very nice. Thanks for uncovering the oversight. Wow https://t.co/pP8UzvTk8K

Thanks for the support with getting my card back. And please give @BrianGayPGA some love for uncovering it. #LoveBrian

Crane is now known for not only his slow play, but his slow pay.

He was reminded again last week that fast money makes fast friends because he was called out on Twitter by Tom Gillis, whose “friend” alleged that Crane owed him $6,000 for losing a putting contest earlier this year in Phoenix.

Turns out – thanks to Charley Hoffman – that that “friend” was PGA Tour winner Daniel Berger.

The issue was “handled,” according to all sides involved, but Crane is now a slowpoke in more ways than one.

He's Back: Dustin Johnson. The world No. 1 returns to action for the first time since withdrawing from the Masters because of a back injury. He’ll be looking for his fourth consecutive title – no player has won that many in a row since Tiger in 2007-08 (six).

Quite the Comeback: Alexander Levy. The Frenchman rallied from seven shots back to steal the China Open. It’s the largest final-round comeback this season on the European Tour.

Not Bad For a Retired Golfer: Charlie Wi. The 45-year-old journeyman teamed with K.J. Choi and was only two shots off the halfway lead. Wi had retired as a full-time player last summer, choosing to teach juniors in LA over the grind of a 25-event schedule. They tied for 24th.

First Time for Everything: Drinking Sprite, not some alcoholic beverage, out of the Ryder Cup trophy.

Not the first time the cup has been drank out of, but by nobody smaller or cuter!! @RyderCupUSA #GoUSA #MoreSpritePlease pic.twitter.com/lIu7iytu81

Learning Experience: Eun Jeong Seong. The 17-year-old, who won the U.S. Girls’ Junior and U.S. Amateur in the same year, shot three consecutive rounds of 69 in Texas before getting blown off the course during a Sunday 86. She’s ready for the pro ranks, even if the final round in wind-whipped conditions suggested otherwise.

Best Laid Schemes: Pac-12 Men’s Championship. The 72-hole conference championship in Boulder, Colo., was reduced to a shotgun start and 54 holes because of – you guessed it – snow. An ideal way to prepare for NCAAs, it was not. We hear the weather in Southern California and Arizona is lovely this time of year.

Best Wishes: John Senden. He has taken a leave from the PGA Tour after his son, Jacob, was diagnosed with the brain cancer. All the best to the Senden family.

Something About New Orleans: Brian Stuard. The defending champion at the Zurich, he teamed with Chris Stroud to tie for 11th. It was his first top-15 finish in the 31 events since his rain-shortened victory at TPC Louisiana a year ago.

Blown Fantasy Pick of the Week: Justin Rose. Making his first start since a playoff loss at the Masters, the Englishman was returning to a place where he won in 2015 and had three other top-15 finishes since 2012. He was also playing alongside world No. 6 Henrik Stenson, with whom he has successfully partnered at the Ryder Cup. No matter. They both rinsed their second shots during Friday fourballs and missed the cut by one. Sigh.