Monday Scramble: Surges and resurgence at The Players 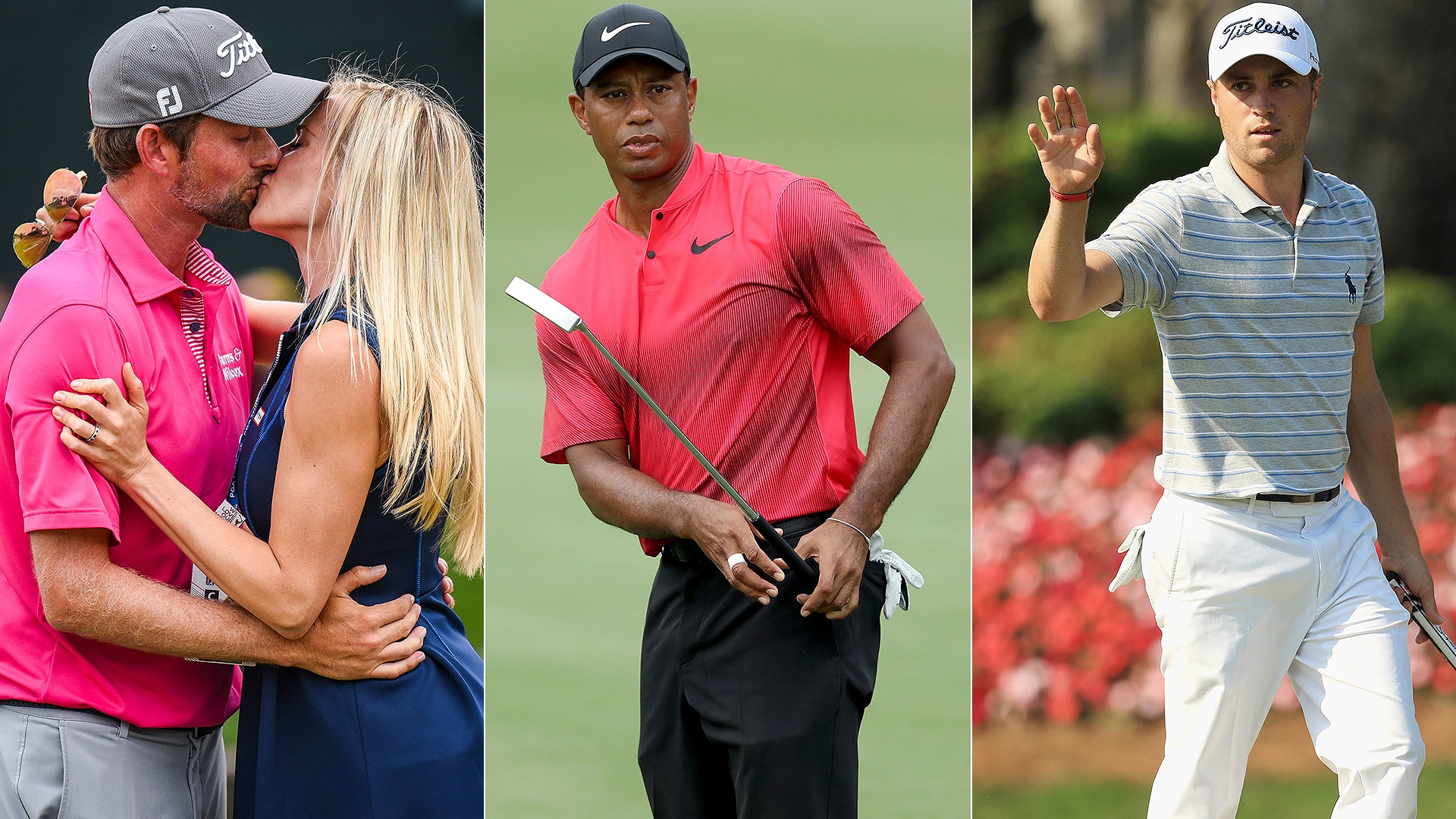 One of the many gifts the late Sam Simpson hoped to instill in his son was perseverance, and sure enough Webb’s grit is what won him The Players.

His play was only part of the equation. Back from golf purgatory, Simpson searched long and hard for a putting method that allowed him to capitalize on his unique skill set post-anchor ban. It doesn’t look pretty, and neither does his swing, but it’s hard to argue with the results.

The other aspect was more personal. Sam lost his long, agonizing battle with Lewy Body Dementia last November, and it’s taken years for Webb to come to peace with the prospect of losing his father too soon.

Both Webb and his caddie, Paul Tesori, said afterward that they were exhausted. Sure, winning golf’s fifth major on a course as demanding as TPC Sawgrass is taxing, but more because it was hard work to even get to this point.

1. On the 18th green, a teary Webb Simpson said that he wanted to win The Players for his mom. Hearing that seven hours away, in Raleigh, N.C., his mother, Debbie, wept.

For more on their relationship, and their trying past six months, click here for my Sunday night game story from TPC Sawgrass.

2. Simpson was the only player in the top 40 who didn’t shoot par or better in the final round.

That’s one of the benefits of a seven-shot cushion – he didn’t need to.

Simpson’s putting was so sublime that he sucked the life out of the tournament midway through the third round. He opened 66-63 and then, even while “putting like a normal person,” built the largest 54-hole lead ever at The Players.

After devoting countless hours to honing what was a perfectly legal method for putting, Simpson’s career was turned upside down by the USGA’s decision to ban anchored putting.

Consistently one of the Tour’s above-average putters, he dropped outside the top 175 for two consecutive seasons in 2015-16. When he came to The Players last year, he was ranked 192nd, and caddie Paul Tesori said that he didn’t think Simpson would ever putt well again.

That week he ran into Tim Clark, and he tried the claw grip, and after a year he’s worked himself back into a top-5 putter. Last week was an absurd display: He gained more than nine shots on the field on the greens and sank more than 455 feet worth of putts.

“I hope he doesn’t putt too well with that thing up the arm,” Scott said, “or they’ll ban that, too.”

4. With his win at The Players, Simpson jumped from 23rd to ninth in the Ryder Cup standings. If he continues this form, he won’t have to text his way onto the team – he’ll be in Paris.

That’d be welcome news for Bubba Watson, with whom he paired during the 2012 and ’14 Ryder Cups.

The rest of the squad could feature a few other fresh faces.

Left-hander Brian Harman is 11th. Bryson DeChambeau, who has three top-4s recently, is now 12th in the standings. Reigning Rookie of the Year Xander Schauffele is in the 14th spot. Big-hitting Tony Finau and Gary Woodland are 15th and 17th, respectively.

5. Justin Thomas showed why he’s the new No. 1-ranked player in the world, shooting 10 under on the weekend to salvage a tie for 11th during a week in which he made the cut on the number.

The world rankings finally caught up with the eye test over the past year and a half. He has six wins including a major over the past 17 months, putting an end to Dustin Johnson’s 64-week reign at the top.

At 25, Thomas becomes the fourth-youngest world No. 1 history, behind Tiger Woods, Jordan Spieth and Rory McIlroy.

“It’s not something I just want to do once,” he said. “I want to do it for a really, really long time. I want to have it for a really long, because that means I’m playing better than everybody else for an extended period of time. If I have it and then fall off the map, that doesn’t really mean a whole lot to me. I would much rather continue to play well for another five to 10 years and see how long I can have it.”

He opened up a huge lead in the rankings after ripping off three wins in a row in early 2017. Since that torrid stretch, he has two other wins and nine top-10s. In stroke-play events this calendar year, he hasn’t finished worse than 17th.

This could be a back-and-forth battle for the next few months, if not longer.

7. Tiger Woods needed a little help to stick around for the weekend. By late Sunday afternoon, he was only four shots back and looking to scare Simpson into a late mistake.

Instead, it was Woods who took a few steps back down the stretch. He misfired with a sand wedge on 14, leading to a bogey, then didn’t birdie the easy 16th and rinsed his tee shot on 17 when the wind turned back into his face.

He came away with a tie for 11th, which is impressive considering his uneven start, but it also could have been so much more.

“I’m not that far off from winning golf tournaments,” he said.

A start at Memorial, certainly, and there are bigger goals on the horizon.

After his final round, he stated for the first time that he wanted to get back to Firestone. It’s the final year that it’ll host the WGC-Bridgestone Invitational before it moves to TPC Southwind, and Woods is an eight-time winner in Akron.

To qualify, Woods will need to be inside the top 50 in the world by late July. He’s now ranked 80th, but likely with only three more starts to close the gap.

He can also start making plans for September. He already has 548 FedExCup points this season (current rank: 48). Even if he doesn’t earn another point this season, he’d nearly have enough to qualify for the third playoff event, in Philadelphia.

9. Phil Mickelson had a curious week at The Players.

After lobbing some good-natured barbs at Woods during his pre-tournament news conference, Mickelson fell completely flat during the opening round, shooting a 79 en route to his worst showing at TPC Sawgrass in 18 years.

He also expressed concern about his “energy levels,” but did not elaborate further. It’s not the first time he’s mentioned that.

10. Of course, Mickelson might have had more energy if he wasn’t sweltering under a long-sleeve dress shirt and undershirt in humid, 90-degree Florida weather.

A new Mizzen+Main endorser and part owner, Mickelson wore the stretchy, athletic dress shirt for the second time this year. (The first was during that much-publicized practice round with Woods at the Masters.) We’re not the fashion police here, but judging by the reaction on social media it was not a good look – and it looked even worse with the way Mickelson played.

If he starts Mizzen more cuts, he'll need to change his attire. (I'll see myself out.)

11. This was the final Players in May. Beginning next year, golf’s fifth major returns to March, where it was positioned prior to 2007.

The schedule change produces a big event for seven consecutive months: The Players, Masters, PGA, U.S. Open, Open Championship, the playoffs and then the Ryder Cup/Presidents Cup (though the 2019 Prez Cup will be held in December).

So, what will change with the March date? For starters the course will be more telegenic, with overseeded ryegrass instead of bermuda. It’ll play softer. And there’ll be a different wind, out of the north and northeast, which will make the 17th and 18th even more difficult.

Quizzing players last week was a challenge, because the March date will be new for many. Nearly 90 percent of this year’s field had never played the tournament when it was held in March.

Chris DiMarco’s son won’t have a tee time at U.S. Open sectionals, and he only has himself to blame.

We wrote the story here, but Cristian DiMarco, a standout left-hander at the University of South Florida, bailed after his round last week because he didn’t think he’d earn one of the five available spots in the local qualifier. Trouble was, he found himself in a playoff, and when the other competitor didn’t show, either, the tournament officials followed protocol and went to a coin flip – a coin flip! – to determine the winner … and DiMarco lost.

“I’m very disappointed in myself for leaving, but in the grand scheme of things, is it really going to make a huge difference in my career?” he said. “I hope not. I hope I’ll play in many U.S. Opens.”

That Was Costly: Jason Dufner. Facing a 17-footer for birdie on 18, he knocked it 3 feet past and then missed the comebacker, too. From potentially solo second into a tie for fifth? That cost him $770,000.

Photo of the Week: NBC Sports cameraman John Boeddeker. Sent this out on Twitter over the weekend, but it's worth showing again. So cool.

.@NBCSports cameraman John Boeddeker sent along this incredible photo of Tiger and the iconic 17th: pic.twitter.com/c8gEUFqQPI

Ready to Rock?: Jordan Spieth. He’s playing three weeks in a row, including at this week’s new Nelson venue, Trinity Forest, where he should have a significant advantage. Even after a closing 74 at TPC Sawgrass, Spieth said that he feels as good about his game as he has in “two-plus years.” Hmmm.

Minor-League Victory: Stephan Jaeger. Not eligible for The Players, Jaeger, who has his PGA Tour card, dropped back to the Web.com Tour for a week and won. Hey, beat up on your guys with your own status!

Don’t Mess With Texas: NCAA women’s regionals. A mysterious virus swept the regional in Austin, Texas, sending coaches and players scrambling for the garbage cans and bathrooms. What horrible timing, especially for a team like Michigan State, since there are no exemptions into the NCAA Championship – every team has to earn its way through regionals, even if many of the players are ill.

Didn’t Expect to See This: DJ using AimPoint. So, just to be clear, DJ – regarded as one of the most naturally talented players on Tour, a physical freak who doesn’t overthink anything on the course or in his life – now uses both TrackMan AND AimPoint Express to maximize his results. He apparently picked up the latter in a day. We have so many questions …

And They Say You Can’t Curve the Ball With Today’s Equipment: Tiger Woods. This is NSFW-level stuff.

The clear frontrunner for “Traj of the Year.” pic.twitter.com/8OBBgkIS64

Blown Fantasy Pick of the Week: Rickie Fowler. His bizarre record at TPC Sawgrass continues, with another missed cut to go along with his six other finishes outside the top 60. He was in good shape to play the weekend until his ball got stuck in a tree late in his round, leading to back-to-back double bogeys that sent him packing. Sigh.