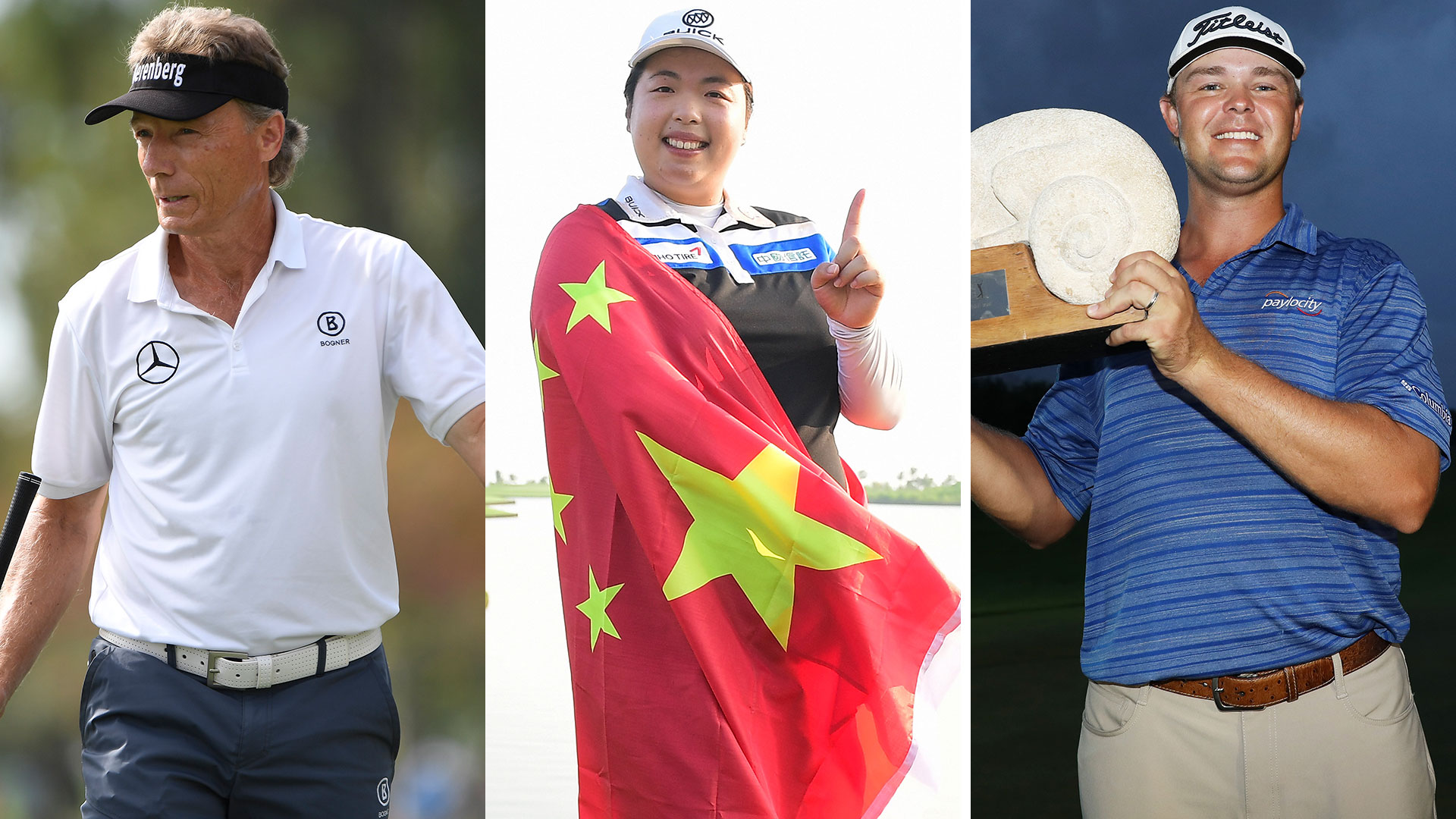 Bernhard Langer gets robbed, Patton Kizzire breaks through, Kevin Sutherland ends a drought, the LPGA season comes to an end and more in this week's edition of the Monday Scramble:

The Charles Schwab Cup playoffs produced a familiar, unsatisfying ending Sunday: The best player didn’t walk away with the hardware.

That’s been the case for too many years with the PGA Tour’s FedExCup playoffs, a big reason why the postseason structure is poised to undergo a major overhaul.

“Season-long champion” and “season-finale drama” typically don’t mix, and yet the PGA Tour (and, by extension, the senior circuit) continues to try to force the issue with talk of point resets and “controlling your own destiny.” All it creates is more fan confusion and player frustration.

That anyone other than Bernhard Langer – who won a tour-best seven times, including three majors and two of the three playoff events – could capture the “season-long prize” was absurd, just as it was when Rory McIlroy or Dustin Johnson failed to win the FedExCup.

1. This isn’t meant to diminish Kevin Sutherland’s accomplishment. Even without a victory this year, he entered the week at No. 5 on the points list and could take the Schwab Cup with a win or high finish at the season finale. He got the job done, while Langer finished 12th.

Still, the resumes don’t match up.

Forget the guy who showed up at the right time. Disregard the comparisons to the 2007 New England Patriots, who went undefeated and then lost the Super Bowl.

The question the Tour should be trying to answer with these “playoffs” is who had the best year?

In this case, the answer is obvious.

2. Langer is on the PGA Tour Champions policy board and, even though he voted to approve this version, said it needs tweaking:

“I think it needs adjusting,” he said. “I do, personally, because you could have somebody win the whole thing that hasn’t won a tournament all year, and I’m not sure that’s ideal. But I was on the [PGA Tour Champions policy] board. We said we’re going to try this out. I’m not sure if it’s perfect. It’s maybe like the FedExCup. They had to adjust it two or three times to make it interesting but also make it a little fair.

“It was never meant to be fair. It was meant to be playoffs. Everyone in the field has a chance to win. Is it fair? No, it’s not, but that’s how it is right now.”

3. That it was Sutherland who ended Langer’s bid for four consecutive Schwab Cup titles was a surprise.

This was the 53-year-old’s first victory ANYWHERE since 2002, and his first stroke-play victory on either the PGA or Champions tours.

“It’s been a long time since I won a tournament,” he said. “I think, early on, I was beating myself up a little bit. But this year, I didn’t really get too frustrated by it. I knew I was playing well, and if I kept doing what I was doing, I was eventually going to get a win.”

Talk about a well-timed breakthrough – he earned $1.44 million.

4. As much as it pains this Georgia grad to admit, it was an awfully good weekend for Auburn athletics.

Sure, the Tigers knocked off the top-ranked Dawgs. (Single tear.) But big ol’ country boy Patton Kizzire survived a 36-hole Sunday to hold off Rickie Fowler and win his first Tour event, the OHL Classic at Mayakoba.

The first win is never easy, but Fowler made it even tougher by trimming a four-shot deficit to just one stroke as they played the 72nd hole.

With his ball just outside a fairway bunker, Kizzire played a remarkable shot under the circumstances – crowding the ball, choking down on an 8-iron, he hit his approach to about 30 feet, setting up a two-putt par.

With the victory, he earned a spot in the Masters and likely will reach the Tour Championship for the first time in his career.

5. Making his first start in five weeks, Fowler came up just short. This one would have been special, as he tried to win for the first time in front of his grandparents. (His grandfather, Yutaka, taught him the game at age 2.) You may recall that Fowler broke down in tears at the 2016 Phoenix Open, when he lost in a playoff with his grandparents in attendance. It seemed clear then that he tried too hard to win for them.

That wasn’t the case in Mexico; he just got outplayed during the marathon Sunday. Fowler made Kizzire earn it, making birdie on the 70th and 71st holes, but his approach into the final green didn’t cut enough from a hanging lie, leaving him a 35-footer to force a playoff. He left it short.

6. In a year of special moments, Branden Grace added another one Sunday as he became the first South African in a decade to win “Africa’s Major,” the Nedbank Challenge.

Grace hit every green and holed a 40-footer on 16 en route to a final-round 66 and one-stroke victory, his first worldwide since the 2016 RBC Heritage.

No South African had won this event since Trevor Immelman in 2007. Throw in Grace’s record-setting 62 at The Open, and no doubt it’s been a memorable year.

7. Tommy Fleetwood tied for 10th in Sun City, extending his lead atop the Race to Dubai standings.

Heading into this week’s DP World Tour Championship, the only two players who can catch Fleetwood for the season-ending prize are Justin Rose and Sergio Garcia, and even their chances are unlikely. Rose trails by more than 250,000 points, while Garcia is more than a million behind. Everyone else in the field is just playing for a slice of the bonus pie.

“Just to be in with a chance of winning the Race to Dubai, it’s pretty special, really,” Fleetwood told reporters. “I don’t feel stressed about it. I don’t feel anxious. And as much as it depends on what they do [in Dubai], it is in my hands.”

8. There’s more than one way to get to the top of the world.

Shanshan Feng showed that last week, winning for the second consecutive week and ascending to No. 1 in the Rolex Rankings for the first time … despite ranking 97th on tour in driving distance.

Lexi Thompson might have the most firepower of any of the top players, but if there are massive holes in her game – and there are – then it’ll be difficult for her to dominate against more complete (if shorter-hitting) players.

Feng is the FIFTH No. 1 player this year, joining Lydia Ko, Ariya Jutanugarn, So Yeon Ryu, S.H. Park (who held the top spot for a total of one week) and now Feng.

10. The top five players in the Race to the CME Globe standings will take the top prize if they also win the season-ending event.

Those players who – all together now – control their own destiny this week: Lexi Thompson, Sung Hyun Park, Shanshan Feng, So Yeon Ryu and Brooke Henderson.

So much is still to be determined, and not just the $1 million bonus. Still up for grabs are the Player of the Year awards, the money title and the Vare Trophy for low scoring average.

11. There is a massive gulf between those who survive second stage of Web.com Tour Q-School and those who do not, and fortunately for us some familiar names are guaranteed at least conditional status next year on the Web.

Among those who advanced are Maverick McNealy, Sam Burns, Sean Crocker, Jimmy Stanger and Jack Maguire.

Unfortunately, A.J. McInerney, who bypassed a free start at Mayakoba to play second stage, failed to reach the final stage.

Hey, you’d be hard-pressed to find a bigger fan of Jon Rahm than this correspondent … but even this is a bit much.

The Spaniard made his first Tour start (as an amateur) at the Mayakoba in 2014. For some reason, tournament officials decided to make a plaque to commemorate that moment, even though he’s unlikely to ever play there again.

Mayakoba going in BIG on the Rahm IPO... pic.twitter.com/id5wbIMqZm About to Receive a Call From a 904 Number: Grayson Murray. After Sutherland’s victory, Murray, the controversial second-year player who has had his fair share of social-media incidents, wondered aloud whether anyone actually cares about the Tour’s senior circuit. In a now-deleted tweet, he asked: "Does anyone really care is the real question.....those guys were relevant 10 plus years ago." Yeah, that’s probably a no-no.

Auspicious Debut: John Oda. In his first PGA Tour event as a pro, the former UNLV star challenged for the lead through two rounds and wound up in eighth. Impressive.

Hey, Remember Me?: Si Woo Kim. He had gone quiet since his Players win, as his third-place showing at Mayakoba was his first top-10 in 15 starts since Sawgrass. Awkward Line of Questioning of the Week: Reporter to Rickie Fowler.

Fowler: “Not yet. Not yet. I’m in a good spot both in my personal life and professional life.”

Bluegrass Special: Valhalla. In case you missed it, the PGA-owned course in Louisville will host the year’s second major – yeah, it felt strange to type that – in 2024. Rory McIlroy won there in '14.

Blown Fantasy Pick of the Week: Pat Perez. The defending champion had come in with good form, winning the CIMB Classic a few weeks ago and finishing no worse than 24th since the playoffs. Then he threw up a second-round 74 to barely make the cut and tied for 34th (after a closing 66) in his title defense. Sigh.