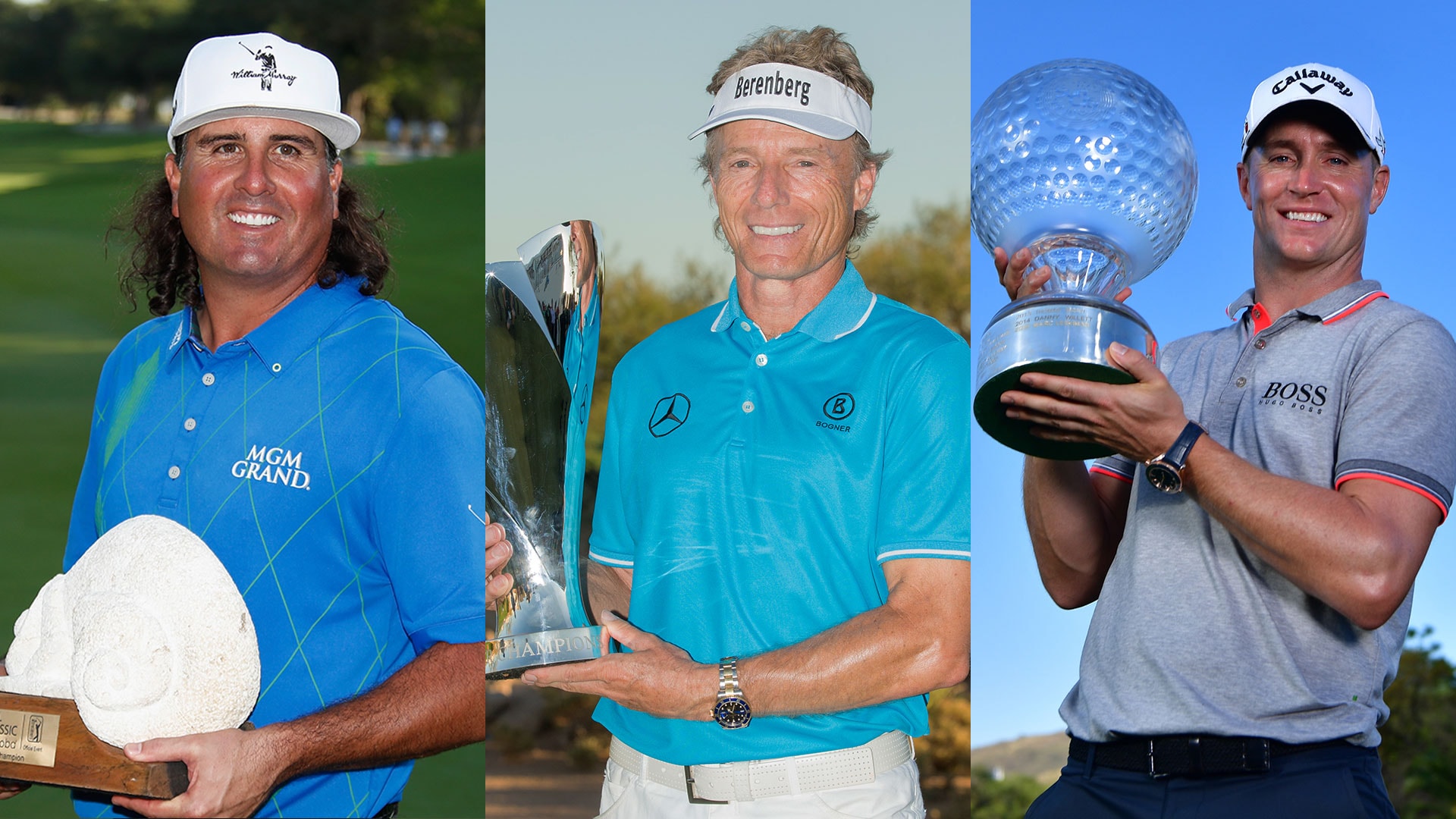 Pat Perez shrugs off an injury, Bernhard Langer collects more hardware, Alex Noren joins the OWGR top-10, the rules undergo a makeover and more in this week's edition of the Monday Scramble:

Perez underwent shoulder surgery in March. It was his first break he had taken – physically, mentally, emotionally – in 18 years as a pro.

And so a guy who is known mostly for his on-course outbursts returned to the Tour with a new dose of perspective. “I just try to stay aggressive and try to think of the right shot and a good shot and not worry about what happens,” he said.

It worked – he won in just his third start since coming back.

The grind of a 30-event season doesn’t offer much time for self-reflection, so it’s possible Perez wouldn’t have discovered that new attitude without being sidelined.

Now 40, he's in the midst of a career resurgence. 1. Perez was playing this season on a major medical extension, after missing the last six months of the 2015-16 season with a shoulder injury. He needed to make $670,050 in 15 starts to retain his card for next season.

2. Perez was on such a heater that he played his last 10 holes in 1 over par – and STILL won by two shots.

Over the weekend, he played a 26-hole span in 14 under. That allowed him to surge past third-round leader Gary Woodland and coast to his first victory since 2009.

3. Woodland, meanwhile, dropped to 1-for-6 with the 54-hole lead after posting a final-round 70 at Mayakoba.

He had a one-shot lead heading into Sunday, but he got off to a rocky start, bogeying two of his first three holes in what was going to be a final-day shootout. He birdied the last two holes just to shoot 70, which matched the highest Sunday score of anyone in the top 14. 4. They can change the format. They can add a playoff system that, in theory, creates some unpredictability. But each PGA Tour Champions season still ends the same way – with Langer holding the most important trophy.

For the third consecutive year, and the fourth time overall, he claimed the Charles Schwab Cup title.

Remarkably, he has never won the season finale (he does have three runners-up), but he never has needed to. Paul Goydos won this year’s event, in wire-to-wire fashion.

5. This was supposed to be the beginning of the end for Langer. He wasn’t supposed to survive without his trusty anchored putter.

All he did this year was win four times and finish in the top 10 in all but three of his 21 starts. All he did was contend at the Masters. All he did was top the money list, at $3,016,959. All he did was finish second in putting average, even while moving the long wand a few inches from his sternum. (Oh, by the way: He has finished second or better in that category every year since 2012.)

6. In EACH of the past three years, Langer has been ranked No. 1 in the following categories:

At 59, he continues to defy the odds. 7. Of this year’s many breakout stars, perhaps none has been as meteoric as Noren.

The 34-year-old Swede, who was ranked 108th in the world as recently as the U.S. Open in June, just won for a European Tour-best fourth time this season. Now, when he checks his world ranking, he’ll notice he’s above Bubba Watson and Rickie Fowler and Paul Casey and Sergio Garcia and Phil Mickelson – at No. 9 in the world.

His most recent victory, at the Nedbank Challenge in South Africa, had his peers begging for mercy. Starting the final round six shots back, he won by the same margin after a closing 63 – the best round of the day by four shots.

Ok @Alex_Noren will you stay at home next week and give the rest of us a chance. Great win again

8. By the way, Darren Clarke’s captain’s picks for the Ryder Cup look even worse now.

Thomas Pieters is an absolute star, but Lee Westwood and Martin Kaymer were disasters, combining to go 1-6. It’s foolish to speculate how Paul Casey, Russell Knox and Noren would have fared at Hazeltine, but it’s clear (as Rory McIlroy and others have stated) that the Europeans should put politics aside and have the best 12 players, period.

9. Henrik Stenson finished eighth in Sun City to create even more of a cushion at the top of the Race to Dubai standings.

He is nearly 300,000 points ahead of Danny Willett, who finally showed signs of life, going 67-69 on the weekend to tie for 11th. Noren is now third in the standings, followed by Rory McIlroy. All four players have a mathematical chance to win the big prize this week in Dubai. 10. Might we see wholesale changes to the golf calendar in 2020 and beyond? Here’s hoping.

PGA CEO Pete Bevacqua said last week that “to make sure golf is in the Olympics for the next century, the whole schedule needs to be adjusted.”

What that likely means is that, in four years, The Players would move to March, the PGA to May and the Tour season would end on Labor Day.

This revamped schedule could pose a few issues. After all, The Players was pushed from March to May because the weather is more unpredictable in the spring, it was too close to the Masters and it competed against college basketball. And putting the PGA in May might impact some of the northern courses, like Rochester’s Oak Hill, which could struggle to get ready in time after a harsh winter.

But this move would be praised by almost everyone, especially the players. Most importantly, it would alleviate the logjam that occurred this summer, with some players forced to choose which events they’d skip in order to survive the marathon stretch.

11. For the first time since 1981, the PGA Tour will have a team event on the schedule, with the Zurich Classic of New Orleans changing from a regular 72-hole stroke-play tournament to a two-man team competition.

The only thing memorable about the past few editions has been the weather. That could still be a problem next year, regardless of format, but it’s cool that the Tour is willing to shake things up in what is otherwise a third-tier tour event that struggles to attract a deep field. Partnerships of Rickie Fowler-Jason Day and Justin Rose-Henrik Stenson already have added some buzz.

For our money, charbroiled oysters and crawfish remain the favorites. 12. The LPGA season ends this week at the CME Group Tour Championship in Florida – and there is still plenty at stake.

After a rousing battle this year, Ariya Jutanugarn, Lydia Ko and Brooke Henderson all can capture the season-long prize with a victory this week at Tiburon.

As for Rolex Player of the Year honors, Ko needs a victory to overtake Jutanugarn. The money title (Jutanugarn leads by $17,305) and Vare Trophy (at 69.611, Ko has a slim lead over In Gee Chun) are also up for grabs. A new draft of the Rules of Golf – one that, thankfully, is “simpler,” in “plain English” and “easier to apply” – is set for release next year.

Sure, we’re still skeptical – this is the USGA, after all – but any attempt to bring more common sense back into golf should be considered a step in the right direction.

Still on Fire: Hideki Matsuyama. He won again in Japan over the weekend. These are his last five results: 5-1-2-1-1. He is also 72 under over his last 14 rounds.

Random Thought of the Week: Why isn’t the Charles Schwab Cup Championship a four-round event? The entire season comes down to this event, and they can’t even trot out the seniors for a fourth round, like the majors? Weak.

Not What He Had in Mind: Ollie Schniederjans. This scribe’s pick for Rookie of the Year, Ollie is off to a rough start this season, missing his third consecutive cut while shooting a combined 20 over par. Feel-Good Story: Aditi Ashok. Fans might remember the name, after she briefly took the second-round lead at the Olympics. On Sunday, the 18-year-old became the first player from India to win a Ladies European Tour event.

This Will Cheer Up Your Girlfriend: Adam Blyth. After starting 65-63 at the New South Wales Open, he “fired” his girlfriend/caddie at the halfway point of the tournament, opting for his usual looper, his dad. The move didn’t cost him the victory – he still won by four shots, at 24 under par for the week – and they'll all enjoy the first-place check.

Do You Even Lift?: Greg Norman. Dude's seriously jacked. And he's 61!

The architect of El Camaleón stopped by to admire his work. pic.twitter.com/yToKJeZG4g

Makin' It Rain: John Peterson. For the first time in 54 weeks, he cashed a PGA Tour paycheck, with a tie for 15th in Mexico. He missed all of last season because of a hand injury.

Where's Golf Channel Cameras When You Need Them?: Charley Hoffman, going HAM on his golf bag.

Blown Fantasy Pick of the Week: Harris English. A former winner here (2013) … the owner of the tournament record (21 under) … coming in off 13 consecutive made cuts … including a T-4 in Vegas … and then he missed the cut. Sigh.

'No decision' on PGA, but qualifier postponed

The PGA of America has postponed its Professional Championship, but no decision has been made regarding the fate of the PGA Championship.

The PGA of America issued a statement Tuesday refuting reports that there are plans to move the PGA Championship from TPC Harding Park later this year.