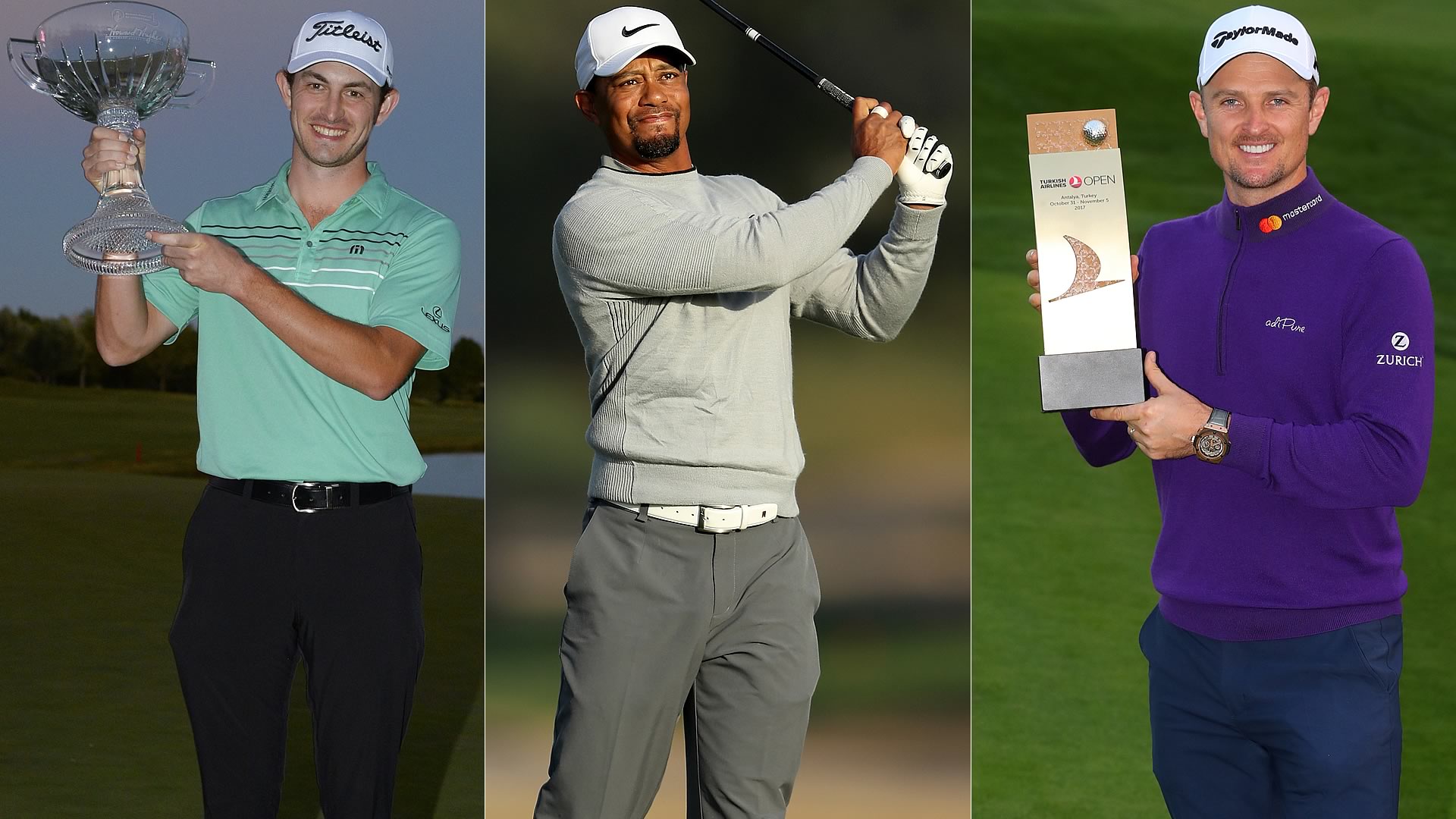 Patrick Cantlay breaks through, Justin Rose stays hot, Tiger Woods announces his return, a new No. 1 emerges in women's golf and more in this week's edition of Monday Scramble:

Was there any other way for Cantlay to get his first win, needing grit and determination and a short memory? It was a fitting first triumph for a kid who has already endured so much.

Once a can’t-miss prospect, he disappeared following a series of physical and personal setbacks. His talent never was a question. It was whether his body would ever allow him to reach his full potential.

Still just 25, Cantlay is fresher than most players his age after three years away from competition. He feels great now – he played a ton of golf this fall, with no limitations – and after a strong 2017 campaign in which he reached the Tour Championship with only a dozen starts, he is now a PGA Tour winner, surviving a nervy finish and three-man playoff in Vegas.

The past few years haven’t been easy. So why would his Tour breakthrough?

1. The last hour of golf at the Shriners Hospitals for Children Open was ugly, but it did feature at least one stellar shot.

On the second playoff hole, Cantlay flared his drive into the right rough, behind a tree.

With 185 yards to the flag, and believing that he needed a par to stay alive, Cantlay played the only shot he could – a cut, punch 4-iron that went under one tree branch and over another.

“It was a good shot,” he said. “I was very committed to hitting a good one there.”

Cantlay two-putted from the back fringe for the win over Whee Kim and Alex Cejka.

2. Here’s a story that I wrote about Cantlay’s return in February. It remains one of the only times that he has discussed his personal tragedy, when he watched his best friend and caddie, Chris Roth, get killed in a hit-and-run accident in 2016.

Here’s what he said Sunday night about overcoming adversity to play good golf:

“I don’t really associate the two together that way,” he said. “It feels good to be doing what I feel like I was born to do and what I practiced to do for such a long time. The other part is so separate and it was such a heartbreaking deal that it’s not even on the same level as golf.”

3. After beginning the year unranked, Cantlay is all the way up to No. 42 in the world.

Jordan Spieth said two months ago that Cantlay is a future top-10 player in the world, a guy who will be a fixture on U.S. cup teams for years to come.

Given Cantlay’s track record, is anyone going to argue? This was the first of many titles.

4. Cantlay wasn’t the only feel-good story of the week.

A.J. McInerney, the Las Vegas resident who survived the worst mass shooting in U.S. history, used a sponsor exemption to earn a tie for 10th in his Tour debut.

That created a dilemma. By virtue of his top-10, McInerney would have been exempt into this week’s event at Mayakoba, but even more pressing was the second stage of Web.com Tour Q-School, which begins Tuesday. He needs somewhere to play next year, so he made the tough choice:

5. After winning just twice in his previous 62 starts, Justin Rose went back-to-back on the European Tour.

Rose rode a 64-65 weekend in Turkey to overtake a resurgent Nicolas Colsaerts and move within striking distance of Tommy Fleetwood at the top of the Race to Dubai standings (134,839 points). He hasn’t won the European Tour’s Order of Merit since 2007.

Rose is just the third player to follow a WGC title with another victory the following week, joining Tiger Woods and Rory McIlroy.

6. Remember those ridiculous pre-tournament publicity photo shoots before the WGC-HSBC Champions, the one this year in which players soared through the air in a harness? Yeah, Henrik Stenson injured himself during it.

“I’m not Superman even though certain people thought I was Superman,” he said after tying for 35th in Turkey.

Stenson said he’s been dealing with a rib injury the past two weeks and is set for an MRI this week. The injury will cause him to miss the final two events of the European Tour season.

7. The European Challenge Tour wrapped up its season last week, with the top 15 in the points standings earning cards on the big tour next year.

One notable name who graduated: Chase Koepka, Brooks' younger brother. He finished ninth on the money list and will have full status next year on the European Tour.

8. Tiger Woods made news last week with what he wrote and what he said.

First, the headline you surely have seen by now: That Woods will return later this month at the Hero World Challenge, a stunning decision by a guy who was cleared for full golf activity only a few weeks ago and who vowed, this time, to take his recovery slowly.

And second, he appeared on legendary UConn women’s basketball coach Geno Auriemma’s previously taped podcast, where he dished on his recovery (I'm just a s--- giver who wants to mix it up again with the boys!), his caddie situation (Joey ain’t going anywhere!) and the state of his game.

“I can’t believe how far I’m hitting the golf ball,” he said. “I’m back to hitting it my full numbers, and not really trying to do that. I didn’t realize how much I had dropped off because of the pain in my back … just because I had lived this from day to day and couldn’t tell the difference. But now I can tell the difference, and my posture is so much better over the golf ball.”

A golf ball, he says, that is flying way too far …

With her title defense at the Japan Classic, Shanshan Feng is projected to move to fifth.

The top 5 players after this week’s Blue Bay LPGA will win the $1 million CME Globe if they also win the season-ending Tour Championship.

10. Ryu’s time at the top of the Rolex World Rankings has come to an end.

S.H. Park is expected to pass her for the world No. 1 spot, even though she didn’t play in last week’s event.

Ryu needed to finish T-6 or better last week to hold on to the No. 1 ranking, but she tied for 33rd, same as Thompson, who also had a chance to ascend to No. 1.

Jason Day and his wife, Ellie, announced that they’re expecting their third child sometime in June.

That’s cause for celebration, of course, but also, apparently, some consternation, since it has put Day’s status for next year’s U.S. Open at Shinnecock in jeopardy … even though the couple doesn’t yet have a due date.

"Although I’ve had some good results at the U.S. Open" – he has five top-10s in seven Open starts – "Ellie and I are really excited about our third child and I want to be there to support her. I’m not missing the birth."

Nor should he. But can’t we address this in, like, May?

Can’t Believe That Didn’t Work Out: Bubba Watson’s Volvik deal. Opting for bold colors and a big payday, Watson had one of the worst seasons of his career and showed up in Vegas without a ball deal. He is playing a Titleist ball, like the ol’ days, but without a contract.

ANOTHER Feel-Good Story: Marc Cayeux. After 27 surgeries following a horrific car accident in 2010, the 39-year-old Zimbabwean made his first cut, on the Sunshine Tour. Your trusty scribe profiled the inspiring Cayeux last year.

Sneaky-Good Fall: Chesson Hadley. After a strong season on the Web, the lanky 30-year-old has kept it rolling this fall, racking up three consecutive top-5 finishes.

Good on You, Part 1: Charley Hoffman. Donating all of his winnings from last week’s event to the Vegas relief fund, Hoffman tied for 18th and pledged $97,600 to the victims of the Oct. 1 mass shooting.

Good On You, Part 2: Annika Sorenstam. After hearing about the high school girl who won the boys section tournament in Massachusetts but did not get to keep the trophy or advance to the state tournament, Sorenstam invited Emily Nash to her AJGA invitational event in February.

Big Tiger Guy: Doc Rivers. The Clippers coach told a hilarious story this week about the time he tried to get ejected so he could watch Woods make a run at the Masters. It’s easy to forget now that Tiger, in his prime, was must-see TV.

Well if Doc gets thrown out tonight, you know why. pic.twitter.com/fUHjQgadO3

Bye, College: Cameron Champ. Champ, a senior at Texas A&M and one of the breakout stars of the U.S. Open, advanced to the final stage of Web.com Tour Q-School, which led to his decision to leave school at the halfway point of the season. He will make his pro debut this week in Mexico. That’s a tough break for the Aggies, but they didn’t seem to need him in the fall, winning three times and sitting at No. 4 in the rankings.

Do It For Twitter: Donald Trump. He clearly was impressed with the way he got through this shot, posting it to Twitter after his round with Japan’s prime minister (Shinzo Abe) and best golfer (Hideki Matsuyama) Sunday at the 2020 Olympic host course.

Blown Fantasy Pick of the Week: Smylie Kaufman. A winner here in 2015, he turned around a sub-par year with a tie for fourth at the previous week’s Sanderson Farms. Then he turned around and slumped to a 75 in Round 1 on his way to a missed cut. Sigh.