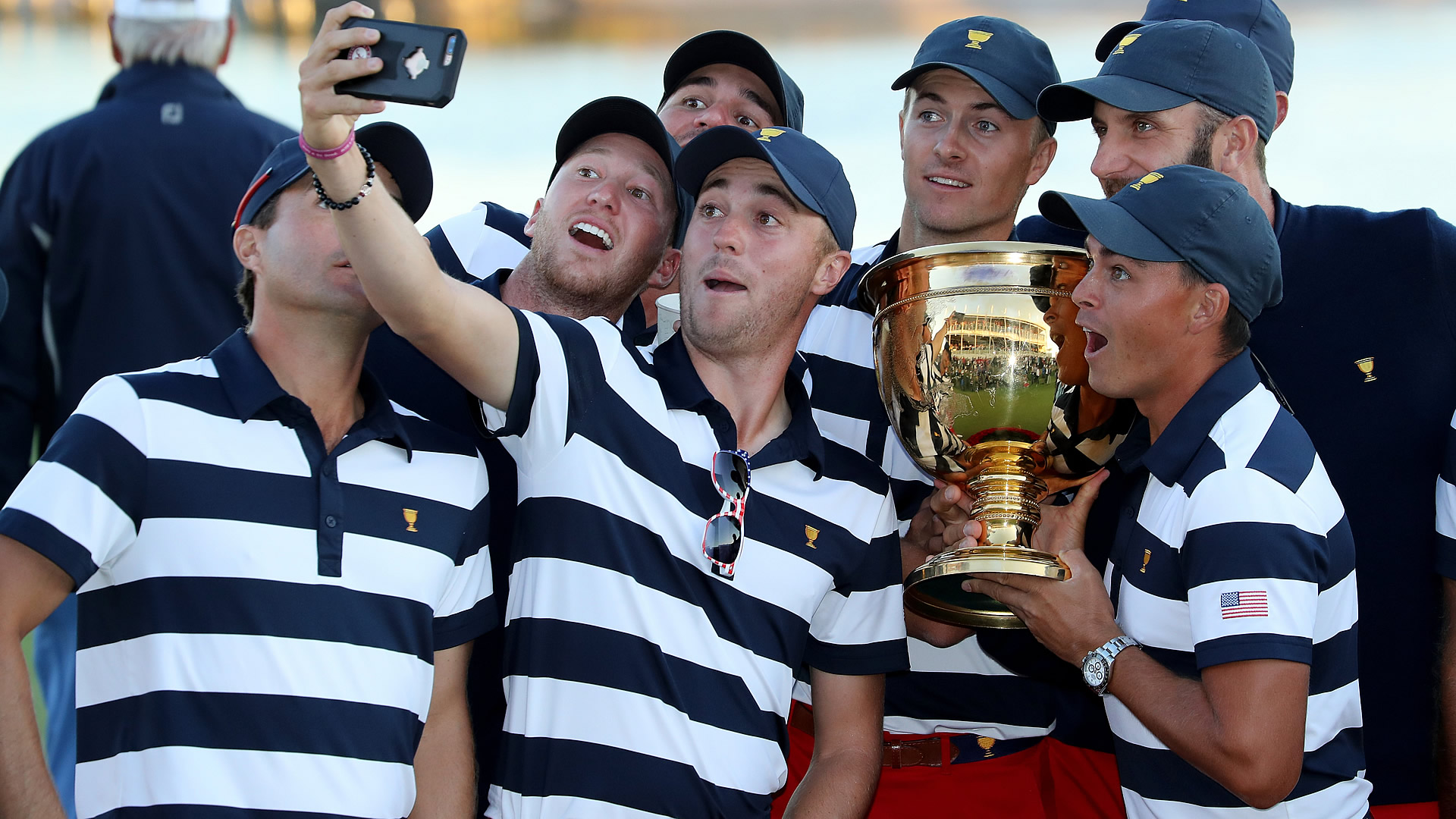 So emphatic was the Americans’ performance at the Presidents Cup that it threatened to render the event insignificant.

Save for a sloppy Sunday singles session – predictable, given the U.S. team’s monster lead – the Americans were nearly perfect during the competition at Liberty National.

They continued to build off the momentum they started at Hazeltine. Steve Stricker solidified his bid for the 2020 Ryder Cup captaincy. And old partnerships continued to thrive (Jordan Spieth-Patrick Reed), while new ones emerged (Justin Thomas-Rickie Fowler).

The result was total domination, a four-day showcase that lacked any competitive drama.

Not that the Americans were complaining.

The core of this U.S. team should be a force for the next decade … and Patrick Cantlay, Peter Uihlein, Ollie Schniederjans (and maybe Xander Schauffele) are all in the pipeline.

2. The Internationals needed to win the singles session (7 ½ to 4 ½) just to avoid what would have been the worst loss in Presidents Cup history.

Instead, it wound up as the third-most lopsided result:

3. It’s hard to pick an MVP from the American squad; there were several to choose from (click here for U.S. report cards). Dustin Johnson was the only player to appear in all five matches and not suffer a loss, as the world No. 1 went 4-0-1. Rickie Fowler and Phil Mickelson both went 3-0-1. (Speaking of Lefty: Since he called out 2014 Ryder Cup captain Tom Watson at Gleneagles, he has gone 8-1-3. He welcomed the pressure and scrutiny ... and then delivered.)

The biggest disappointments? Captain’s pick Charley Hoffman was the only player on the U.S. side with a losing record (1-2), though both of those narrow losses went down to the final two holes.

Not surprisingly, the International side was littered with guys who failed to show up on the big stage. Captain’s pick Emiliano Grillo, who has struggled mightily during the second half of the season, went 0-3. Adam Hadwin only earned a half point (0-2-1). Marc Leishman, who won one playoff event and nearly took another, went 0-3-2.

4. But the biggest difference between the two teams this year was the performance of their best players. While DJ, Spieth and Thomas went 10-2-3, the Internationals’ top three players threw up a 2-8-4 record. If that trend continues, it won’t matter the format or how many points are available. They're still going to get smoked.

5. PGA Tour commissioner Jay Monahan has a lot on his plate, but one of his top priorities should be to fix this competition.

Never have there been more calls to overhaul the Presidents Cup, and for good reason. The Americans’ record in the biennial event is now 10-1-1. This is not a good or compelling product.

6. Problem is, the solutions aren’t so simple.

Monahan’s predecessor, Tim Finchem, always resisted tweaking the format, finally reducing the number of available points to 30 before the 2015 matches. It still wasn’t enough. Not only does the event not need to be spread out over four days – the Tour seems obsessed with differentiating the Ryder and Presidents cups – but 30 points clearly still puts the weaker International squad at a disadvantage.

Team USA will argue against any format change, and they should – as currently constructed, the Presidents Cup presents a perfect opportunity to reinforce the concepts of the Ryder Cup committee, try out new partnerships and build momentum for the future. Why should they be penalized for playing better golf?

But after this blowout, and the lack of interest over the weekend, Monahan and Co. will have no choice but to make a change, for the sake of the PGA Tour.

7. Ernie Els, who likely will take over the International team in 2019, said Sunday that the points reduction should go even further in hopes that it will negate some of the Americans’ depth. He also wants his side to take greater ownership, breaking away from the Tour rules in terms of the selection process.

“We just want to feel that we are being treated fairly and that we get something going our way a little bit,” he said. “The future of the cup is important. We want to have it as competitive as we can. … We have to go back to the drawing board.”

8. The belief here is that the format should be blown up completely.

Usually, these types of results are cyclical, but there have now been 12 Presidents Cups. When the event heads to Royal Melbourne in 2019, the Internationals will be 21 years removed from their last victory.

This is not a small sample size. They are unable to make this a close competition.

The Tour should try something totally different. Golf already has one pressure-cooker at the end of a long season, so embrace the exhibition aspect. Introduce a scramble session. Make it a co-ed event. Combine it with the Tour Championship and $10 million payout. Do something different.

1.) He is not close to returning. Though he looks fit and healthy – he said he has been working out twice a day – Woods still can only hit 60-yard wedge shots, per doctor’s orders. It remains to be seen when – or if – he’ll be given the green light to start hitting full shots, and he acknowledged a scenario in which he might not return to competition: “I don’t know what the future holds for me.”

2.) If he can’t (or doesn’t want to) play again, one thing is clear: He would be an incredible performance coach. He is revered by all of the game’s young stars. He has a brilliant golf mind. And he clearly needs something to occupy his time, as evidenced by his all-in approach to the past two team competitions. Not only would it keep him involved in the game, but it also would assuage his ego and allow him to advise and mentor as he saw fit. He could pick and choose his clients – J-Day, Rickie, JT and P-Reed all seem like a logical starting place – and help them maximize their potential.

Everyone wants Woods to play golf again – he took the game to heights never before seen. But wouldn't it be fun to watch that next phase of his career?

Two weeks after prematurely shortening the Evian, the fifth major of the year, to 54 holes and making the playoff participates compete in wind, rain and hail, the tour sent the players out into dangerous weather conditions at the New Zealand Open.

Belen Mozo said the players don’t have a say and are “like sheep.” Brittany Lincicome called it a “freaking joke.” Danielle Kang tweeted that she watched fans “get blown over and hit by umbrellas.”

11. Why hello, Rory. Over the weekend at the British Masters, he shot 64-63 and came up three shots shy of first-time winner Paul Dunne, who closed with 61.

McIlroy's 13-under weekend was the lowest finishing stretch of his career.

This week’s Dunhill Links is McIlroy’s final chance to win an event this year. He has won at least one event every year since 2008.

12. Ah, yes, it was only a matter of time before the rabbit-eared Ian Poulter weighed in on the relaxed rules allowing spectators to take photos and videos of players during competition.

After a quick-fingered fan distracted Poulter during the British Masters, leading to a water ball, the Englishman sounded off on the new tournament trend, telling reporters: “We’ve allowed them all to take pictures and videos and we tell them to put them on silent and it doesn’t work. It just doesn’t work! It doesn’t work! You get distracted on the wrong hole at the wrong time and it’s extremely penal. It’s really f---ing annoying.”

You know you're 47 when ... you nearly crop yourself out of an epic selfie, with former Presidents Clinton, Bush and Obama:

When you can take a selfie with three US Presidents, you do it!! pic.twitter.com/E3pNlZ07gs

Break of the Week: Paul Dunne. Trying to hold off McIlroy down the stretch, Dunne’s wedge shot on 11 landed on the back fringe, but his ball sucked back off a sprinkler head, to 3 feet, setting up another birdie.

Demons Buried?: Anirban Lahiri. The controversial wildcard pick went 1-1-1 for captain Nick Price, but he said emphatically, after a Saturday fourballs win and a halved singles match that, “I’ve well and truly buried the demons from South Korea,” when he missed a 4-footer to tie the overall match. Hmmm …

Moment of the Week: Jordan Spieth singing. This is amazing.

Hit of the Week: Charley Hoffman. He delivered a bigger blow to an American than anyone on the International side.

Welcome to the Tour, Rook: Web.com graduates. With the Web.com Tour Championship pushed to a Monday finish, a few dozen players will be rolling into Napa, Calif., will little rest and prep before the season opener. Good luck.