Monday Scramble: Win and where 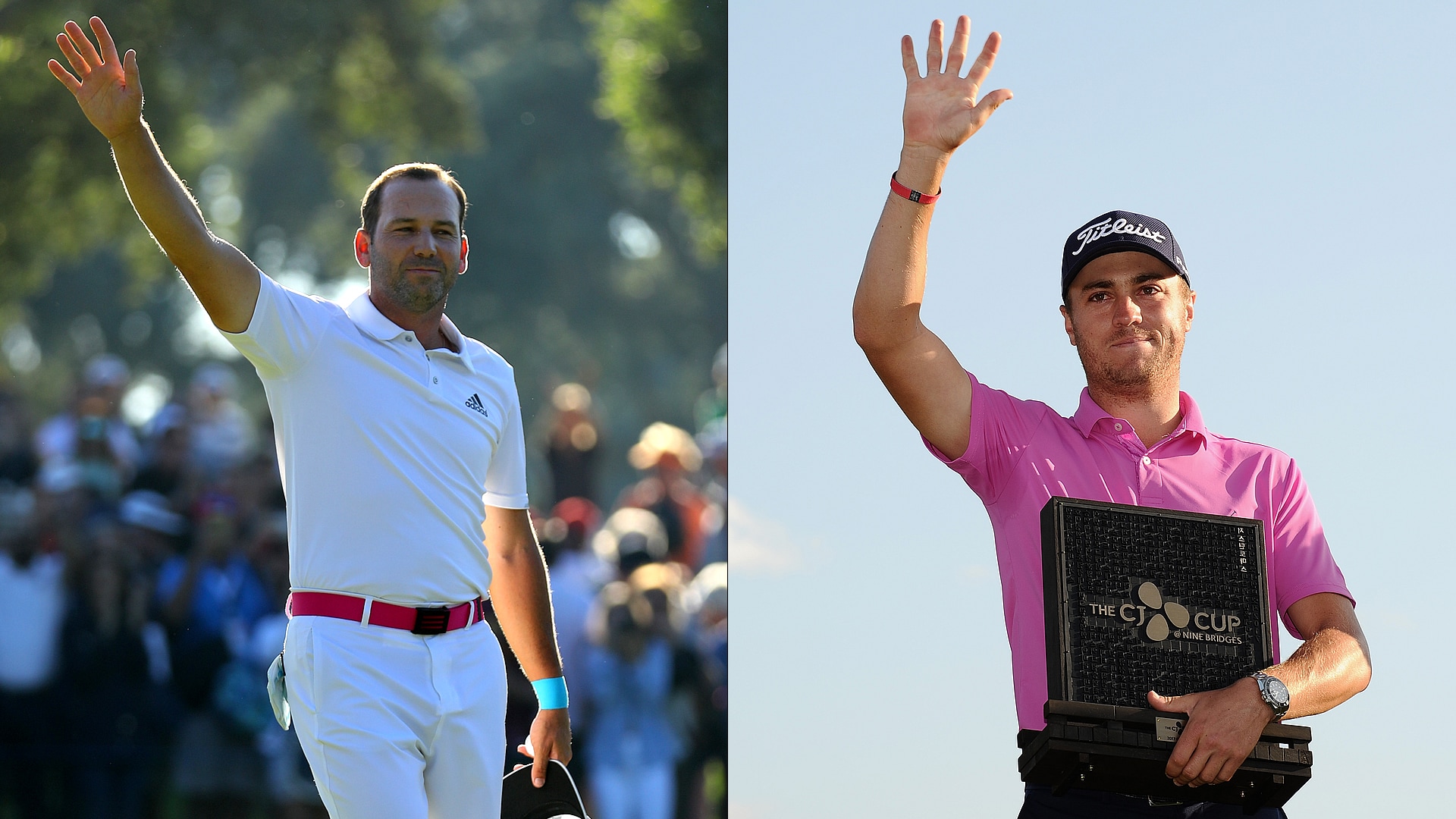 Now with five and a half weeks off, Thomas has plenty of time for reflection.

The most obvious question that will come to his mind: Now how am I going to back up THAT?

Thomas capped the best run of his career with a playoff victory Sunday at the lucrative CJ Cup. Over the past 52 weeks, he has six victories (including his first major), a FedExCup title, a Player of the Year trophy and more than $20 million in the bank.

Of the many goals that Thomas set for himself, both large and small, he met or exceeded almost all of them. Continuing to improve next season will be a challenge, because there isn’t as much ground to cover, but the 24-year-old showed that his ceiling is as high as anyone’s on Tour.

This is a break well deserved.

1. The par-5 18th hole at Nine Bridges will make course-architect snobs break out in hives, but it provided plenty of drama at the CJ Cup.

Both Thomas and Leishman went for the well-protected green in two shots during the playoff.

Leishman was unsuccessful, leading to a bogey but no regrets.

“If you go down,” he said, “you want to go down like that. I’d rather attack and try to take it. I would certainly sleep better at night just doing that.”

Even after seeing his opponent rinse his approach, Thomas didn’t back down, either.

“I didn’t travel all this way to make this a three-shot hole,” he said.

That led to a two-putt birdie and the victory.

2. If Thomas was low on energy two weeks ago at the CIMB Classic, then he was really running on fumes in South Korea. And his patience was tested all week, when officials cut hole locations in difficult positions on Friday to protect par, and then the wind gusted (and swirled) to 30 mph over the weekend.

It’s a testament to his mental toughness that he was able to overcome a 71st-hole bogey and put away Leishman, who notched his third top-3 finish in his last four starts.

3. Here’s how the top of the world rankings look heading into the final World Golf Championships event of 2017:

It’s the first time since May 2010 that Americans hold down the top three spots. Back then, it was Tiger Woods, Phil Mickelson and Steve Stricker – an average age of 39.2.

4. A reminder that last fall, Thomas was ranked 35th in the world.

Here are some of the areas in which Thomas has seen the most improvement, year over year:

If Thomas can improve his driving – even with his awesome length, he ranks only 32nd in strokes gained-off the tee – then his six-win 2017 might just be the beginning.

5. No Ryder Cup points are available this fall, for the second consecutive Ryder Cup.

Though that’s unlikely to affect the status of a star like Thomas, it’s a potentially big deal for someone like Pat Perez, who won the CIMB and followed it up with a tie for fifth at the CJ Cup.

6. Garcia’s Masters hangover is over, after the Spaniard served as both host and champion at the European Tour event at Valderrama hosted by his foundation.

Since his life-changing victory at Augusta, he managed only one top-10 in 10 PGA Tour starts, and his runner-up at the BMW International Open was his best showing worldwide.

A lot has been going on, of course. Garcia got married. He’s expecting his first child next spring. He adjusted to life as a major champion. And it was announced last week that he and longtime sponsor TaylorMade are parting ways.

Valderrama was the perfect landing spot for another Garcia reboot – he has finished in the top 5 in eight of 13 career appearances there.

7. Interestingly, this was Garcia’s first three-win season since 2008.

He moved to 14 career titles on the European Tour, one clear of Rory McIlroy for the most among players currently under 40.

8. After wondering whether she would ever win again, Eun-Hee Ji snapped an eight-year winless drought by taking the Swinging Skirts – by six.

Perhaps even more interesting was the brief reappearance in Taiwan of local hero Yani Tseng. Mired in a miserable slump, the former world No. 1 hasn’t won anywhere since 2012.

A strong final round briefly vaulted her inside the top 5, but she stumbled down the stretch and eventually tied for 17th – still one of her best results of the year.

“I feel the nerves and I feel the pressure,” she said, “but it was great pressure and good news. I haven’t had that for a while.”

9. In the least surprising development of the week, Bernhard Langer won the PGA Tour Champions playoff opener, eagling the final hole and creating even more separation from Scott McCarron.

Though the field size is trimmed each week, like the FedExCup playoffs, the cut down from 72 to 54 players barely registered, seeing how those players have no chance to make any noise with Langer, McCarron, Kenny Perry and the rest of the senior stars monopolizing the top of the leaderboard.

Langer is on the verge of taking the money title for the ninth time in the past 10 years.

It’s why we opined last week that the senior circuit desperately needs a match-play finale to liven up its finishing kick.

10. About the only thing Langer has left to accomplish in senior golf is the record for the most victories all time.

Barring an injury, Langer could eclipse that record in 2019, when he’d be 62. Irwin was 61 when he earned his final senior victory.

Justin Thomas and Jordan Spieth are longtime friends. This was established a few years ago, when Thomas joined a Tour on which Spieth had already made his mark.

Well, for some reason, this storyline is still a thing, even after Thomas finally moved out of Spieth’s considerable shadow, winning the PGA Championship, the FedExCup and Player of the Year.

This was a real question posed to Thomas on Saturday night (emphasis is mine): Jason Day mentioned that he has never seen winds like this before. Are you used to such windy conditions? If you were to give Jordan Spieth any advice playing on this course, what would you say?

Unfortunately, Thomas (and, now, Spieth, to some extent) are used to such ridiculous queries. In his presser, Thomas shrugged it off and talked about the difficult conditions.

Well, the same reporter (we think) went back to the well on Sunday night, after Thomas prevailed in a playoff.

If you were to come back next year, would you convince your good friend Jordan Spieth to come with you?

Not only was that question insulting – as if Thomas’ victory, and presence, wasn’t enough for the reporter – it was absurd.

Thomas handled it perfectly: “I don’t care what he does.”

See You Next Year: Paula Creamer. The 31-year-old recently underwent surgery on her ailing left wrist, ending her season. Winless since 2014, she faces an uphill climb when she returns to competition.

What a Mess: KLPGA. A pair of players received two-shot penalties after they picked up their ball on what they thought was the green, and it was later determined that four other players had done that, too. Several players threatened to withdraw out of protest, the KLPGA wiped out all scores for the first round, and the head rules official resigned.

Mission Accomplished: Leona Maguire. Needing to make the cut to earn Symetra Tour status for 2018, the top-ranked amateur in the world cruised at second stage of Q-School. She won’t even attempt to play the finals; she’ll return to Duke for the spring semester and complete her degree.

Presidential Company: Hideki Matsuyama. The world No. 4 is scheduled to play a round with Donald Trump when the president makes his first Asia trip next month, according to Bloomberg.

New Home: Barbasol Championship. Beginning this season, one of the Tour’s opposite-field events is relocating from Alabama to Kentucky.

What Can't He Do?: Braden Thornberry. During the Ole Miss-Auburn game Saturday night, the reigning NCAA champion was asked to knock in a field goal using one of his irons. This is a lot harder than it looks!

ICYMI | @tberrygolf proved to be the most versatile @NCAA Champion after knocking one through the uprights during the @OleMissFB game pic.twitter.com/SnEoCUdIxN

Blown Fantasy Pick of the Week: Tony Finau. His runner-up finish in Napa was his third consecutive top-10. But he just didn’t have it halfway around the world, backing up an opening 67 with three consecutive rounds of par or worse for a tie for 26th. Sigh.