Monday Scramble: What we know and what we think we know 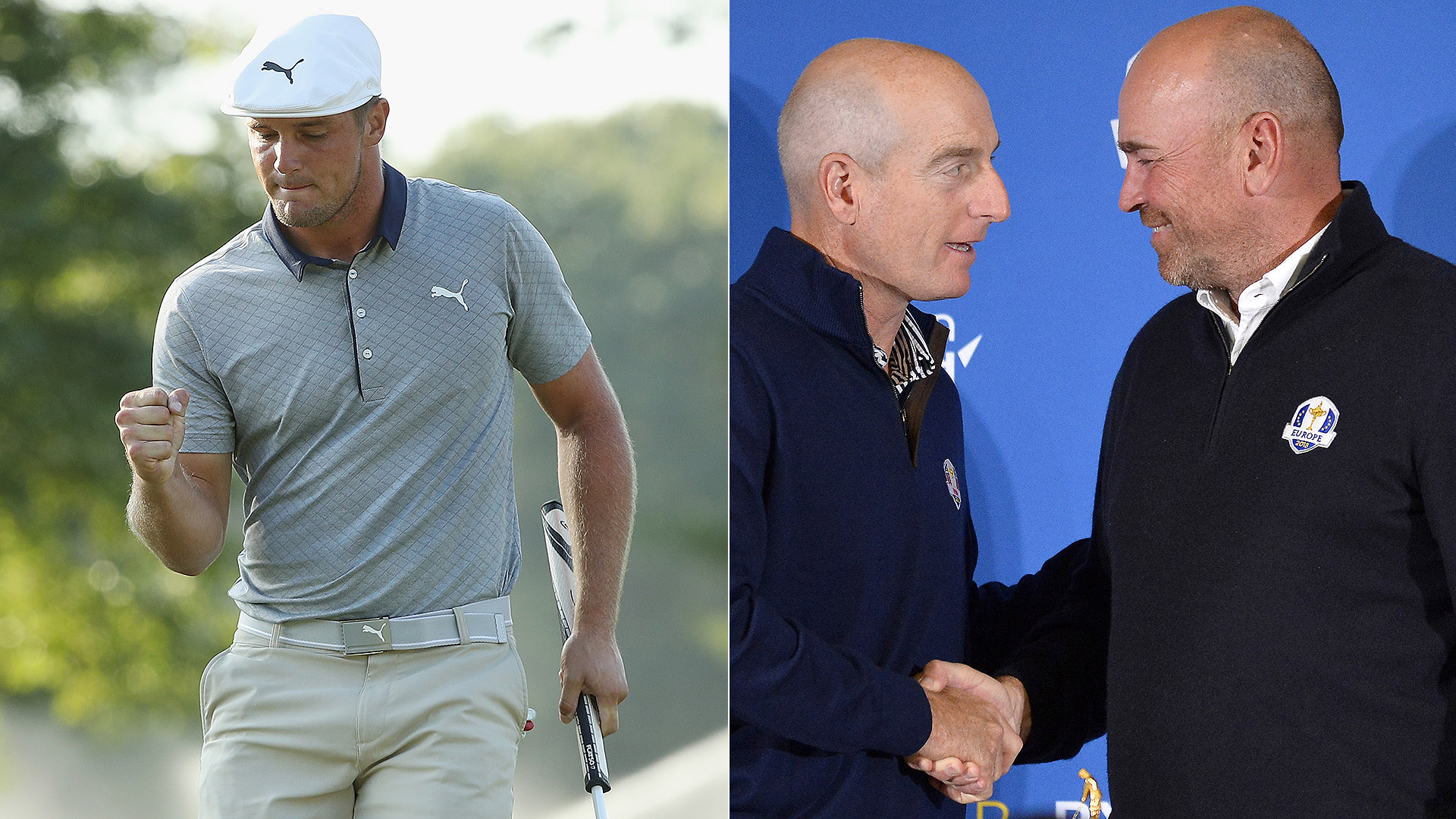 Bryson DeChambeau goes back to back, Tony Finau makes Jim Furyk's job even easier, Matt Wallace makes Thomas Bjorn's even harder, and more in this week's edition of the Monday Scramble:

The more we learn about Bryson DeChambeau, the more he looks like a longtime force.

The Dell Technologies Championship was another enlightening week for the Mad Scientist.

Not only did he dust his boyhood idol, 63-68, on Sunday, but he played another clinical final round in the last group to capture back-to-back playoff titles.

It was a statement win, in many ways.

He’ll be the top seed heading into the Tour Championship. He now has as many Tour wins as Brooks Koepka and Rickie Fowler (four). And he’s all the way up to No. 7 in the world – ahead of Rory McIlroy, Jordan Spieth, Jason Day and others – meaning he no longer can be viewed as just a quirky kid with an unorthodox approach.

He’s a bona-fide stud, with a rock-solid game and unassailable self-belief in his methods.

1. This will shock you, but DeChambeau is very dialed in with his game right now.

At The Northern Trust, he ranked fifth in strokes gained: tee to green and fifth in putting.

At the Dell, he ranked sixth in strokes gained: tee to green and sixth in putting.

His 34-under total through the first two playoff events is the best postseason score all time. The previous best was Vijay Singh, who was 30 under for the first two events in 2008. He went on to win the cup.

2. No matter what happens at this week’s BMW Championship, DeChambeau will be the No. 1 seed heading into East Lake.

That doesn’t guarantee much, other than a few more favorable scenarios.

No top seed has won the FedExCup since 2009 – or roughly a dozen format tweaks ago.

DeChambeau could go 3-for-3 in the playoffs, and if someone else in the top 5 wins the Tour Championship – right now, that includes Dustin Johnson, Justin Rose, Finau and Justin Thomas – he takes home the FedExCup. It’s one of the many reasons why the Tour is looking to overhaul the season finale.

DeChambeau is the fifth player under the age of 25 in the last 30 years to win three or more times in the same season. He joins Tiger Woods (three times), McIlroy (2012), Spieth (twice) and Thomas.

DeChambeau isn't yet on Spieth's and Thomas' level – he needs a major, or two, for that – but he's on his way there.

4. U.S. Ryder Cup captain Jim Furyk’s four captain’s picks are so painfully obvious that we can’t help but root for Furyk to throw a curveball, just so he has to somehow explain it.

It’s DeChambeau. And Woods. And Phil Mickelson. And Finau.

Nothing should change, even if one of the so-called “contenders” wins the BMW. Not Kevin Kisner. Not Patrick Cantlay. Not Brandt Snedeker. Not Xander Schauffele.

These are the four.

5. Mickelson hasn’t been on form of late, but he closed the Dell Technologies with a final-round 63 and then dropped the mic afterward when he reminded everyone that he’s the second-ranked putter on Tour this season. “It would be a strong argument whether I was a veteran player, a rookie or a kid in high school,” he said.

Finau’s selection should be just as automatic. The tie for fourth in Boston  was his 10th top-10 of the season – second-most on Tour, behind only world No. 1 Johnson. The birdie machine is an ideal fourballs partner. (Just ask Furyk – Finau sank a PGA record 10 birdies while in his group.) He’s friends with everybody. He’s showed up on big stages all year long.

And even though Finau hasn’t won, this point should not be forgotten: No one else has done ANYTHING to threaten his spot.

6. As straightforward as Furyk’s picks appear to be, the opposite is true for European captain Thomas Bjorn.

Pass him the Advil, because he's about to have a rather large headache.

Ian Poulter is a lock for one of the four spots. So, it seems, are Henrik Stenson, who is recovering from an elbow injury, and Paul Casey, who rejoined the European Tour this year to make the team and who’s ranked 16th in the world.

Now, the big question: What to do with the fourth pick?

7. Matt Wallace seemingly wasn’t on the radar before last week, but he birdied 10 of his last 13 holes and prevailed in a playoff at the Made in Denmark, the final Ryder Cup qualifying event on the European circuit. That gives him three wins in the past six months – more than any other contender – but he’d be the sixth rookie on the European squad.

Ryder Cup experience is about the only thing that Sergio Garcia has going for him at the moment – but, indeed, that 19-11-7 career record looms large. Since April he’s been dismal, though his only top-10 in his past 12 starts came at the French Open – held at Ryder Cup host site Le Golf National.

Or could Bjorn opt for another Spaniard, Rafa Cabrera Bello? He went 2-0-1 in the 2016 matches, has a significantly better record this year than Garcia and contended for the title against a top field in Boston.

Or maybe he’ll select Thomas Pieters, who needed a pick in 2016 and proceeded to have the best mark of any European, going 4-1 at Hazeltine. He has three top-10s in his past five starts and a ready-made pairing with McIlroy.

Bjorn will announce his picks at 9 a.m. ET Wednesday, and it promises to be interesting.

8. A few back-nine stumbles by Woods made the BMW Championship a lot more stressful than it needed to be.

As a result, he failed to make up any ground in the FedEx race.

He was 20th at the end of the regular season.

He was 25th at the end of the first playoff event.

And now he's still 25th as he heads into the third leg of the postseason.

Though Woods is still in decent shape – the top 30 make it to East Lake – he’ll need to grind harder than perhaps he expected to. He tied for 46th at Aronimink in his only prior experience there, in the 2010 AT&T National.

9. It might be a good thing that the playoffs are getting overhauled next year, with the reduction of an event and, reportedly, a head start for the FedExCup leader.

Because it still doesn’t make much sense.

Finau has had a strong, consistent season … but he has no business sitting ahead of Brooks Koepka (two majors) and Thomas (three wins, including a WGC) in the standings.

Finau is fourth, after another playoff top-10. Thomas is fifth and Koepka is sixth.

Of the many ways to lose a tournament, this has to be one of the most disheartening.

Joe Durant was in position to win the PGA Tour Champions’ Shaw Classic until he yipped this tap-in on the 17th hole. He fell one behind and couldn’t make up the ground on Scott McCarron, who used an ace on the 14th hole to win.

Durant misses a short one at 17 and falls out of a share of the lead. @ShawClassic pic.twitter.com/3IXLGWd2iW

Get Used to the Name: Matthew Wolff. The Oklahoma State sophomore, who holed the clinching putt for the Cowboys at the NCAA Championship, returned from a wrist injury this summer to win his first college event – at Pebble Beach, no less, after shooting 17 under. He’s the reigning NCAA Freshman of the Year, after posting four runners-up during his first year on campus.

Stop Trying to Make This a Thing: Matt Kuchar on the Ryder Cup team. He just finished his worst season in years, failing to advance to the BMW.

First For Everything: Talkin’ Tiger. He didn’t talk after his closing 71 in Boston, the first time in 60 rounds this season that he didn’t speak with the media after signing his card. Woods takes to the podium FAR more often than any other player on Tour, even after the most ordinary of days, so this one-off can easily be excused. And besides, he needs to rest his voice for the 90-minute Ryder Cup selection show special on Tuesday night.

Ain’t Scared: Bryson. Paired with (his likely Ryder Cup partner) Woods during the third round in Boston, Bryson hung a 63 on him – the lowest score recorded by Tiger’s playing partner since 2014 – and left little doubt that he can handle the spotlight.

Sweating It Out: Peter Uihlein. He birdied the last three holes to move from 83rd to 64th in the points standings, ensuring that his season will continue for at least one more week.

Don’t Look Now, But …: Spieth is putting better. The Dell was his sixth consecutive event with a positive strokes-gained putting week. That narrative, at least for now, can be retired, and he can focus on the other holes in his game that have kept him out of the winner's circle for more than a year.

Marina Number 5: Marina Alex. With a closing 65, she erased a six-shot deficit to win the Portland Classic and become the fifth American – joining Brittany Lincicome, Jessica Korda, Michelle Wie and Annie Park – to win on the LPGA this year.

How to Handle Defeat: Eddie Pepperell. Some will shed tears when Bjorn’s number doesn’t pop up on their phone this week. Pepperell will not be one of them. This guy is the best.

Well, no Ryder Cup this year for me which is a shame because I was really looking forward to winning zero points. Week off now then onto KLM Open but not before a pro am in Bordeaux....... Thanks to Fleming and his team in Denmark for another tournament.

Blown Fantasy Pick of the Week: Jason Day. The best putter on Tour, he arrived in Boston with five consecutive top-20s and a strong course history with three top-10s and eight top-25s at TPC Boston since 2008. Then he shot rounds of 76-73 and beat only four players. Sigh.