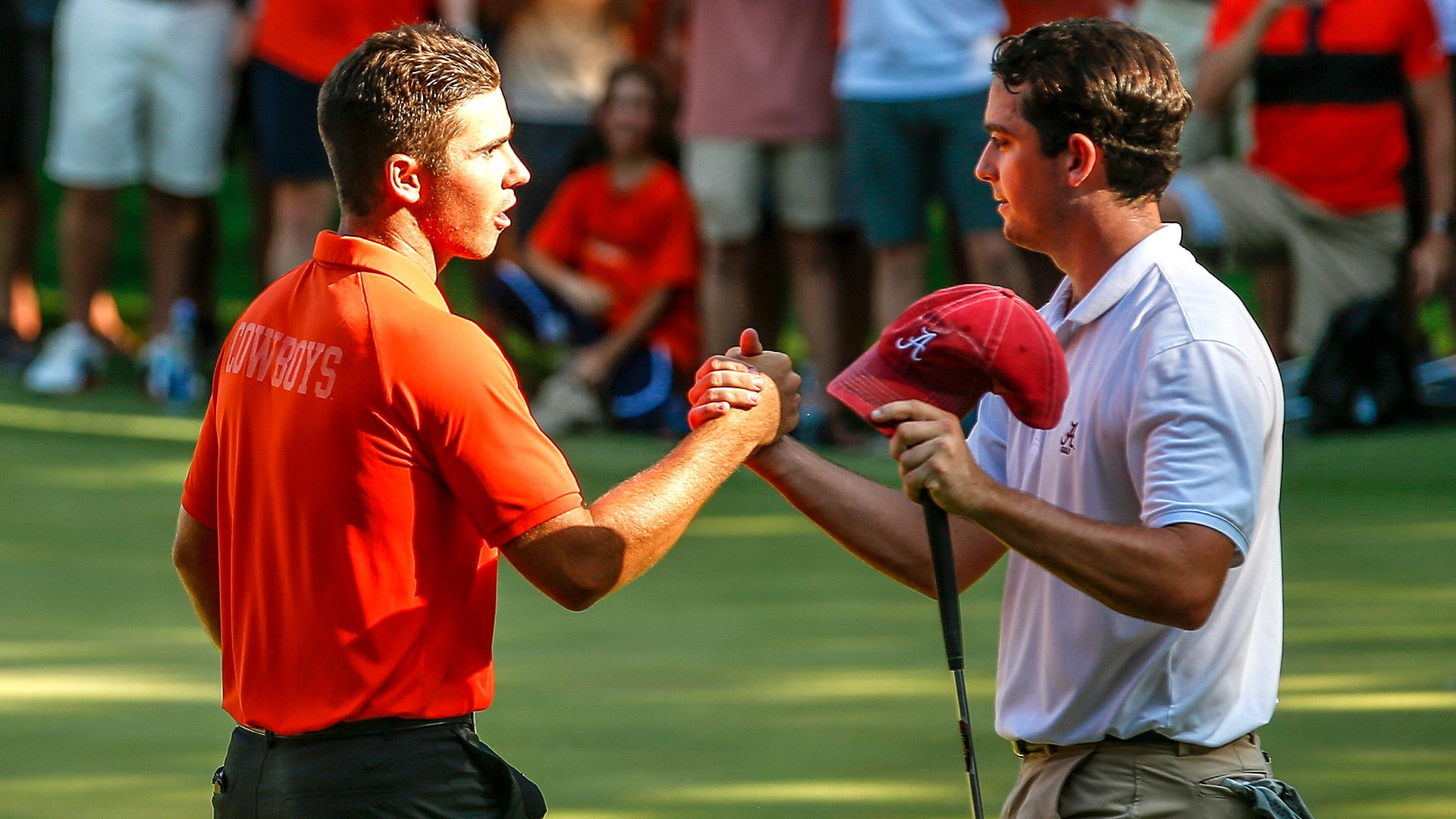 STILLWATER, Okla. – The lopsided NCAA final between Oklahoma State and Alabama – 5-0, in favor of the host Cowboys – didn’t properly reflect the quality of both teams at Karsten Creek.

Here are four short stories of players who, in a few years, will be playing for big checks on Sundays.

A FEW YEARS AGO, Oklahoma State coach Alan Bratton was hosting a recruit for lunch when the prospect brought up the results of a recent junior event. He had finished second to a Southern California kid who had shot 61.

“I inched forward in my seat and said, ‘Oh, really? What’s his name?’” Bratton recalled.

His name was Matthew Wolff – the breakout star of this NCAA Championship.

Bratton told his then-assistant Brian Guetz to follow Wolff at an upcoming AJGA invitational. Guetz texted him a video of Wolff’s homemade, Jim Furyk-esque backswing and wrote, “Wait till you see this. You’re going to love it.”

Bratton, a former All-Everything at Oklahoma State who helped the team capture the 1995 NCAA title, approaches recruiting from a player’s perspective.

“I’m looking for things I’ve seen before, and a swing I think will repeat and that the kid owns,” Bratton said. “And Matt had that.”

Wolff might resemble a home-run hitter at the top of his backswing, but in the impact area – the only area that matters – few in college golf are better. A biomechanist from Cal State Fullerton recently found that Wolff pressures the ground (and thus creates his incredible power) better than anyone he’d ever studied, including PGA Tour players.

An example: On the par-5 ninth hole during stroke play, Bratton and Wolff discussed starting a driver at a fan in an orange shirt off in the distance. Wolff blasted it 375 yards, and “as it’s coming down,” Bratton said, “I told Matt, ‘Wait for it. Wait for it.’ And it came down right on top of him. Like, do you realize how narrow a person is?”

Wolff became a first-team All-American this season, and was named the National Freshman of the Year, despite failing to win an event; he finished runner-up in four of the biggest tournaments of the season. Wolff now also has a career highlight, as he earned the clinching point for the Cowboys as they captured their first NCAA title in 12 years. 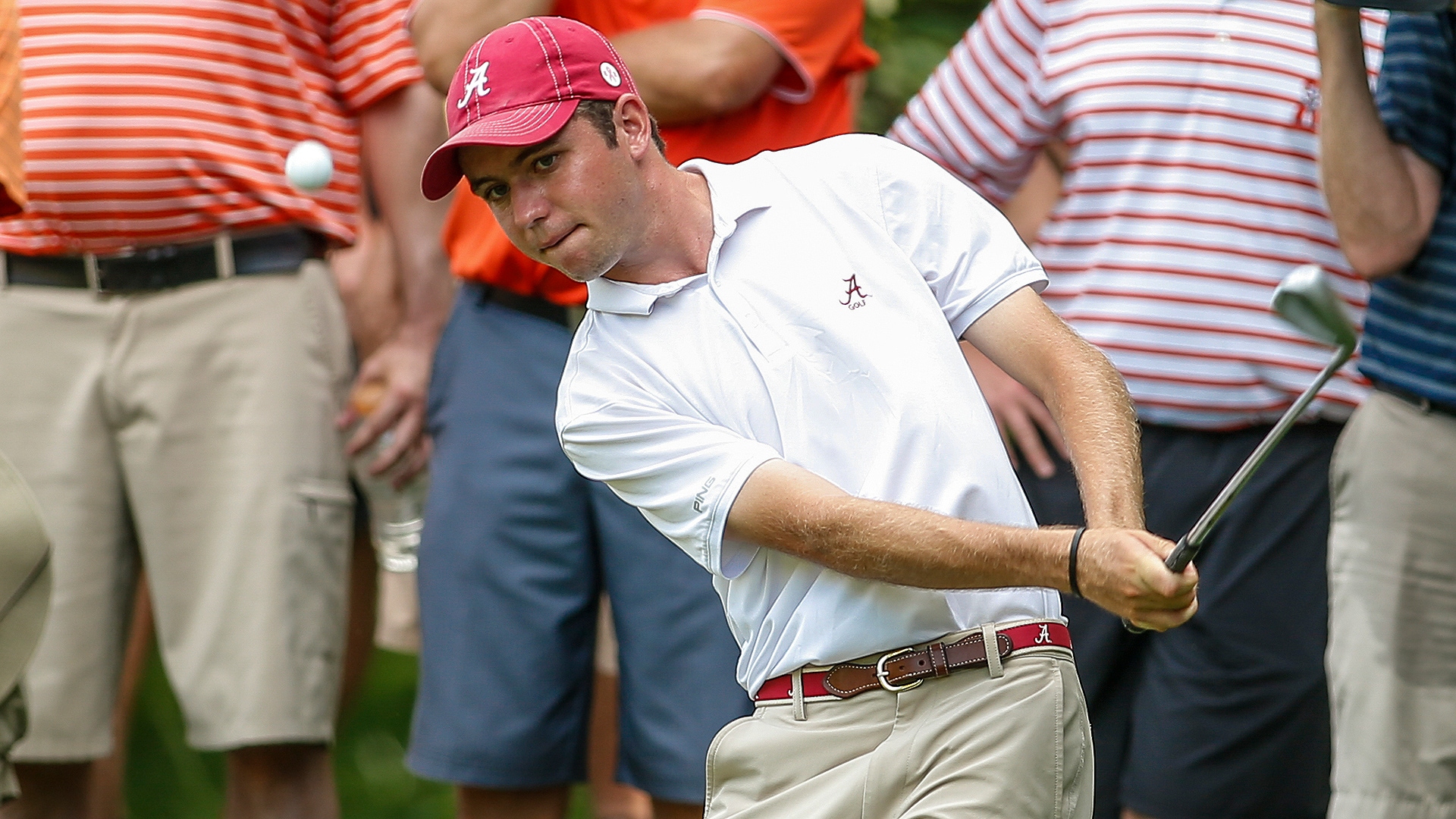 LAST WEEKEND IN TUSCALOOSA, Alabama coach Jay Seawell set up a private meeting between his former and current stars.

“I’ve always tried to bleed the two of them together,” Seawell said. “Not only is Justin No. 1 in the world, but he has an incredible golf IQ. It’s off the charts, and that’s where Davis needs to learn the most. The more I can put him around that, the better off he’ll be.”

Seawell said that Riley, a junior, is “as good as anybody who has played at our place physically.”

And that includes Thomas.

Riley was a top recruit who has high finishes in every major amateur event. He even looks the part of a future Tour pro, with the perfect build and gorgeous swing.

The coaches recently ran him through a series of ball tests using TrackMan. Riley hit 25 balls with a 6-iron – and had only a yard and a half of variance.

“I’m like, My word,” Seawell said. “You’re going to see Davis Riley a lot on TV in the future. It’s a high-quality game.”

BRATTON HAD FLOWN TO Scotland to watch another recruit at the European Boys Championship when he stumbled into a newcomer on the Norwegian national team.

It was his first introduction to Viktor Hovland.

Bratton had already secured the commitment of another player on that squad, Kristoffer Ventura, and he hoped that decision would influence Hovland two years later.

Ventura was the player, Bratton said, who coaches will “pick out every time.” He had a sterling record. Bombed it off the tee. Could hit every shot.

Hovland wasn’t yet established, but he made such an impression on Bratton that he didn’t have a fallback option for the class of 2020 – Hovland was the only player he wanted. Hovland visited Stillwater a week before signing day.

“We waited on him,” Bratton said, “and fortunately we were able to get him.”

Hovland and Wolff formed a formidable 1-2 punch at the top of a deep, talented roster, with both earning first-team All-American honors.

Bratton sent off Hovland first in the championship match, mostly because his sophomore doesn’t want much time to warm up. He didn’t hit any balls between the quarterfinals and semifinals on Tuesday, and he normally doesn’t last more than 20 minutes on the range. 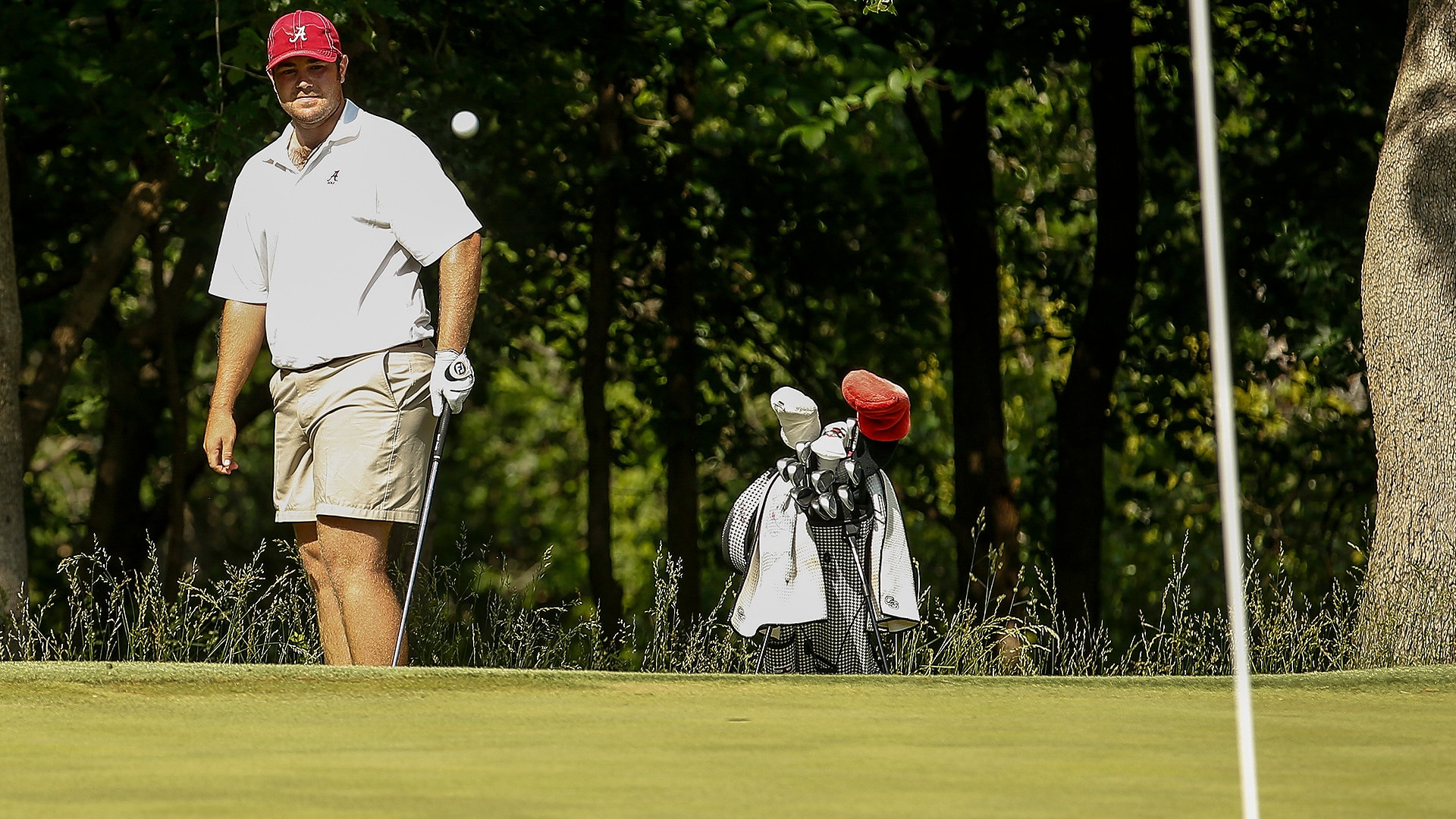 SENIOR JONATHAN HARDEE LANDED in the anchor spot in Alabama’s championship lineup, and it had the feel of a career achievement award.

During his freshman season, Hardee partially dislocated his right shoulder while bow hunting. He nursed the sprain for six weeks, but he continued to play through the discomfort until he fully tore his labrum, all the way down to his biceps, during the spring semester of his sophomore season.

Seawell told Hardee that the prudent move was to undergo surgery so he could return in time for the start of the fall season. But Hardee wouldn’t listen.

Held together by black athletic tape, Hardee was playing the second round of the 2016 NCAA regionals when his shoulder popped out on the 18th hole. The school trainer walked up to Seawell and said that he didn’t think Hardee would be able to continue. This happened before the substitution rule was implemented, so Seawell faced the prospect of having to count each of his four remaining players’ scores, with no wiggle room in the high-stress NCAA Championship qualifier.

The trainer later returned with a different message.

“That boy is going to play,” he said.

Two weeks later, at nationals, Hardee was in sixth place individually, and the Crimson Tide were hovering around the top-8 team cut line, when his shoulder popped out again while he tried to gouge out of deep rough. He couldn’t feel his arm the rest of the round. He came home in 44, with tears in his eyes.

“It hurt so freakin’ bad,” Seawell said, “and he’s fighting with all that he can.”

A week later, Hardee underwent surgery to repair the torn labrum – the same injury that former Texas star Beau Hossler had suffered, in his left shoulder, that led him to bow out of the 2016 championship match – and missed the next 10 months.

Without Hardee in the lineup the following season, Alabama was relying on a walk-on, ranked 63rd in the country and in danger of missing the postseason because of the .500 rule. Hardee was a steadying presence upon his return, and he finished inside the top 20 at last year’s NCAAs in one of his first events back.

The final against Oklahoma State didn’t hinge on Hardee’s match – and in fact, he was steamrolled, 8 and 7, by a red-hot Zach Bauchou – but there was no one Seawell would rather have had in the anchor spot.

“He deserved that spotlight for what he’s done and how he’s done it,” Seawell said. “He’s tough. He’s strong. He’s bigger than his shoulders are wide.”

Matthew Wolff was disqualified from the Masters following the second round after signing for an incorrect score. 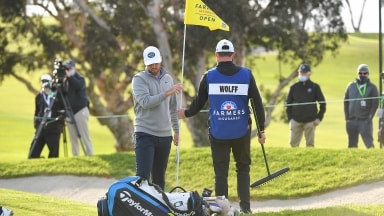